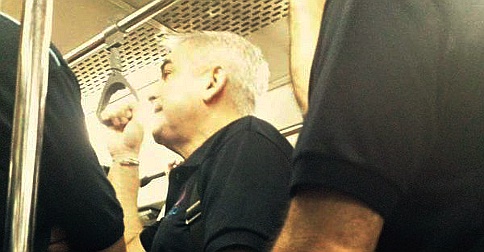 Businessman Jaime Augusto Zobel de Ayala II, the chairman and CEO of Ayala Corporation, was spotted on Monday riding the MRT around 6 a.m. According to a report from ABS-CBN News, he took the train as part of an orientation tour to check on the new "beep cards" system, as well as the "interconnection" of the mass rail system. Ayala Corp. is a partner of Metro Pacific Investments Corp. in AF Payments Inc., the private concessionaire for the new cards, as well as a part of the Light Rail Manila Corp. (LRMC), which has taken over the operations and maintenance of the LRT-1.

Actress Denise Laurel was crowned Grand Winner for Season 2 of the weekly celebrity competition, Your Face Sounds Familiar. She earned 27.51% of audience votes for her impersonation of Beyonce during the show's final performance episode on Sunday. She won P2 million, half of which will be donated to her chosen charity, Caritas Manila. Meanwhile, singer Michael Pangilinan, who impersonated Adam Levine of Maroon 5, came in second with 23.87%, while Sam Concepcion, who impersonated Justin Bieber, came in third.

Good news, Swifties! You can once again stream Taylor Swift—that is, if you’re subscribed to Apple Music. We’re not talking about her track songs, though. Apple Inc. won exclusive rights to release the concert video of Swift’s recent “1989 World Tour Live” on Apple Music. Swift, who recently celebrated her 26th birthday, announced via Twitter that the concert video will be broadcast on Beats 1, Apple's radio station, on December 20, 9 a.m. PST (that’s December 21, 1 a.m. Manila time).

4. Independence Day is back with a new sequel

20th Century Fox has released an action-packed trailer for the new sequel to the 1996 sci-fi blockbuster, Independence Day. Bill Pullman, Jeff Goldblum, and Vivica A. Fox all reprise their roles but there's one key character missing; Will Smith's heroic Col. Steven Hiller. Smith decided not to return to the new film, so producers simply killed him off but he is survived by his wife and son (played by Jessie Usher). The movie, which hits cinemas in June 2016, also stars Liam Hemsworth.

For the first time in history, women have been elected to municipal councils in Saudi Arabia after a ban on women taking part in elections was earlier lifted. At least four women were elected into office, which is seen as a landmark moment in the conservative kingdom. The decision was made by the late King Abdullah and is seen as a key part of his legacy. In announcing the reforms, he said women in Saudi Arabia "have demonstrated positions that expressed correct opinions and advice."

6. Poe says she won't give up, recalls lessons from FPJ on his death anniversary

A special audit by Commission on Audit (COA) revealed that not only was the P2.28-billion Makati City Parking Building II project allegedly overpriced and its bidding manipulated, there were also more anomalous practices involved. COA’s report showed that statements of receipts and expenditures were “bloated” misinterpretations of infrastructure projects amounting to P14 million, where the funding for the building is believed to have come from. All five phases of the construction from 2007 to 2011 were allegedly not covered by the city’s annual procurement plan (APP). The construction of the building reportedly started when Vice President Jejomar Binay was still mayor of Makati City and was continued throughout the administration of his son, former Mayor Junjun Binay.

Imagine a nationwide smoking and liquor ban—that’s one of Davao City Mayor Rodrigo Duterte's plans should he become president. In Davao, smoking is prohibited in government vehicles, accommodation and entertainment establishments, partially enclosed public spaces, public buildings, and public outdoor spaces. Smoking in concerts, rallies, and other public gatherings are also a no-no. If alcohol is your fix, it’s good to note that the Mayor seeks to implement a nationwide liquor ban and the closure of establishments offering alcoholic beverages by 3 a.m. Duterte said that he knows he will face strong retaliation because of this and lose more votes, but he said he will take a stand for people who might get cancer because of these vices. However, he cited that there will be designated smoking areas because he knows nicotine is addictive, and people would “need to get their fix.”

9. 10 Apps You Need to Try With Your Friends

Plenty has been said about technology ruining real human interaction. But that doesn’t always hold true. There are apps out there invented for an ultimate bonding experience with your friends, techie-style. From cool video-making to karaoke, we’ve rounded up 10 that can guarantee hours of fun.

It's been a great year for the local film industry! We look back at some of the biggest and best films to hit our local theaters in 2015.