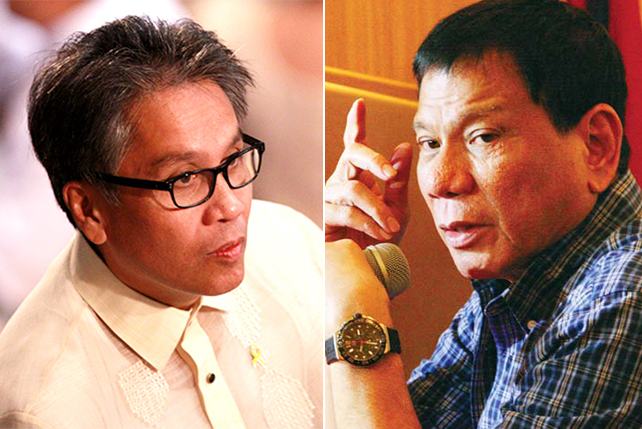 Who wants to see some dramatic face-slapping between Mr. Palengke and The Punisher? 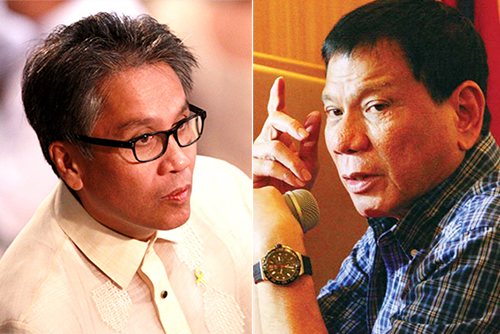 (SPOT.ph) First it was Liberal Party (LP) standard bearer Mar Roxas vs. presidential aspirant Sen. Grace Poe at Meet Your Candidates forum, now it’s Roxas vs. Davao City Mayor Rodrigo Duterte. All the passive-aggression is gone. They were throwing verbal bombs at each other during the weekend, and just today, December 14, Roxas challenged the Mayor to a slap bet. Maybe he’s just living up to being Mr. Palengke who, he said, never went anywhere.

How did the "Sampal Wars" start, you ask?

It all started on December 11, with Roxas’ remark  that a peaceful Davao City is a “myth.” He cited data from the Philippine National Police saying that over 18,000 crime incidents were recorded in Davao City in 2014. “So myth, kathang isip, imagination lang 'yong payapa ang Davao City. Hindi ko sila dina-down, sinasabi ko lang kung ano ang istatistika,” he said during a presidential forum at the Ateneo De Manila University.

The next day, December 12, Duterte said Roxas can’t handle stress. “Mar gave the victims (of Yolanda) uncooked rice. Why will you give them rice when they don’t have pot and water to cook them?” he said during a thanksgiving dinner in Taguig City. The Mayor also related how poorly Roxas handled the devastation of Leyte caused by the super typhoon. So, what if they cross paths? “…’Pag magkita kami sa isang kanto dito sa kampanya, sampalin ko ’yang [expletive] ’yan,” Duterte said.

In their defense, the Davao City Police Office (DCPO) also responded to Roxas’ statement, saying “that the Officers and men of Davao’s finest is doing its best to really curb-out criminality in the city.”

The word war continued on Duterte's Sunday television program, Gikan sa masa, para sa masa. The tough-talking Mayor on December 13 questioned Roxas' credentials as a Wharton graduate. “He said that the peace and order in Davao City is a myth. I’d like to ask the presidentiable, you claim that you have graduated from the Wharton School of Economics, that is a myth...You did not graduate from the Wharton School of Economics, Mr. Roxas,” he said.

Cut to today, December 14: Roxas has threatened to slap Duterte in retaliation...over whether Roxas is in fact an alumnus of the Wharton School of the University of Pennsylvania, among other things. Sandra Aguinaldo quoted what Roxas had to say:

Photos from PhilStar.com and mb.com.ph