This video of The Force Awakens cast singing a cappella is too cute + more things you might have missed today
Loading
Already a member? Log in
No account yet? Create Account
Spot.ph is your one-stop urban lifestyle guide to the best of Manila. 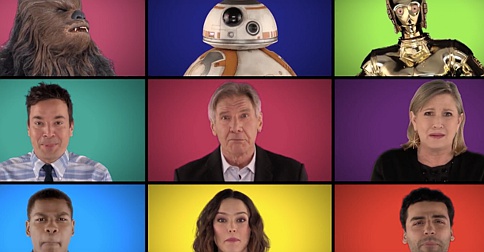 1. This video of The Force Awakens cast singing a cappella is the cutest thing you'll watch today

Whether you're having a bad day or you just really love Star Wars, this video of the cast with Jimmy Fallon will be right up your alley. The Tonight Show host gathered everyone (yes, even Harrison Ford and the droids) to perform a fun a cappella medley of the main theme and the Imperial March.

2. Gerald Anderson is open to working with exes Kim Chiu and Maja Salvador

Although they were once at the center of a highly publicized love triangle, it looks like things are okay between Gerald Anderson and his two exes, Kim Chiu and Maja Salvador. In an interview with PEP.ph, he said that he was on "good terms" with the two of them and that he was willing to work in any future projects with them. The actor also admitted that he is currently single.

3. A Star Wars game lets you use your phone as a lightsaber

No, it won't actually turn your phone into a lightsaber, but this is probably the closest you can get. Disney, Google, Lucasfilm, and George Lucas’ special-effects company Industrial Light & Magic have just launched a new website called Lightsaber Escape. Once you visit the site via desktop, you can calibrate your smartphone and wield it like a lightsaber to ward off Stormtroopers on your screen.

4. Would you try sriracha yogurt?

A yogurt company called Chobani has just unveiled a new series of novelty flavors that include sriracha-mango and chipotle-pineapple. The former is low-fat mango yogurt with “sriracha-coated rice crisps, mini sesame sticks, and roasted and salted cashew pieces,” while the latter is made up of low-fat pineapple yogurt with chipotle-flavored granola, “smoked almonds, and pumpkin seeds.” The yogurt joins a roster of bizarre, sriracha-flavored items that include candy canes and hummus.

5. Facebook partners with Uber for ride-hailing service via Messenger

Facebook is testing a new feature that allows users to book Uber rides through Messenger, without having to leave a conversation or downloading the ride-hailing app. Uber is the first partner for Facebook’s Transportation on Messenger app, which will be available in select locations in the U.S. starting December 16. Fingers crossed it will make its way to our shores soon!

6. Spotify Party wants to be the DJ for all your get-togethers

Hiring a DJ for your party is expensive, but Spotify may have the solution to that. With its new feature, Spotify Party, both free and premium users can have access to curated playlists that have adjustable features. It also collaborated with Diplo to create an exclusive 120-song playlist. Unlike your normal party playlist, Spotify Party features smooth transitions from song to song, and comes with an adjustable mood slider that allows users to tailor fit the music to suit the mood of the party—pretty much like how an actual DJ would do it. The curated playlists are made by Spotify, but users can add, rearrange, and remove songs from them. The new development was released worldwide on December 16.

Davao City Mayor Rodrigo Duterte is officially a presidential candidate. In a six-to-one vote, the Commission on Elections (COMELEC) en banc accepted on December 17 Duterte’s Certificate of Candidacy (COC) as a substitute candidate for Partido Demokratiko Pilipino-Lakas ng Bayan’s (PDP-Laban) former standard-bearer Martin Diño. The poll body assured the public that its administrative decision is without prejudice, and that the Mayor was able to comply with the basic requirements for substitution.

Nothing makes a Pinoy celebration grander than a whole roasted pig as the centerpiece. Christmas is just around the corner, and we’re quite sure everyone will have a “cheat week” for a taste of that lechon. Who can resist that juicy meat and crispy balat? Here are the best lechon offerings in Manila for the ultimate pig-out.

Most of us don't know the English words for certain things, let alone their exact Filipino translation. If your Filipino vocabulary is pretty limited, brush up on these 20 words that you may have forgotten...or have never even heard before.