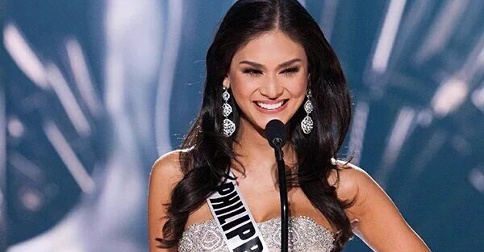 In a podcast by celebrity gossip blogger and Miss Universe judge Perez Hilton, he confirmed that Pia Wurtzbach's win in the pageant was "fair and square" and that "every single judge in the panel" voted for her to win the crown. He was also vocal about his opinion on Miss Colombia, Ariadna Gutierrez, saying she didn't deserve to win the title, although she was initially his frontrunner. He also spoke about what he thought was different between the two contestants. "Miss Philippines came to win, and Miss Colombia came to lose. Colombia came there as if she had already won...but I think that she truly believes that she was going to win, whereas Miss Philippines came with something to prove."

He also claimed that Gutierrez came across as "bitchy and arrogant" during the Q&A portion, saying that she was "being straight-up diva rude" to her translator.

2. Bridget Jones is back with a new movie

She's back and she's on the cover of Entertainment Weekly! Renee Zellwegger is reprising her famous role in the upcoming film, Bridget Jones' Baby, which takes place 10 years after the events of 2004's The Edge of Reason. The plot will revolve around trying to figure out whether long-time beau Mark Darcy (Colin Firth) or billionaire Mark Qwant (Patrick Dempsey) is the father of her child. The movie his theaters September 2016.

Fans of KC Concepcion were quick to speculate that she was leaving showbiz after noticing that she has been spending the past few months abroad. In an interview with ABS-CBN, she vehemently denied the rumors, saying, "Of course not. I have offers. I think that I've been honest naman in saying that I have taken a step back just because I think this year was important for me na parang iisipin ko muna kung sino ako." She also admitted that she has received movie offers but she didn't want to "do something for the sake lang na may lumabas."

4. Tom Hardy gets called out by furious interviewer

Uh-oh, someone's not too happy with Tom Hardy's behavior off-camera. In a series of tweets from reporter Drew McWeeny of Hitfix, he furiously recounted his experience with the actor, whom he was scheduled to have an interview with for The Revenant. He claimed that Hardy made him wait for three hours for a five-minute chat during a press junket, only to end up pulling out at the last minute. "I've seen Tom Hardy make publicists cry. He chose to take a nap during my scheduled time in Toronto. Today's Revenant junket was a joke," he partly wrote. "Thanks for making my job impossible because you're such a delicate, f*cking flower." He also said that this was the second time Hardy pulled the same stunt on him.

5. This company will send a hot guy to wipe away your tears of stress from your job

You can always count on Japan to come up with the most...uh, interesting services. A company called Ikemeso Danshi offers a roster of handsome young men to visit workplaces and wipe away tears of stress from female employees. The service, which offers six male options, costs about U.S. $60.

According to a report by Variety, Harrison Ford earned about U.S. $10 to U.S. $20 million to reprise his iconic role as Han Solo, which still doesn't include his box-office earnings. Meanwhile, Mark Hamill and Carrie Fisher earned salaries in the "low seven-figure range," while newcomers John Boyega and Daisy Ridley were paid in the "low six-figure range." Adam Driver and Oscar Isaac, who both had fixed quotes from previous TV and movie work, were paid around the mid-to-high six-figure range.

As of Monday, international weather agencies report that the country can expect generally clear skies throughout Christmas, particularly in Metro Manila. Both the U.S. Joint Typhoon Warning Center (JTWC) and the Japan Meteorological Agency (JMA) see no potential cyclone formations in the Pacific Ocean that could develop into a storm.

After months of trailing behind in surveys, Vice President Jejomar Binay has regained his lead in a poll of preferred presidential candidates. The poll, conducted from December 4 to 11, showed Binay earning 33% overall, followed by Rodrigo Duterte at 23%, and Sen. Grace Poe at 21%. Binay earned the top spot in Metro Manila with 30%, and the rest of Luzon and Visayas with 34% for both. He was edged out by Duterte in Mindanao, with the latter earning 43%.

9. 10 Sparkly Things to Wear This Christmas

The festive holiday season is the perfect excuse to don your flashiest outfit! From cute accessories to must-have shoes, we round up 10 sparkly things that can add that extra glitter to your Christmas party OOTD.

This year has been vibrant for the Philippine creative scene, whether it's through worldwide recognition or massive milestones. Here are 25 events that prove the country is overflowing with culture and ingenuity.