Even straight men are fighting over Pia Wurtzbach's Miss Universe win
Loading
Already a member? Log in
No account yet? Create Account
Spot.ph is your one-stop urban lifestyle guide to the best of Manila. 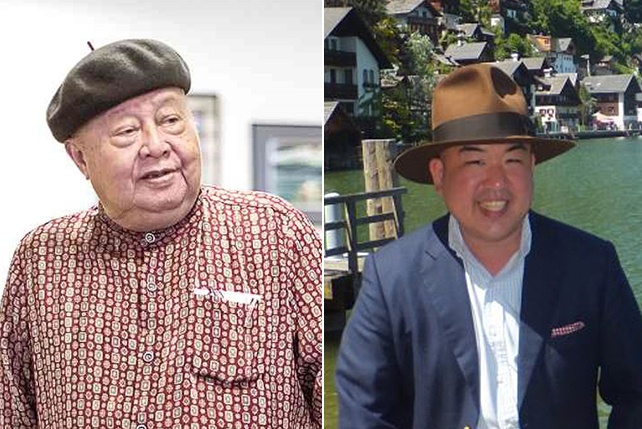 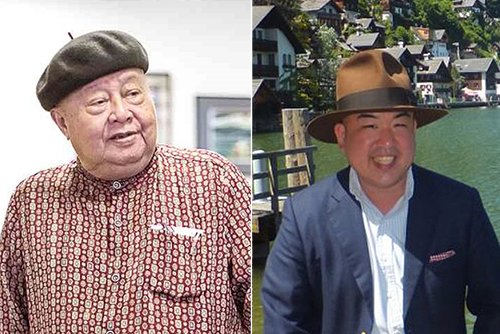 (SPOT.ph) It looks like the buzz about Miss Universe 2015 isn't going away any time soon. Host Steve Harvey's honest—but no less terrible—mistake in the announcement of winners made this year the most controversial coronation ever. Supporters of Miss Colombia and Miss Philippines had biting words about each woman. Even the contestants had opposing views, but at the end of the day, the judges had made a unanimous decision, and Miss Philippines Pia Alonzo Wurtzbach is the winner.

But if you think only the women and bekis are passionately catfighting on the Internet, news flash: Men have their own pageant battles, too.

Pia’s win has reignited the tension between columnists Oscar Franklin Tan of the Philippine Daily Inquirer and National Artist F. Sionil Jose, and it's somehow ended up in something of a dim sum-eating challenge. We'll take you through how it all started.

In June, F. Sionil Jose stated in his Philippine Star column (which was later updated) that Filipinos of Chinese descent should proclaim their loyalty to the Philippines. In response, Tan cried foul in his PDI column and called Jose's words "racist slurs." Clinton Palanca also wrote an open letter to Jose, published on SPOT.ph, saying, “Shame on us as a nation if we asked of each other to give up their cultural identity, whether it be Kankanay or Ilonggo or Chinese, in order to be more Filipino.”

Two weeks after, in a piece entitled “The Rizal Monument, the Supreme Court and patriotism,” Jose said: “After that last article on China, I realize that many of our ethnic Chinese love China as much as they hate me...What I ask of our ethnic Chinese who are Filipino citizens is simplicity itself: In a war with China, will you be on our side?”

This week, Tan posted a satirical meme on Facebook implying that Jose was not happy with Pia Wurtzbach. 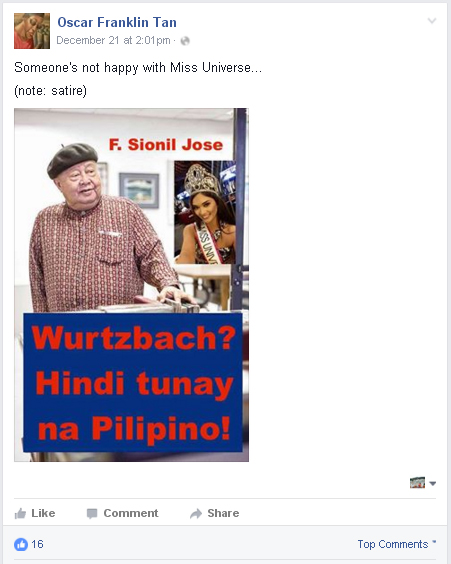 Jose quickly picked up and posted a status update on his Facebook page. He said that Tan was still hurting from their past issue because he thinks Jose should ask Pia, being half-German, to reside in Germany instead. He said this is very far from his sentiments as Pia united the Filipino people, which is totally in contrary, according to him, to what China is doing. 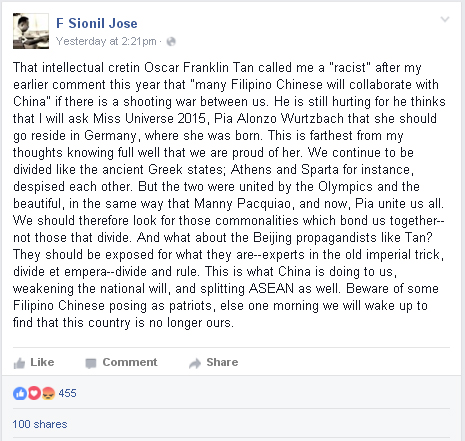 Tan made the screenshot of Jose's status his cover photo and concluded that for Jose, German-Filipinos are true Filipinos, while Chinese-Filipinos are Beijing propagandists. 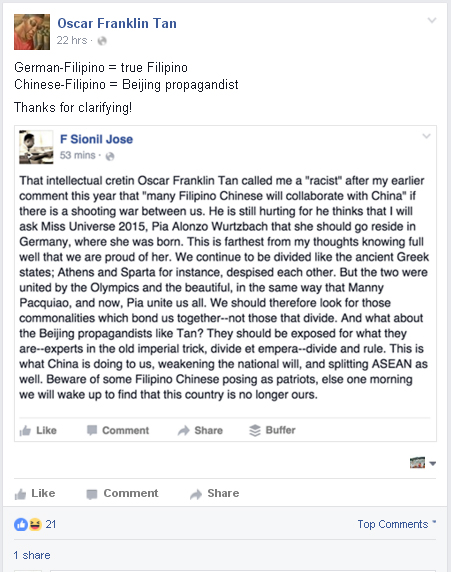 He posted this again on his other Facebook page, adding, "F. Sionil Jose said if 1,000 people like this cover photo, he will eat dim sum." 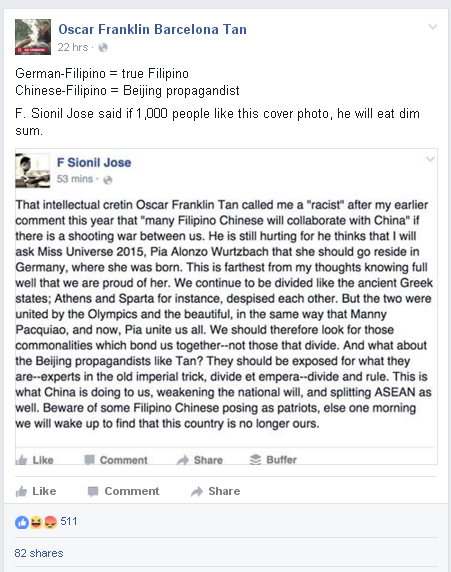 We're not sure if the dim sum challenge is really a thing. As of writing, the cover photo has over 500 likes. But why wait for 1,000 likes? Just have dim sum already! We have some recommendations: