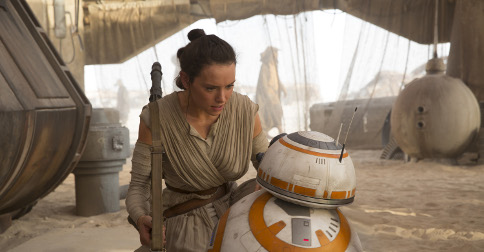 If you were among the folks who missed out on seeing the latest Star Wars installment thanks to the MMFF's two-week stay, don't fret! The film is returning to regular cinemas starting January 8 once the MMFF wraps up. From December 25 to January 7, it was only screened in IMAX theaters.

Bad news, Heneral Luna fans. The historical biopic starring John Arcilla failed to make the shortlist for the Best Foreign Film category of this year's Academy Awards. Of the total 81 films, only nine foreign films made the cut, including Mustang from France, Theeb from Jordan, and Embrace of the Serpent from Colombia. The shortlist will then be trimmed down to five and the final list of nominees for the awards show will be announced on January 14.

The Harry Potter actress expressed her support for Noma Dumezweni, who will play Hermione in the play Harry Potter and the Cursed Child. Emma Watson took to Twitter to express her excitement, saying that she can’t wait to see the Laurence Olivier Award-winning actress on stage. Although some fans were hesitant and cried foul because the new Hermione will be played by a black actress, most of them were rather supportive. Earlier, J.K. Rowling gave the casting choice a thumbs-up.

4. Star Wars: The Force Awakens is just few days from breaking the record held by Avatar

Star Wars: The Force Awakens earned U.S. $88.3 million this weekend (breaking Avatar’s previous third-weekend record of U.S. $68 million), bringing it to a total of U.S. $740 million. Analysts expect Star Wars to surpass Avatar's record domestic box office total of U.S. $760.5 million in the next few days. It's worth noting that it took The Force Awakens only 17 days to reach the mark, while Avatar took 47, and Titanic, 86.

Here's a dose of good vibes to start your week. Texan businessman Ron Sturgeon helped families from Colleyville, Texas by renting out two vacant mansions to four families for just U.S. $1 a month. He is also lending the families two cars, and has offered his place for as long as three months. "I was just astounded at all the devastation and how all the homes were just completely destroyed," he explained. "I was just thinking about having those two big homes. We’ve got them listed for sale, and it doesn’t make sense for them to be vacant when somebody could be using them that obviously would have a great need."

Saudi Arabia cut its diplomatic ties with Iran on Sunday after the recent execution of a Shiite clerk in Iran, which then led to attacks on the Saudi Arabian embassy and consulate. Saudi Foreign Minister Adel al-Jubeir gave Iranian personnel 48 hours to leave the country, while Saudi personnel in Iran have been called to return home. The Saudi government executed Saudi Sheikh Nimr al-Nimr along with 46 others on Saturday. Much of the conflict between the two nations stems from religion: majority of Iran is Shiite Muslim, while Saudi Arabia is mostly Sunni.

7. Abaya says MRT-3 capacity to go up by 67% when 48 new coaches become operational

Transportation Sec. Jun Abaya promised that the capacity of the Metro Rail Transit (MRT-3) will expand by as much 67% once all 48 new light rail vehicles (LRVs) ordered by the Philippine government from China become operational. However, Abaya said that the first three train coaches which arrived in the Philippines in December from Dalian Locomotive, the company that won the bidding to supply new train coaches, will have to undergo test runs some time in January or February. These test runs will be announced to the public, assured Abaya.

Land Transportation Franchising and Regulatory Board (LTFRB) Executive Director Roberto Cabrera III will take over as the new chief of the Land Transportation Office (LTO), following the resignation of Alfonso Tan Jr. On January 3, Cabrera vowed to resolve and fast-track the agency's backlog. He said that the agency could start releasing new plates and licenses by May, but also admitted that he cannot confirm when the backlogs will be fully resolved.

Building a beach body starts in January, because you need all that time to lose the holiday bulge come bikini season in March. If you want to explore a new fitness routine—whatever your motivations and goals are, here are 10 fresh classes to try this year.

10. 10 Apps That Will Turn Your Life Into a Video Game

If you've always wanted to live in a video game, we found a way to do that...sort of. Here are 10 apps that transform even the most mundane tasks like drinking water or hitting the gym into a fun, virtual game.