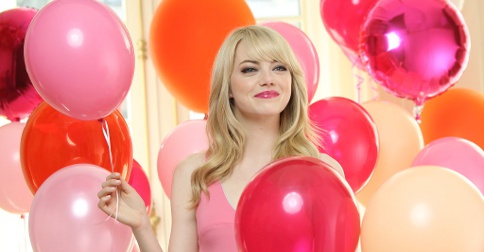 It's going to be Emma Stone as you've never seen her. Reports say the actress is currently in talks to play 101 Dalmatians baddie, Cruella De Vil in an upcoming live-action film from Disney. Although the release date and casting have yet to be officially announced, the plot will reportedly be an origin story for the character.

It's a girl for John Prats and Isabel Oli! The new parents made the announcement via a YouTube video where they were filmed revealing the gender to their family. According to ABS-CBN, the couple decided to name their daughter Feather.

3. Miss Colombia might be doing three different endorsements where she gets her “crown”

So Pia was right: More opportunities will come for Miss Colombia Ariadna Gutierrez Arevalo after all. We’re not talking about that infamous offer to do porn—the woman isn’t taking that. But it looks like Arevalo and her manager, Luis Balaguer, are in talks with Burger King for a commercial “where everyone keeps their crown.” A Corona (which means “crown” is Spanish) commercial with Arevalo is also a possibility. It doesn’t stop there. We heard Miss Colombia’s dream is to become a Victoria’s Secret Angel, and there are rumors that say Balaguer was in touch with the company recently. Maybe Miss Colombia will get to wear a crown along with wings on a runway next year?

The Tatums continue to prove that they’re one heck of a hot couple. Jenna Dewan Tatum recreates her husband, Channing Tatum’s Magic Mike performance to Ginuwine's seductive 1996 hit “Pony” on the season premiere of Lip Sync Battle. The 35-year-old dancer and Supergirl actress worked the stage and gave Channing a steamy lap dance. When host LL Cool J asks if this is what normal life is like for the couple, Jenna answers, “Totally. We lap-dance every night.”

5. Virtual reality gaming is finally here...that is, if you can afford it

It was back in 2012 when Oculus Rift first sparked interest in the possibility of virtual-reality gaming after they launched a successful Kickstarter campaign. Over two years later, they announced pre-orders for models at a whopping U.S. $600 per set. Still, that didn't stop excited gamers as the first batch has already sold out.

6. Adele's gym photo is actually all of us

How's your New Year's resolution going? Are you still on the road to fitness? Well, so is Adele and she doesn't look very happy about it...kind of like all of us, actually. She posted a gym photo on her Twitter account and well, her face says it all. On November 2015, Adele told Rolling Stone that she mostly moans about the gym, saying, "I’m not, like, skipping to the f***ing gym. I don’t enjoy it."

Malacañang has replaced Immigration Commissioner Siegfred Mison barely two weeks after he was put under investigation for the escape of a South Korean fugitive in 2015. P-Noy appointed Ronaldo Geron, a Malacañang official, to replace Mison. Geron took his oath as the new immigration chief on January 6.

Ah, ramen—that flavorful and rich warm bowl of soup and noodles we love. Japanese chains and homegrown establishments that offer this dish have long started popping left and right in the Metro and we’re sure you already have your personal favorites. Here are 10 of the best places to get your ramen fix in Manila.

You know a love team tandem has legit chemistry when legions of fans get emotionally invested and they begin to root for a real relationship behind the cameras. Here are 10 TV and movie pairings we'd love to see go from reel to real.