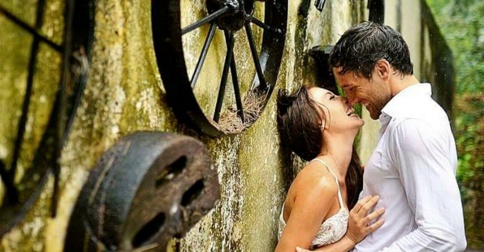 Over the holidays, Solenn Heussaff made headlines for reportedly tying the knot with her boyfriend, Nico Bolzico, in Argentina. However, she told reporters that the photos (including a Snapchat post from Isabelle Daza captioned "Mr. and Mrs. Bolzico") were a "celebration lang for the union. Kasi 'yon, wala pang celebration since the engagement...single ako technically," she said. "When the big day happens, I promise, GMA [Network, her home station] will be the first to have all the videos." She confirmed plans to walk down the aisle this year in France.

2. James Reid striptease in On the Wings of Love irks several police officers

ABS-CBN’s primetime series On the Wings of Love drew flak from police officers after its January 11 episode featured Clark (James Reid) stripping while dressed in a police uniform during the bridal shower of his wife, Leah (Nadine Lustre). Philippine National Police (PNP) officers, as well as the Police Community Relations Group and other police officers took to social media to express their displeasure about the said scene. Kane Errol Choa, Head of Corporate Communications of ABS-CBN, apologized to the PNP in a statement saying they have called the attention of OTWOL’s production team, promising "it will not happen again."

3. Beauty and the Bestie breaks A Second Chance's PH record

In an interview with PEP.ph on Wednesday, director Wenn Deramas revealed that Beauty and the Bestie has broken A Second Chance's box-office record in the Philippines. The former reportedly earned P481 million as of Tuesday (January 12), narrowly eclipsing the domestic earnings of the latter (P480 million). The number still hasn't accounted for international box-office earnings, with A Second Chance setting a record of P556 million worldwide.

4. The Friends cast is reuniting to honor a legendary TV director on NBC

The Friends cast is coming back to NBC! But before you get too excited, you should take note that they won't be playing their old characters. Jennifer Aniston, Courteney Cox, Lisa Kudrow, Matt LeBlanc, Matthew Perry, and David Schwimmer will be reuniting in February for a special tribute to legendary TV director James Burrows, along with cast members from several other classic NBC shows like Taxi, Cheers, and Will & Grace. The special airs on February 21.

We're not kidding! Caromont Farm in Albemarle, Virginia raises goats for cheese-making, and they're expecting about 90 newborn goats this February. The farm recently announced that they are in need of volunteers to snuggle the baby goats, as they need warmth, attention, and round-the-clock bottle feeding. Naturally, available timeslots are already full (who wouldn't want to cuddle with a cute baby goat?!!), but they encourage those interested to keep checking their website in case new slots open up.

6. This church in Taiwan is shaped like a shoe to draw more female churchgoers

An enormous Cinderella-like glass slipper church in Ocean View Park in Budai, Taiwan has attracted the attention of the Internet. The 55-foot church, made entirely out of blue-tinted glass, was built to draw more female worshippers. The church was built in just two months, and will be open to the public before the Lunar New Year (February 8).

According to the Department of Foreign Affairs (DFA), the Philippines officially filed a diplomatic protest against China’s test flights to Kagitingan Reef (on the Philippine side of the Spratly archipelago), saying Beijing’s actions are "provocative," and a violation of an informal code of conduct for claimants to the territory in the disputed West Philippine Sea. China rejected the protest, citing its "undisputed sovereignty" over almost the entire West Philippine Sea. Last week, China landed three flights on the artificial island it had built on Kagitingan Reef, drawing criticism from the U.S. and angering Vietnam (which is also asserting its claim on the reef).

The immature reaction to disagreement is to throw a tantrum or resort to name-calling—and then some. Sometimes, it feels as though Philippine politics is full of children, and here are 10 examples of public officials who've acted just like teenagers.

Though our appetites may often veer towards pizzas loaded with toppings, we will always take comfort in a humble cheese pizza. From the simple one-cheese to the more complex four-cheese, we found the 10 pizzas that will satisfy your cheesy cravings.