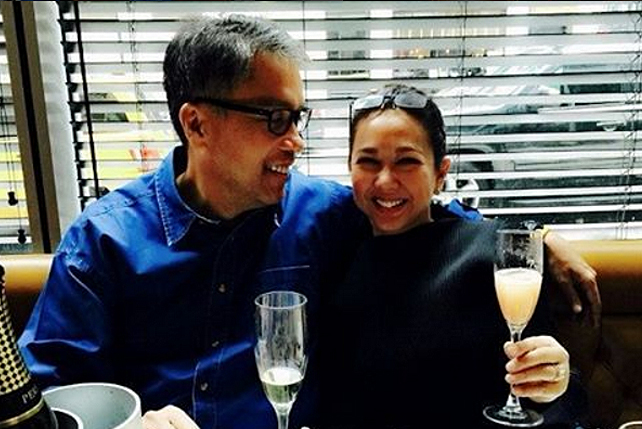 In today's episode of What Now, Korina?

(SPOT.ph) TV broadcaster Korina Sanchez takes pride in being, uhm, a regular person. And by "regular," we mean lining up at the airport. On January 20, she said her husband, Liberal Party standard-bearer Mar Roxas, is just like us. Roxas wears tattered shirts at home and plastic watches outside, Sanchez told the farmers gathered in Davao del Sur to receive assistance from the national government. She also compared the presidency to driving a school bus, but more on that later.

“I know my husband very well,” Sanchez said. “Mar is very simple and he likes to wear tattered shirts in the house all the time. The expensive clothes I bought for him remain unworn.” Roxas doesn’t like wearing expensive accessories in public either, she added. “Even the expensive watch I bought for him has not been used because he prefers to use the plastic ones.”

So how did the broadcaster compare choosing the next Philippine president to employing a school bus driver? “There are four drivers applying for the job. I won’t name them, but one is a thief,” she said. According to Sanchez, the thief is not someone the farmers should entrust their children with. The other wears white shirts and is kind, but is still learning how to drive; if employed, she might bring the children to Iloilo instead of Davao del Sur, she explained. “The other one is hot-tempered and always angry. If your children are importunate, he pokes a gun at them. The more unrelenting ones could get slapped, so what will happen to your children?” Sanchez asked the farmers.

She said the fourth applicant, with his 25 years of experience in driving, is already an expert. “I wouldn’t name him because I know you know him already,” she said. Obviously referring to her husband, she then asked the farmers to support the LP standard-bearer and said he was the only candidate who could continue P-Noy’s reform program.

Sanchez accompanied Agriculture Sec. Proceso Alcala in distributing P54 million worth of farm implements and other assistance to farmers from different parts of Davao del Sur province. The Secretary was asked about the aptness of campaigning for Roxas at an event for a government-assisted program—even before the campaign season has officially started (it begins February 9).“There’s nothing wrong about it because [Roxas] is also being endorsed by the national government,” he answered. In his speech, Alcala pitched for Roxas, but said the main purpose of their visit was to distribute assistance from the government to help the farmers survive the effects of El Niño.