Nadine Lustre says there's a chance for romance IRL with James Reid + more things you might have missed today
Loading
Already a member? Log in
No account yet? Create Account
Spot.ph is your one-stop urban lifestyle guide to the best of Manila. 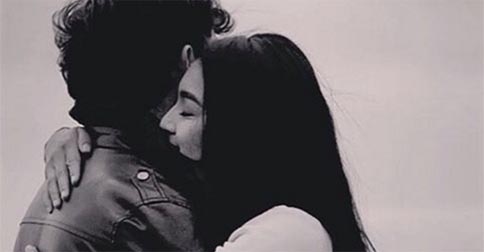 Miley and Liam are engaged again, a 24-karat gold Kit Kat, and more.

We know you ship JaDine. Although both claim to be “best friends,” Nadine Lustre told YES! that might actually be a possibility IRL. The 21-year-old actress admitted that she has an “unconditional love” for her leading man James Reid. Nadine even shared that she always takes care of James because no one looks after him now. Because they’re always together and they have an undeniably electric chemistry onscreen, it’s easy to assume that the tandem has already developed romantic feelings. “Hindi naman zero ang chance. Kami, talagang hindi po muna namin iniisip…May chance naman po. Huwag lang muna talaga,” Nadine said.

Alden Richards and Maine Mendoza recently paid a visit to Laguna to formally open the first AlDub library at Lumban Central Elementary School. The school was given books, new tables and chairs, and new computer sets for students. This is the first of a series of libraries that will be opened across the country using funds earned from their massive Philippine Arena concert in October 2015. (They earned P14 million in ticket sales.)

Multiple reports say that exes Miley Cyrus and Liam Hemsworth aren't just back together...they're engaged again! According to US magazine, the pair have moved in together (again), right before Cyrus posted a series of Instagram photos with what looked like an engagement ring. They were first engaged in 2012 but went their separate ways a year later. She was eventually linked to model Stella Maxwell and Patrick Schwarzenegger, while Hemsworth briefly dated one of his co-stars, Maika Monroe. The pair has yet to officially confirm the news.

4. Will Smith confirms Oscars no-show over lack of diversity

Actor Will Smith said he will not attend the Oscars ceremony on February 28, joining his wife Jada Pinkett Smith and director Spike Lee in protesting the absence of minorities among the acting nominees. For a second year in a row, the Academy of Motion Picture Arts and Sciences nominated only white actors for the 20 slots, causing an outcry. Smith is a two-time Oscar nominee for his roles in Ali and The Pursuit of Happyness. His role in Concussion was overlooked this year, and the actor has said that America's diversity is one of its strengths, and should be reflected in film.

DC's Legends of Tomorrow, a sister-series to the highly popular The Flash and Arrow, is making its Philippine premiere on the same day as the U.S.! The show revolves around a group of colorful superheroes who are recruited by a time-travelling rogue (Doctor Who's Arthur Darvill) to save the future. The show stars familiar names like Brandon Routh (of Superman fame), Victor Garber (Alias), Wentworth Miller, and Dominic Purcell (both from Prison Break). Legends of Tomorrow premieres tonight, January 22,  on the Warner TV channel at 9 p.m.

Yup, you read that headline right and just so we're clear, there are no gold flakes in the chocolate bar. Instead, the Kit Kat bar contains "Phoenix Oolong" tea leaves, lychee, and rose petals, and will be wrapped in edible, 24-karat gold leaf. The chocolate was created to celebrate Chinese New Year and unfortunately, is only available at the Kit Kat Studio in Melbourne, Australia for a very limited time. (Only 88 of these were made!)

After Senate President Franklin Drilon said the Commission on Elections (COMELEC) is rushing the printing of the ballots, Spokesman James Jimenez said the poll body is just following its timeline. He explained that the national elections can’t proceed if they are not ready, that’s why they are printing the ballots on February 1—neither early nor late—just as scheduled. Jimenez also denied that the COMELEC is biased in favor of Sen. Grace Poe, whose disqualification case is pending before the Supreme Court (SC), as her name is likely to be included in the ballots if there is no ruling by February 1. However, Drilon urged COMELEC Chairman Juan Andres Bautista to postpone the printing until the High Court has decided with finality on Poe's disqualification cases.

9. 10 Filipino Dishes That Will Always Be Favorites

No matter what new and exotic cuisine we try, we will always go back to good ol' Pinoy food. From comforting champorado to lipsmacking liempo, we round up 10 Filipino favorites and where to find them in Manila.

All those makeup tutorials make it look so easy, but we know how it is in the real world. You can’t go buying a complete bag of cosmetics if you don’t know what to do with them, so we’re here to help you get started.