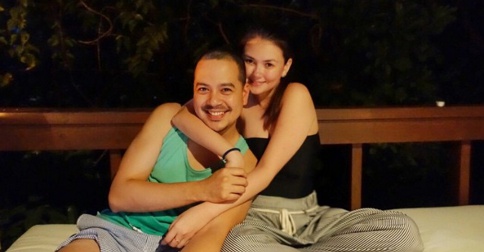 Pia Wurtzbach on U.S. military presence in the PH, new music from David Bowie, and more.

Talent manager Ogie Diaz revealed on his DZMM program over the weekend that John Lloyd Cruz and Angelica Panganiban have split up, reportedly on January 16. According to his sources, the two "remain friends" and that JLC's perennial love-team partner, Bea Alonzo, was not the cause of the breakup. "[A common friend] told me na hindi sila ni Bea at hindi niligawan ni John Lloyd si Bea," he said. "Sabi pa raw ni John Lloyd, 'hindi naging kami. Kami ni Bea ay magkaibigan lang.'" Both John Lloyd and Angelica have yet to make an official statement.

Miss Universe 2011 third runner-up Shamcey Supsup welcomed her first child on Sunday, January 24. The former beauty queen took to her Instagram account to share a photo of her baby girl named Nyke, where she also said that she initially wanted to go with normal delivery but had to undergo a cesarean section "because of unforeseen consequences."

According to reports, the late David Bowie scheduled the posthumous release of music from several eras of his long and colorful career. According to a person close to the musician, there is a "a long list of unscheduled musical releases that Bowie planned before he died" that will likely be available by the end of 2017 at the latest.

4. Filipina wins title as most beautiful grandma in the world

Babylyn Decena-Newfield, a 48-year-old mother of four—and also grandmother of four—won the Philippines’ first title at the annual Mrs. Grandma Universe 2016 held in Bulgaria on January 21. Aside from besting 50 other contestants, she also got the award for best national costume. The pageant first-timer said that joining the contest was "just for fun."

5. Artist protests "bullshit" by sitting naked on a public toilet for days

Yup, you read that headline right. Artist and comedian Lisa Levy is taking a stand against "ego" and "bullshit" by sitting naked on a toilet for two days straight and staring at anyone who crosses her path. "Ego and pretense has seriously fucked with the quality of work being made in the art world," she wrote on the event's Facebook page. "I'm also tired of the bullshit trendy art dialogue about how the art world is driven by rich people who want shiny work and don't care about meaning as well." The event takes place at the Christopher Stout Gallery in New York from January 30 to 31.

Japan does it again—a levitating bonsai tree is now an actual thing. Air Bonsai is a new bonsai-style miniature plant that hovers and spins over a magnetic base, launched by a team based in the Kyushu region of Japan. Take note: These are real plants and will need regular watering and care, they're not just props. The cheapest option costs U.S. $200 (P9,950) for the basic Air Bonsai set. Despite the price, it looks like a lot of people want to own a floating plant because the Japanese team has already surpassed its funding goal as of writing.

7. Pia Wurtzbach stands by her opinion on U.S. military presence in the Philippines

Miss Universe 2015 Pia Wurtzbach drew controversy during the pageant night's Q&A portion when she said that she’s okay with U.S. military presence in the Philippines. On Wurtzbach’s homecoming on January 24, the beauty queen was given a chance to clarify her answer. She explained that being asked on-the-spot onstage is totally different, but immediately added, "Nevertheless, I stand by my answer and believe that there is no second best answer that I could have given. Military presence to me is an aid, or a helping hand—very different from military bases." She also said she is willing to discuss the matter with anyone who has a different opinion.

On January 25, P-Noy promised that there would be justice for the members of the Philippine National Police Special Action Force 44, exactly a year after the bloody Mamasapano encounter. During the commemorative ceremonies in Camp Crame, he admitted he was frustrated with the country’s dragging justice system but assured that the perpetrators will not go unpunished. “Ako man po ay naiinip sa pag-usad (of the case). Justice delayed is justice denied,” he said. In the same event, P-Noy awarded the SAF 44 with the highest honors for their extraordinary sense of duty for the country. He granted the Medalya ng Kagitingan (Medal of Valor) to Sr. Inspector Gednat Tabdi and PO2 Romeo Cempron. The rest of the SAF 44 were bestowed the Medalya ng Kabayanihan (Distinguished Conduct Medal).

If you're too intimidated by the gym (or maybe you're just too lazy, we won't judge), there are a few simple tricks that can keep the guilt at bay...even for just a bit. Whether it's tweaking your diet or joining a fun walking tour, there's an easy way to get your sweat on.

Art Fair Philippines 2016 featured artist Raffy Napay masterfully uses thread as his medium of choice in making visual art. Find out how he became the artist that he is—his roots, achievements, and more.