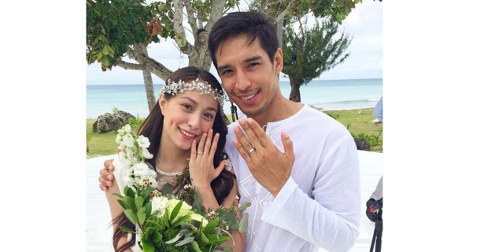 Cristine Reyes and Ali Khatibi are officially married! The newlyweds tied the knot in a civil ceremony in Balesin Island Club on the morning of January 27. In an earlier interview, the couple said they chose this date because it’s the day when they felt "overflowing love" for each other. According to Cristine's sister, Ara Mina, the wedding was an intimate ceremony among family and friends.

2. Kanye West will debut his new album at a live event in New York and will screen it in theaters worldwide

On February 11, rapper Kanye West recently tweeted that his seventh studio album, Swish, will be released in two weeks alongside the debut of his Yeezy Season 3 fashion line. Both will be introduced to fans at a Madison Square Garden event in New York City, and will be livestreamed at selected theaters worldwide.

Actress Lena Headey is best known for her role in HBO's Game of Thrones as Queen Cersei Lannister, who has a particularly vicious way with words. She channeled her inner Cersei in a recent appearance on Jimmy Kimmel Live, where she was asked to read actual lines from the reality show, The Bachelor. Needless to say, it's both hilarious and kind of intimidating.

If you've always wanted to visit New York's famous Guggenheim Museum but you haven't saved enough just yet, Google Street View will now let you explore its interiors from the comfort of your house. All you have to do is visit Google's special site and you can now stroll down its halls and view about 120 pieces of art, including two special exhibits from 2013 and 2015.

5. Uber plans to entertain its drunk passengers with a Bop It toy in the backseat

Remember Bop It? Yup, it's the famous children's toy from the '90s that instructs you to "bop," "twist," and "pull" knobs and buttons. Now, Uber has been conducting an experiment in Charlotte, North Carolina where drivers leave Bop It toys in the back seat to entertain drunken drivers. The move comes after a series of drunken passenger assaults on Uber drivers.

The Department of Science and Technology's Information and Communications Technology Office is set to launch its free Wi-Fi service to close to 1,500 municipalities across the country. The program aims to install hotspots with an average Internet speed of 256 kbps in public areas such as parks, government offices, and transport terminals. The initiative will be extended to Class I and II municipalities, alongside the originally targeted Class III to VI municipalities.

8. Duterte to alleged Davao drug agents: “I will kill you”

Davao City Mayor Rodrigo Duterte thinks law enforcers from Manila are sent to discredit him by conducting raids and staging drug laboratories in Davao. “Do not ever fabricate to destroy me. I will really go after you. I will kill you,” the Mayor warned. According to Duterte, the operatives behind the alleged conspiracy were possibly sent by his political rival, although he refused to reveal their identity. “If I see you carrying shabu—whether you are from the military, police or PDEA—to set us up, I’ll kill you,” he said.

There's more to Manila's movie scene than just regular theater screenings and the annual MMFF. From restored Filipino classics to thought-provoking foreign films, we found the 10 best places for film screenings in the Metro.

Podcasts have been around for as long as we can remember and yet, they're still as popular as ever. You don't even need an Apple device to listen in anymore! Whatever your interests, we found 10 podcasts for a lazy day at home or a long commute to work.