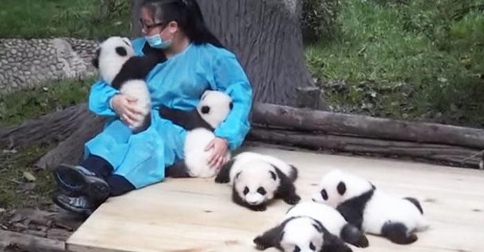 1. A job as a professional panda hugger actually exists

According to a report from ChinaDaily.com, Chengdu's Giant Panda Protection Research Center actually hires people to cuddle with pandas. (Yes, it's a full-time job!) Employees who get to take care of these adorable critters are paid about U.S. $32,000 a year or about P1.44 million. Sign us up!

In a recent press conference, Anne Curtis refused to divulge more details about the controversy surrounding a viral Snapchat post of her boyfriend, Erwan Heussaff, and her sister, Jasmine Curtis-Smith. "Just so you know, we are all okay. We are all good," she told reporters. Neither Erwan nor Jasmine have released statements on the issue.

3. Jiro Manio decides to give showbiz another try now that he's out of rehab

Former child actor Jiro Manio on January 25 was released from a six-month rehabilitation program from a wellness facility where he was confined through the help of actress Ai-Ai delas Alas. Manio said that after his second time at rehab, he is finally "healed." The 23-year-old actor said he will prepare to go back to showbiz, which is the first thing he and Ai-Ai talked about when he was released. "'Yong mga bagay na hindi ko na dapat balikan, iniwan ko na,” he said. “Nag-promise po ako kay Mama Ai na aayusin ko, hanggang sa makabangon ako, at suklian ko ang lahat ng mga tulong niya sa akin."

Leonardo DiCaprio visited the Vatican on January 28 for a private meeting with Pope Francis over their shared concern for the environment. DiCaprio offered His Holiness a book of works by the 15th Century Dutch painter Hieronymus Bosch, and showed him the reproduction of Bosch's Garden of Earthly Delights. The latter, he said, represented the Pope's environmental concerns. Meanwhile, Pope Francis gave the actor a copy of his encyclical Laudato Si (Praise Be), which denounced the use of fossil fuels and demanded greener energy resources.

5. The first trailer for DreamWorks’ Trolls is too adorbs

DreamWorks describes its upcoming animated musical film Trolls as the “most smart, funny, irreverent animated comedy of the year.” Its first trailer is finally here and you will see your childhood doll dance the Nae Nae! The cast includes Anna Kendrick and Justin Timberlake, with the latter producing and making music for the soundtrack. Trolls hits theaters in November.

A female Philippine hawk-eagle has died from a bullet wound sustained in Camalig, Albay. A resident saw the wounded animal and rushed the bird to a veterinary clinic, but it unfortunately died while being treated. According to the IUCN Global Species Programme, the number of hawk-eagles have dwindled to about 600 to 900, reportedly due to deforestation.

The Commission on Elections has announced that it has partnered with Facebook for the May 2016 national elections. This announcement was made just days after the poll body confirmed its team-up with Twitter. Global manager for Facebook's politics and government outreach team Katie Harbath said they will be helping the Commission on Elections (COMELEC) in crowdsourcing questions for the series of debates for the candidates that will be staged within the campaign period. Harbath also said there will be a "Voter Megaphone" option on Facebook for Filipino users 18 years old and above on the election day (May 9) so users can let other users know they have exercised their right to vote.

8. Poe guarantees to ease traffic “within a year” if she becomes president

On January 28, presidential aspirant Sen. Grace Poe vowed to ease the terrible traffic in the Philippines in one year—that is, if she becomes president. To do this, she said, "Just add the necessary number of trains. Start finishing the lines that are already supposed to be done, enforcing the rules, making sure that there's a proper drop-off for provincial buses outside of Metro Manila." Poe said that if the Philippines is to be a globally competitive country, there should be mass transport and rail systems outside Metro Manila. She also proposed building underground subway systems, and that there may be a need to hire foreign engineers to design them.

And just like that, the first month of 2016 is over! We bid goodbye to January with a roundup of the best things we ate this month, from an irresistible coconut crepe to a tasty shrimp BLT.

Crisp on the outside, moist and juicy on the inside—we searched the Metro for 10 karaage dishes that display this perfect balance of Japan's own version of fried chicken.