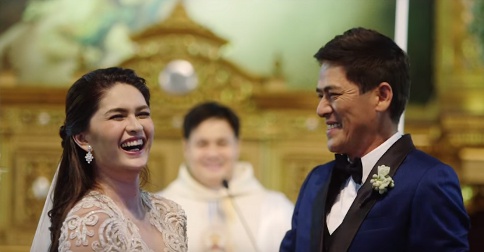 Ace lensman Jason Magbanua has unveiled the official video for Vic Sotto and Pauleen Luna's wedding on January 30. The video, set to local indie artist Reese Lansangan's music, featured highlights of the ceremony, including the preparations, the star-studded guest list (including AlDub and the Eat Bulaga gang), and the sweet vows. "Our story is not ideal. And a lot of people did not understand us, didn't understand the kind of love that we have," said Pauleen in the video. "You made me see that true love knows no age, no boundaries, beyond what the eyes can see, that true love is felt."

2. Pia Wurtzbach returns to NYC: "I will continue making all of you proud!”

After her week-long homecoming visit to the Philippines, Miss Universe 2015 Pia Wurtzbach returned to New York yesterday, January 31. During her brief stay in the country, the beauty queen was busy with various engagements, charity events, guest appearances, and her BFF Pauleen Luna’s wedding with Vic Sotto. Wurtzbach bid farewell to her Pinoy fans through an emotional Instagram post: “I'll be back soon, mga kababayan. Naiiyak ako that I have to leave so soon. Sobrang saya ko dito sa Pilipinas. But like I said, this is a responsibility and I have duties now. I will continue making all of you proud!”

3. Rupert Grint says it was "surreal" to kiss Emma Watson

In an interview with People magazine, Rupert Grint opened up about his famous on-screen kiss with Emma Watson in the last Harry Potter film. "I never look back at that scene," he admitted. "I’ve known Emma since she was literally nine years old and we had this very brother-sister relationship." He called the moment "surreal" and added, "It was such a huge moment and there was so much expectation. Quite a lot of pressure actually."

Los Angeles-based artist Andrew Tarusov has always been a fan of Disney and Tim Burton, so one day, he decided to put two of his favorite things together. He gave a bunch of Disney movies a rather gothic makeover, including The Lion King, The Little Mermaid, Pinocchio, and Bambi.

Starting February 1, the Bangko Sentral ng Pilipinas will release P100 bank notes with a stronger mauve or violet color after several complaints of its similarity to P1,000 bills. “The current 100-peso bank notes can still be used for daily transactions for payment of goods and services and will commingle with the new 100-peso bank notes with stronger mauve or violet color until supplies of the first version last,” the Bangko Sentral ng Pilipinas (BSP) said.

On January 31, the Metropolitan Manila Development Authority said that the number of commuters opting to take the Pasig River Ferry system instead of road-based modes of public transportation is increasing. If this continues, it could possibly help decongest EDSA. Metropolitan Manila Development Authority (MMDA) Pasig Ferry head Rod Tuason said the ferry system has an average of 500 passengers a day. “I think the public is choosing the ferry over the bus or other modes of transport since it only takes them 45 minutes to reach Manila from Pasig,” he said. He added that they have been working to add new boats to the existing 16 that are currently running along the Pasig River.

8. Irked Enrile dares P-Noy to debate on the Mamasapano massacre

Senate Minority Leader Juan Ponce Enrile has challenged P-Noy to a public debate on the Mamasapano massacre. The 91-year-old senator insisted that the President, not former SAF director Getulio Napeñas, is to blame for the death of the SAF 44. Enrile also had biting words for committee chair Sen. Grace Poe, whom he said simply made a conclusion in the committee report she submitted last year without any basis that P-Noy was ultimately responsible for the Mamasapano massacre. “What are the facts? My god, in criminal law you deal with facts not conclusions. If you don’t know that...I am sorry for her [Poe] and for this country,” Enrile said.

9. Spin City: A Guide to Indoor Cycling Studios in Manila

Spinning is one of the hottest workout trends today. And by hot, we mean insanely heart-pumping—in a fun and challenging way. Here are the best places to take the indoor cycling ride around Manila.

The Filipino komiks scene is getting bigger every year, with titles that go beyond Trese and Pugad Baboy. From superheroes to wordless comics, there's something for any reader...new or otherwise!