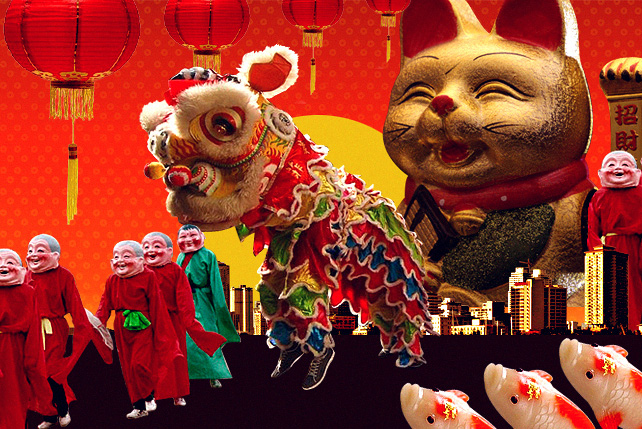 Chinese New Year Should Not Be a Holiday 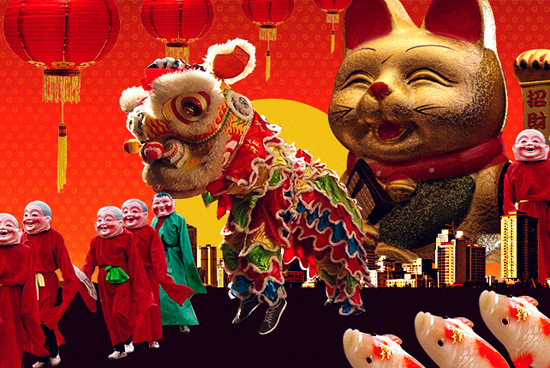 (SPOT.ph) At the Power Plant Mall in Rockwell, they keep the Christmas décor up until the week before Valentine’s Day or Chinese New Year, whichever comes first. Then all the tinsel and lights come down and are replaced by either hanging lanterns or hearts, depending on the occasion. But because the two holidays are so close together, the decorators usually opt for quick-change ornamentations: after one holiday is done, the lanterns miraculously transform into hearts, or vice-versa.

One is a former religious holiday turned into a secular greeting-card extravaganza that still retains its pagan roots in the deeply embedded signal to mate and procreate. The other is a political invention that serves to promulgate the social status of a minority group. Not out of spite or to signal our growing political discontent with China, but simply out of a need for consistency, the yearly proclamation (beginning in 2011) that makes Chinese New Year a “special non-working holiday” should be discontinued. It is discriminatory and unnecessary.

I have argued this before, but it’s worth repeating. Businessmen grumble, and employees rejoice, at the myriad new holidays enacted to appease or affirm minority groups. Eid al-Fitr, which marks the end of Ramadan, might be seen to be a superfluous holiday in Imperial Manila, but the Philippines is a Muslim country as well as a Christian one, and if we break for Christmas and Holy Week it is only appropriate that we break for the Islamic religious days of celebration, as well.

On the other hand, Chinese New Year, whether in China or among the overseas Chinese, is a secular holiday: it is simply the start of the next lunar year. China and Hong Kong close down for about five days, but this is their annual celebration when they can be with their families. In our country, where the weather is constantly sweltering all year long, we have by tradition followed the West and break for Christmas, which roughly marks the winter solstice. The Chinese have traditionally glorified Spring (note the “auspicious” nature of the word, which appears in names like Spring Moon, Spring Deer, Spring Mountain); even the character is considered exceptionally beautiful and frequently appears in calligraphy. So the big yearly celebration for the Chinese is the Lunar New Year.

Ironically, even while the rest of the Philippines gets in on the act, Chinese-Filipinos are celebrating the holiday less. The reason for this is that, unlike previous generations, they have integrated more into Filipino society and done most of the celebrating during the Christmas and New Year long holiday, which is when they flew across the world to be with their families, cooked up a huge storm, and exchanged gifts. So by the time Chinese New Year rolls around they don’t want to do another round of gift-giving and feasting. In our extended family we do a quiet dinner with all the relatives present, but that’s about it.

But that doesn’t mean it shouldn’t be celebrated. This is the time of the year when everyone asks me the correct way to say Gong Xi Fa Cai, asks me for tikoy, and whether their furniture is arranged the correct way for maximum good luck. All I can tell them is, don’t put the shiny cat waving its paw beside your bedroom, because it’s supposed to bring good luck to your business, so putting it there implies you’re a prostitute. That’s about all I know. What has happened is that Chinese New Year has become an unofficial Filipino-Chinese friendship day, when Filipinos acknowledge the cultural heritage of some of their friends, and we should be thankful that among the Southeast Asian countries, the Chinese are better assimilated than in any other country, including Singapore.

It is for this reason that there should not be a government-mandated holiday. Keeping it as a regular working day, as it was before 2012, underscores the essential Filipino citizenship and affiliation of the Chinese-Filipinos, and highlights the fact that their Chinese-ness is limited to ethnicity and culture. Having a holiday highlights their separateness as a group and singles them out. It can be argued, of course, that celebrating Eid al-Fitr does the same for Muslims; and indeed, it does. But apart from the reasons I have already enumerated, the big difference is that Muslims are a disenfranchised minority, while the Chinese are not.

The Muslims need to be better understood and brought to the fore of public consciousness; not so the Chinese. The small minority of people of Chinese ethnicity in the Philippines control a disproportionate amount of the country’s wealth, and the declaration of the Chinese New Year holiday as a national one feels like pandering, if not to them, then, ominously, to China. The Chinese in the Philippines should celebrate the Lunar New Year in private, as they have done so for the hundreds of years of their presence in the Philippines; and all those who would like to join them in celebrating are welcome to do so. But a holiday for the whole country it should not be.