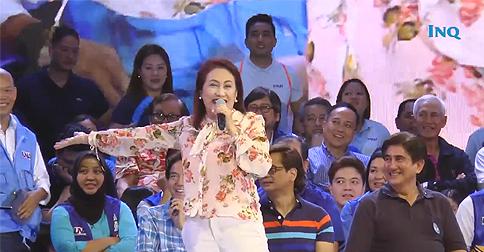 Frozen goes to Broadway, a proposed pay increase for government workers, and more.

Comedienne Ai-Ai delas Alas has declared her support for United Nationalist Alliance after she made an appearance at the party's proclamation rally on February 9. The actress made the crowd laugh by inviting Vice President Jejomar Binay, Sen. Gringo Honasan, and Rep. Manny Pacquiao to dance with her on stage. She also recalled how she and Binay became friends, saying the VP visited her mother’s wake, and pointed out that she was not paid to be at the event. She then hinted at joining politics but added, "matagal pa 'yon." She later said, "Kung lahat ng boboto sa’kin, marami, ibigay niyo na lang sa ating magiging pangulo [Binay] at sa lahat ng kandidato ng UNA."

In an interview with PEP.ph, Jasmine Curtis-Smith finally responded to critics of her viral Snapchat post with her sister's boyfriend, Erwan Heussaff. "Nagulat lang [ako at] the way people reacted," she said. "But, at the end of the day, you can’t avoid that there are cultural differences, there are people who might just don’t [sic] understand the relationship that the three of us have." She added that people "don't know them personally" and said that she and Heussaff have always been close.

3. A Deadpool sequel is already in the works

Although Deadpool has just been released in local theaters, the studio has announced that they are already working on a sequel. Fox has confirmed that its writers, Rhett Reese and Paul Wernick, are confirmed to return and are hoping that they can get director Tim Miller to helm the movie once again. The superhero film stars Ryan Reynolds, Morena Baccarin, TJ Miller, and more.

4. Frozen is headed to Broadway

Yup, the Frozen fever is far from over; in fact, the film's musical adaptation is headed to Broadway. Golden Globe and Obie winner (and two-time Tony Award nominee) Alex Timbers will be directing, while Peter Darling will be the show's choreographer. Meanwhile, Kristen Anderson-Lopez and Robert Lopez, who wrote songs for Disney’s Frozen (including “Let It Go”) are also writing the show’s music and lyrics. The cast and show dates have yet to be announced, but the musical is set to hit the Broadway stage in 2018.

5. This company lets you wear your DNA...as a scarf!

Who says fashion and science don't mix? English designer Iona Inglesby doesn't think so. Her company, Dot One, is letting people wear their DNA as colorful scarves! Customers will have to send a cheek swab to a UK-based testing service called AlphaBiolabs for DNA profiling. This will then be run through an algorithm that translates your unique genetics into a personalized shawl, scarf, or print. Naturally, it doesn't come cheap: A shawl will cost about U.S. $750, while a print is priced at U.S. $200.

6. Nine-month-old Princess Charlotte has her own Marc Jacobs lipstick shade

What were you doing when you were just a year old? Probably learning to walk a bit. But nine-month-old Princess Charlotte has already become the muse of Marc Jacobs Beauty. The brand named a lipstick shade after the Princess as part of its Le Marc lip crème collection. Marc Jacobs Beauty's global vice president and general manager Catherine Gore described the shade as “inspired by the deepest saturated pink tones of an English rose.” Even if it’s exclusively available at Harrods in London, you can still get your hands on these tubes by purchasing them online.

According to Sec. Butch Abad, the Department of Budget and Management will be submitting its recommendation to implement the first part of the proposed salary increase for government workers to Malacañang. He said the first round of increase is on “...average, 27%.” Abad said this will be implemented through an executive order to be issued by P-Noy. "It is unfortunate that Congress has failed to pass the proposed Salary Standardization Law of 2015 as a result of the deadlock on the issue of the indexation of pension of retired military and uniformed personnel," Abad said. He explained that under Presidential Decree No. 985, the President is authorized to revise or update, upon the recommendation of the Department of Budget and Management (DBM), the government’s Compensation and Position Classification System.

8. COMELEC says the first day of the campaign period is "disappointing"

The Commission on Elections expressed its dismay over hard-headed politicians violating rules for fair and proper elections on the first day of the official campaign period. Commission on Elections (COMELEC) spokesman James Jimenez said they will give a one-day deadline to the erring politicians’ camps to take down the illegal campaign materials they posted. Otherwise, the poll body, in cooperation with the Philippine National Police and the Metropolitan Manila Development Authority, will conduct the “Oplan Baklas” drive. “Dear citizens, if other candidates are doing illegal posting, it is also wrong if your preferred candidate is the one doing it,” Jimenez stressed.

9. 10 Art Exhibits to See This February

It's National Arts Month and Manila is thriving with creativity! Bring a date or a friend—or take a solo trip to galleries and museums (because why not) and check out these stellar exhibits.

Valentine's Day is just around the corner! If you want to give your special someone a sweet surprise, we show you where to go for gorgeous bouquets and arrangements.