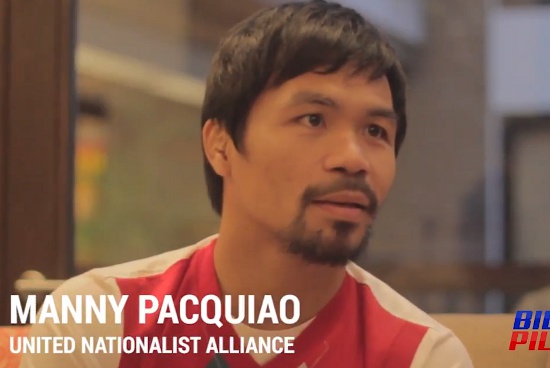 New mom and Kapuso Primetime Queen Marian Rivera is making a TV comeback. Just days after news broke that she would be returning this week to co-host the variety show Sunday Pinasaya, it was also reported that she is set to star in the highly anticipated remake of Encantadia. She will be playing Ynang Reyna, the queen of the mythical kingdom. (The role was previously played by Dawn Zulueta.) Marian will also be getting her own talk show, but its premise has yet to be revealed.

It was a big night for music at the 58th Grammy Awards, with rapper Kendrick Lamar winning Best Rap Album, Best Music Video, Best Rap Song, Best Rap/Sung Collaboration, and Best Rap Performance. Lamar, who earned 11 nominations, was a favorite for Album of the Year, but the award went to Taylor Swift for 1989. She also won Best Music Video and Best Pop Vocal Album. Other winners include Justin Bieber (Best Dance Recording), The Weeknd (Best R&B Performance and Best Urban Contemporary Album), Ed Sheeran (Song of the Year), and Mark Ronson and Bruno Mars (Record of the Year).

Disney has announced that the next installment for Star Wars has officially begun principal photography. They also announced that Oscar winner Benicio Del Toro has joined the cast (he previously said he was playing a villain), alongside Laura Dern and newcomer Kelly Marie Tran in unspecified roles. The latter marks the first Asian-American actor to play a major role in the franchise. Carrie Fisher, Mark Hamill, Oscar Isaac, John Boyega, Daisy Ridley, and Domhnall Gleeson are also set to reprise their roles.

Ryan Reynolds' superhero flick isn't just breaking box-office records in the U.S. (It now holds the record for the biggest domestic opening for an R-rated movie with U.S. $135 million.) Deadpool is also doing quite well at our local box-office, raking in P145 million in just five days in theaters. However, it fell short of beating X-Men: Days of Future Past's opening week earnings of P175 million.

6. Adidas shuts down homophobic comments about their new LGBT ad

Adidas celebrated Valentine's Day with a new ad featuring a same-sex couple, which they captioned on their Instagram account with "The love you take is equal to the love you make." Naturally, their comments section had a couple of homophobic reactions, which they swiftly shut down. When one user threatened to "go to Nike" instead, they replied with a waving and kiss emoji. When another said Valentine's Day was for straight couples and "not for lesbians," they replied, "No, this is a day for love."

7. DOH urges women to postpone their pregnancies over Zika virus

The Department of Health has urged women to delay their pregnancies until more is known about the mosquito-borne Zika virus that is rapidly spreading in Latin America. The virus has been linked to thousands of cases of birth defects, with the World Health Organization previously declaring an international public health emergency. DOH Sec. Janette Garin also urged Filipinos to avoid traveling to countries affected by the virus because travelers who contracted the virus may transmit it sexually to their partners. There is no vaccine or treatment for Zika, and an estimated 80% of infected individuals do not have symptoms.

After a series of delays (including a final list of candidates and technical issues), the Commission on Elections (COMELEC) has finally begun printing nearly 57 million ballots for the elections this May. The printing was three weeks behind schedule, as the original deadline was set for January 26 but was delayed thrice. All ballots, which are estimated to total to over 56 million, are due to be printed by April 25.

9. How did your favorite celebrities look 10 years ago?

We've all had our fair share of cringe-worthy photos we'd rather forget. Even stars aren't spared from the embarrassment, but unfortunately for them, their awkward phases have been documented in movies, TV shows, and old magazines. We present photos of some of your favorite celebrities from 10 years ago.

Who can say no to a box of Ferrero Rocher? It's so popular that plenty of establishments have created scrumptious desserts inspired by the candy. From cakes to macarons, here are 10 Ferrero Rocher masterpieces you need to try.