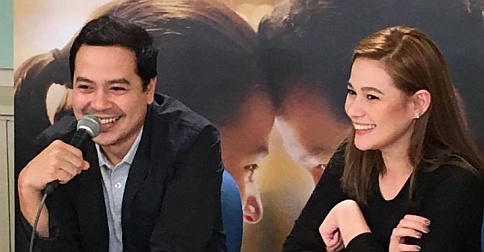 John Lloyd Cruz has finally responded to rumors that he is now dating his perennial onscreen partner, Bea Alonzo. In a report by TV Patrol on February 16, the actor denied the allegations, saying, "Hindi po, magkaibigan po kami." The rumors of a brewing romance between the two followed the sudden split of Alonzo and her long-time boyfriend, Zanjoe Marudo. A source of PEP.ph also previously alleged that Cruz and Angelica Panganiban have also split up, but the two have yet to confirm the news.

Lav Diaz's highly anticipated eight-hour film, Hele Sa Hiwagang Hapis, is set to have its world premiere on February 18 at the prestigious Berlin Film Festival. Its stars, which include Piolo Pascual and John Lloyd Cruz, flew to Berlin to show their support. The film is competing against 14 other entries from across the globe, and is only the third Filipino film to compete in the festival after Ishmael Bernal's Himala in 1982 and Brillante Mendoza's Captive in 2012.

3. You can finally help Leonardo DiCaprio win an Oscar

If you're one of the folks who are really, really rooting for Leonardo DiCaprio to win an Oscar, here's a way you can finally help...sort of. A company called The Line has unveiled a game called Red Carpet Rampage, which lets players guide DiCaprio through the red carpet in pursuit of the golden statue. Along the way, he must avoid fellow Best Actor nominees, paparazzi, and a rampaging Lady Gaga. You can play the game on your browser for free.

4. Natalie Cole's family is not happy with her lack of a Grammys tribute

This year's Grammy Awards were full of touching performance tributes, from David Bowie to BB King, but there was one music legend missing from the roster: Natalie Cole. The singer was honored with a short video within the "In Memoriam" segment instead of a standalone segment, and her family is outraged. "Words cannot express the outrage and utter disappointment at the disrespectful tribute, or lack thereof, to a legendary artist such as our sister," said the statement given to ET on Tuesday, February 16. Cole's career spanned four decades, with nine Grammys and 21 nominations.

5. This guy gave his girlfriend a bouquet of Chick-Fil-A fries and nuggets

Why give your special someone flowers when you can give her something that really screams "love of your life": food! Kamren Kennedy of Alabama gave his girlfriend, Tiera Leftwich, a bouquet of nuggets and waffle fries from U.S. restaurant chain, Chick-Fil-A. "My girlfriend eats Chick-Fil-A about four times throughout the week, and I wanted to give her something that had a little bit of comedy towards it and also something that would be personal," he explained. In return, he got his own bouquet of Reese's candy.

We've seen self-parking cars. Now, get ready for the super-revolutionary self-parking...chairs? Japanese company Nissan has unveiled the Intelligent Parking Chairs, which lets disorganized chairs snap to life and rearrange in their proper position. Now before you start placing olders, it doesn't look like they'll be selling these to consumers. According to Mashable, the chairs are just a way to promote their new Intelligent Park Assist self-parking car system.

On Wednesday, the Civil Aviation Authority of the Philippines put all Philippine airports on Zika virus alert, ordering all airlines, authorities, and operators to take the proper precautions in preventing the disease from spreading in the country. The mosquito-borne virus was previously declared an international health concern by the World Health Organization.

8. Poe to name Aquino anti-corruption adviser if she wins presidency

In a press conference today, February 17, Sen. Grace Poe said that she plans to name President Aquino as an adviser on anti-corruption if she wins the upcoming May 2016 elections. "Hihingan ng advisory role ang ating pangulo. Kasi kahit papano, meron din siyang mga nagawa. Halimbawa na lang, sa pakikipaglaban sa korapsyon," she said. She also noted that he could have a position in international affairs, but not necessarily as an ambassador. Instead, he could serve as a special international envoy.

When it comes to Philippine politics, it's usually hard to filter fact from fiction (especially with all the drama that takes place). Before you cast your vote this May, get to know your presidential bets with this video that breaks down their views on issues like tax reform, death penalty, and more.

The next time you need to relax, skip your usual home massage and go for something a little more luxurious. We round up 10 spa treatments that will give you a well-deserved recharge without breaking the bank.