Alma Moreno tells Manny Pacquiao not to use religion to insult others + more things you might have missed today
Loading
Already a member? Log in
No account yet? Create Account
Spot.ph is your one-stop urban lifestyle guide to the best of Manila. 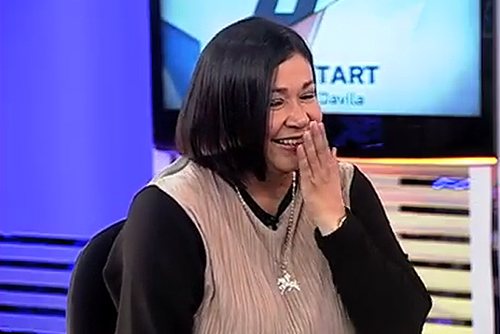 1. Alma Moreno tells Manny Pacquiao not to use religion to insult others

James Reid is in the middle of another controversy involving his fans, and this time it's because he was reportedly not a gentleman towards his onscreen partner, Nadine Lustre. The two were photographed shopping in Power Plant Mall on Valentine's Day. In one shot, the two were standing on the escalator, with Lustre carrying several packages and Reid simply standing in front of her. She said that he had offered to help her but she declined. "I really don’t mind kung ako 'yong magbibitbit," she said. "Kasi, number one, it’s really not heavy. Number two, kaya ko naman po."

Comedian Vice Ganda was one of Manny Pacquiao's first and most vocal critics, following the latter's anti-LGBT statements. The host was accused of being a hypocrite for criticizing Pacquiao when he had offended plus-sized people with a joke directed at journalist Jessica Soho in 2013. Vice took to his Twitter account on February 17 to respond. "A joke of a comedian is different from a statement of a 'politician.' So why take a joke seriously and take a serious statement as a joke?" he wrote. "I am not the issue. This is not about me. It is about a serious remark that affects the entire LGBT community. Don't divert the issue."

A Change.org petition is actually demanding that Ryan Reynolds host an episode of Saturday Night Live as his superhero character, Deadpool. "How would this not be hilarious having Deadpool in sketches, breaking the fourth wall, and inserting some of his brand of humor?" He asked in the petition, which was addressed to Reynolds, NBC, and SNL creator and showrunner, Lorne Michaels. The petition has earned over 18,000 signatures as of writing.

5. Vanessa Hudgens may be facing jail time over an Instagram photo

Yes, you read that right. Actress Vanessa Hudgens is under investigation by authorities of the Coconino National Forest in Sedona, Arizona. On Monday, Hudgens posted a now-deleted photo of her name and her boyfriend, actor Austin Butler, scratched into the face of a rock. It turns out the rock is one of Arizona's protected red rocks and defacing it would qualify as a Class 2 misdemeanor, which carries a maximum penalty of six months in jail and/or a U.S. $5,000 fine.

6. Now you can eat your feelings with these breakup cookies

The phrase "eat your feelings" can now be a reality thanks to this Instagram account called Eat Your Heart Out. The account is dedicated to posting photos of baked treats that feature "words remembered from heartbreak." Think sugar cookies that spell out "I can't do this," a souffle that says "I don't think I actually loved you," and a cake that is decorated with "I wish I met you in a year."

7. Sen. Trillanes says VP Binay "could be next Gloria Arroyo"

On Thursday, Sen. Antonio Trillanes IV expressed fear that Vice President Jejomar Binay would run the country the way former president Gloria Macapagal-Arroyo did. "Nakikita ko na—kung ano 'yong pagpapatakbo ni GMA noon na sindi-sindikato, ganun ang mangyayari sa Pilipinas," he said to reporters. "'Magnakaw kayo as much as you can basta magbigay kayo ng boundary.'" He added that while Binay has the funds to improve lives, he reportedly pockets it for himself instead.

8. Pacquiao says he respects Nike’s decision to cut ties with him

On Thursday morning, Manny Pacquiao responded to Nike's decision to cut ties with him following his anti-LGBT remarks. "Kung anuman decision nila, desisyon nila 'yon at nirerespeto ko," he told GMA News. Pacquiao, who has been with Nike since 2006, said they were previously in talks for a clothing sponsorship for his upcoming match against Timothy Bradley in April. Meanwhile, his promoter, Bob Arum, called Nike's decision "appropriate," saying, "They're [Nike] in the business of selling products and Manny's remarks were offensive to many people, particularly those in the gay and lesbian community. And Manny shouldn't have said what he did."

9. 10 Random Facts About Manila That Will Blow Your Mind

There's more to the city of Manila than meets the eye; in fact, there's a lot of fascinating history that many of us probably don't even know about. Trust us, you'd be surprised.

On the surface, onion rings might seem so simple and commonplace that people don't often give them a second thought. It takes the most precise recipe to make them memorable, and we've found 10 places that get the tricky formula right.