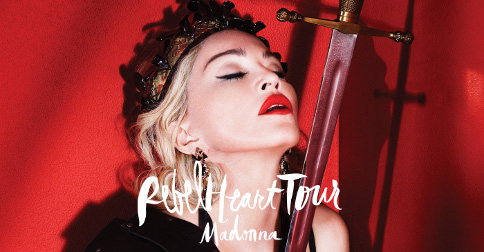 Gillian Flynn goes to TV, Donald Trump in Game of Thrones, and more.

International pop star Madonna landed in Manila early on Monday, February 22, ahead of her two-night concert on Wednesday and Thursday at the SM Mall of Asia Arena. The singer reportedly did not pass through the normal customs and immigration inspections, and airline personnel were barred from taking photos of her. Her two-leg stopover in the country is part of her worldwide Rebel Heart tour, and marks her first-ever concert in the Philippines.

In an Instagram post on Sunday, February 21, Jennylyn Mercado revealed that her upcoming rom-com with John Lloyd Cruz would be entitled Just The 3 of Us. They even have a catchy love-team portmanteau: #JenLloyd. Plot details have yet to be revealed, but the Star Cinema film is helmed by Cathy Garcia-Molina, and is slated for release this year.

In a letter sent to PEP.ph, TV5 clarified that the 30-second video of Sarangani Rep. Manny Pacquiao where he compared homosexuals to animals was "minimally edited in good faith and with reasonable care." Former Kapisanan ng Brodkaster ng Pilipinas (KBP) National President Mario Garcia accused the network of splicing the interview footage, saying, "The statement was taken out of context dahil in-edit. Pinutol. Malisyoso 'yon. May intention to sensationalize [the interview], obviously." Meanwhile, the network said that there was "no intention to change the context or misrepresent the essence of Mr. Pacquiao’s statements" and that they had given Pacquiao's camp the full, raw footage on the day the video was posted.

Amy Adams is headed to the small screen! The Oscar-nominated actress has signed on to star in the TV adaptation of Gillian Flynn's novel, Sharp Objects. Dallas Buyers Club's Jean-Marc Vallee has also signed on to direct the project, but a network has yet to pick up the show. The 2006 novel centers on a reporter (Adams) who is forced to return to her small hometown in order to investigate the murders of two pre-teen girls.

5. This mashup of Game of Thrones and Donald Trump is a must-watch

It turns out reality star-turned-presidential candidate Donald Trump fits quite well in the crazy world of Westeros. A YouTube clip combined real footage of Trump with key scenes from HBO's Game of Thrones, and the results are impressively seamless. The clip had over 400,000 views as of writing.

You read that right: a lock of John Lennon's hair (which was supposedly obtained from a haircut he got in 1967) was sold in an auction for a whopping U.S. $35,000. (That's about P1.5 million for a clump of hair!) The unique piece of Beatles memorabilia was part of a Dallas-based auction called Heritage Auctions and was sold to a collector from the U.K. named Paul Fraser.

7. COMELEC urged to study possible breach in campaign rules due to Pacquiao fight

On Monday, independent senatorial candidate Walden Bello formally filed a petition before the COMELEC to study whether Manny Pacquiao's upcoming bout with Timothy Bradley will violate campaign rules. He lamented that the coverage before, during and after the fight—which is supposedly Pacquiao’s last—will give the latter an advantage, as it could be considered "political advertisement." He earlier urged the senatorial aspirant to either postpone his fight to after the elections or take a leave from boxing altogether.

The latest Pulse Asia survey revealed that 34% of Pinoys don't mind voting for candidates who hail from political dynasties. Still, it's worth noting that 32% of Pinoys refuse to vote for these candidates, while 34% were undecided. Although the Constitution forbids political dynasties, Congress has yet to enact the Anti-Political Dynasty Bill.

Relationships are already tough on their own, and now you have to deal with all that pesky distance between you and your significant other. Whenever you feel that absence doesn't make the heart grow fonder, here are 10 Pinoy movie quotes that will speak right to your feels.

10. 10 Highlighters That Will Get You Glowing

If you want to flaunt dewy and glowing skin, but don't exactly know where to begin, we've got you covered. We found 10 highlighters that will easily help you achieve that effortlessly fresh and healthy glow.