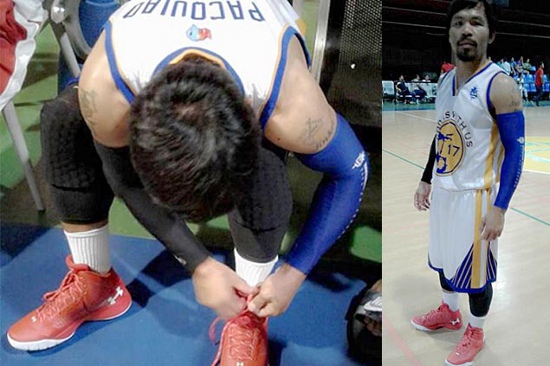 1. Pacquiao reportedly not in talks to sign with Under Armour

After Nike cut ties with Manny Pacquiao following the latter's anti-LGBT remarks, the boxer was seen sporting a pair of Under Armour shoes for a basketball game. This led to speculation that the senatorial candidate would be signing a deal with Nike's rival brand, but a report by the Baltimore Sun quickly dispelled the rumors. "Under Armour isn't in talks with Pacquiao, according to a source familiar with the situation," said the report. The brand's corporate headquarters is located in Baltimore.

On the Wings of Love co-director Antoinette Jadaone has mostly remained tightlipped about the relationship of co-stars James Reid and Nadine Lustre, simply calling them "close" and "may sariling mundo." In a new interview with ABS-CBN's Push, Jadaone said she was happy that her observations about them turned out to be true. "Nakasama ko sila sa acting workshop, before we started On the Wings, akala ko talaga [na] sila. Hindi ko alam na hindi pa sila," she said. Jadaone also praised the love team for their growth throughout the show, adding, "After seven months, nakita mong stars na sila. Parang they’ve grown into stars. So, nakakatuwa na parang nag-grow sila as actors, as people, ganyan."

The veteran actor, whose pipes are best known for producing the voice of God in Bruce Almighty, can now be the commuter’s travel buddy courtesy of Waze. To promote his new movie, London Has Fallen, Freeman will spout phrases like, “It’s been my honor and duty to see you through your mission,” in his best Vice President Trumbull voice. We have our fingers crossed that the feature will make its way here.

4. This CEO invites job candidates to breakfast and asks the restaurant to mess up their order

Most of us are no strangers to going through a series of tests in order to qualify for a job, but this CEO is taking it to another level. In an interview with The New York Times, Charles Schwab said he is most concerned about the character of his potential employees. He invites them to breakfast, asks the manager to mess up their order, and watches what happens next. "I do that because I want to see how the person responds," he explains. "That will help me understand how they deal with adversity. Are they upset, are they frustrated, or are they understanding? Life is like that, and business is like that. It's just another way to get a look inside their heart rather than their head."

A 33-year-old man named Simon Smith legally changed his name to the first thing that popped into his head: Bacon Double Cheeseburger. He joins a fascinating list of people who went to the U.K. Deed Poll Service to choose a spectacular new title. This includes someone who is now legally named Bruce Wayne, a person named Happy Birthday, and a very humble couple who chose Mr. & Mrs. Amazing. The name-changing process takes four working days and costs about U.S. $47. The name can't promote criminal activities, incite racial hatred or ridicule the government or organizations, and names like Jesus, Saint, or Satan are banned.

6. Justin Trudeau is the first Canadian Prime Minister to join a Pride parade

On Tuesday, February 23, Canadian prime minister Justin Trudeau made history by being the first Canadian leader to join a Pride parade in Toronto. He made the announcement via his Instagram account, which he captioned with "Very much looking forward to being there again, this time as PM." Aside from Trudeau, other Canadian officials will also be joining the event, including Finance Minister Bill Morneau and Toronto Mayor John Tory. Even gay Syrian refugees are expected to participate in the activities.

Senatorial candidate Susan Ople has urged the COMELEC to consider holding a fourth presidential debate abroad for the benefit of an estimated 1.4 million absentee voters. She suggested holding it in either Hong Kong or Dubai, two countries that both have a large population of Pinoy OFWs. As of 2015, the COMELEC said some 300,000 OFWs in the Middle East have signed up for overseas absentee voting, while 105,000 registered to vote in Hong Kong. The polling body has yet to respond to her request.

On Monday, the Metropolitan Manila Development Authority announced that their high-definition CCTV cameras, which were installed along major thoroughfares, can zero in on plate numbers. Erring motorists are warned: Those with tampered plate numbers will be held responsible for traffic violations. MMDA currently has over 400 CCTV cameras at major streets, but they plan to install more.

No matter how fluent we are in speaking our native language, there are some words that will still slip past our radar. For instance, did you know haynayan means biology, and pook-sapot means website? Neither did we!

Matte lippies are all the rage. We show you how you can easily rock the vibrant trend with these 10 lipsticks that are also easy on the budget!