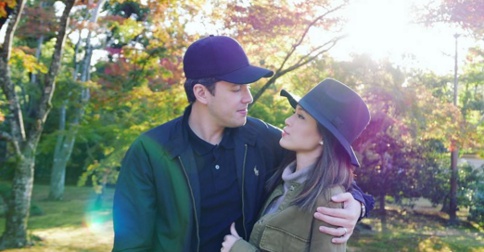 Actress Toni Gonzaga has finally responded to an earlier report by PEP.ph that claimed she is pregnant with her first child. In an interview with Boy Abunda during her induction into the AnakTV Hall of Fame on Tuesday, she declined to comment on the rumors, saying, "I think this is not the right moment and the right place to talk about it. Siguro may tamang panahon." In an earlier interview in July 2015, she was quoted saying that she wanted to finish her upcoming show, Written in Our Stars, before having a baby.

If you've scrolled through your Facebook page in the past few days, you've probably seen a photo of Manny Pacquiao's campaign car in front of a house reportedly owned by former actress, Krista Ranillo. (The latter was tagged in the boxer's cheating scandal a few years ago.) On Wednesday, Pacquiao's chief of staff Jake Joson announced that he filed a complaint against Lorraine Marie Badoy, the person who posted the viral Facebook photo. Joson clarified that the house was his and not Ranillo's, and added, "We can forgive, but we should give justice to all those people who maliciously make up stories to ruin our People's Champ Manny Pacquiao's name and my name."

During the February 23 episode of her morning show, Kris TV, Kris Aquino weighed in on the heated same-sex marriage debate, saying that she is in favor of civil unions, especially in terms of inheritance. "Civil union only because [it's] for partners who have been together, nag-pundar together for so many years," she explained. She also said that the country is still not "prepared" to accept same-sex marriage, saying, "We are not America. Hindi pa tayo handa sa ganoon."

4. America's Next Top Model is getting a reboot

Get ready for more smizing! VH1 has announced plans to revive supermodel Tyra Banks' popular reality show, America's Next Top Model. The long-running series, which ended its run on December 25, 2015, will be set in New York City and feature a new host and panel of judges. Banks will still serve as the show's executive producer. A debut date has yet to be revealed.

5. Man gets fined for burping

An Austrian man was fined U.S. $77 for letting out a huge burp after dining at a kebab stand. Twenty-seven-year-old Edin Mehic said that he had eaten his onion-laden meal quickly, which caused the burp, and was fined by a nearby police officer for alleged breach of peace. "Thank God [for] this guy protecting my beloved city of Vienna! What would we do without him?" he wrote in a Facebook page. "I guess things can't be as bad in the area as we read in the papers because if they have time to chase up burping, it means there isn't anything more serious to worry about." Supporters plan to gather in Praterstern to drink soda and let out loud belches.

Stacy Engman, dubbed the "art world’s Lady Gaga," was wearing a tiara when she fell asleep on her seatmate Christina Tyler’s lap. The former claimed to have woken up to an armrest being slammed on her head, while Tyler accused Engman of raining insults upon her. Tyler was trying to pacify Engman, who then allegedly bit her. Engman vehemently denies the accusation, and said that the dispute must have been fueled by class envy provoked by her tiara (which was pinned to her hair for a photoshoot). She still plans to consult her lawyer, likening the incident to bullying.

Lipa Archbishop Ramon Arguelles , who once called Lady Gaga a "confirmed cardholder of devil’s worship" when she held a show in the Philippines in 2012, has turned his attention to Madonna. "Why is the Catholic Philippines the favorite venue for blasphemy against God and the Holy Mother?” the archbishop lamented. He encourages his flock to avoid the two-day show, saying it may lead to committing sins. The Archbishop also made a connection between pop music and the terror attacks in Paris in 2015. "Pop music is usually about drugs, rape," Arguelles told Inquirer.net. "Remember [the attack] in Paris? The one performing there then was called 'Death' something."

In an interview with Karen Davila for ANC's Headstart, former MMDA chair and senatorial hopeful Francis Tolentino vowed he would push for a "stronger" MMDA once he is elected into office. He bared plans to revise the MMDA and other government offices' charters for a "more streamlined and cohesive agency in Metro Manila." He added that the scheme would avoid conflicting actions and projects from various government agencies.

9. 10 Things Only Tall People Would Know

Being blessed with height has its perks, but let's be honest: it's tough out there for a tall person. It's not always easy living in a country filled with shorter people, and here are 10 reasons why.

10. 10 New Places for Good Eats: The Next Big Food Hubs in Manila

Here in Manila, you can be sure that there's always another food adventure waiting to be discovered. Go beyond your usual Kapitolyo and Maginhawa food crawls! Slip on your stretchy pants and make your way through these 10 up-and-coming food hubs in the Metro.