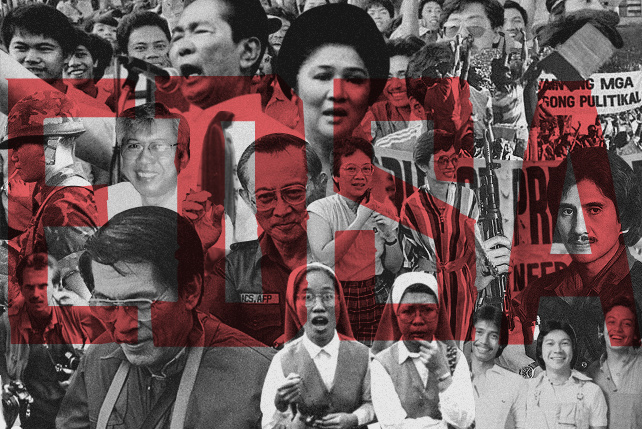 Journalist, poet, scriptwriter, and editor Pete Lacaba looks back on three days that made history. 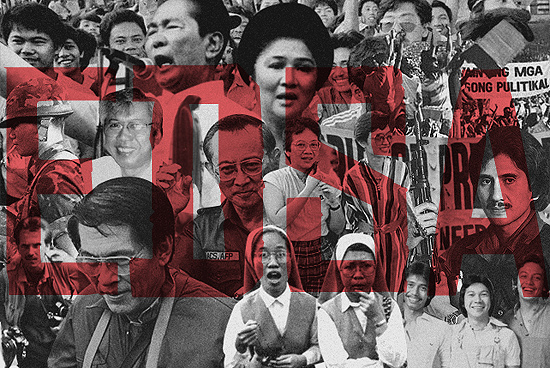 (SPOT.ph) Editor's Note: This is a repost of Mr. Pete Lacaba's column published February 21, 1996 in the Manila Times. Mr. Lacaba is a journalist, scriptwriter, poet, and editor. He is a University of the Philippines Gawad Plaridel awardee, and has received a Carlos Palanca Memorial Award for Poetry in Filipino.

FEBRUARY 22, 1986, was a Saturday. At that time I was editor of a magazine, the now defunct National Midweek, then a small, almost invisible part of that committed conglomeration that the Marcos regime derided as “the mosquito press.” Saturday was normally a day off, but we had not succeeded in closing the issue the night before, and on this particular Saturday I was helping the staff artists with the pre-computer cut-and-paste layout.

Late that afternoon, our landlord—we were renting a room on the ground floor of his Sta. Mesa house—came down with his radio to bring us the latest news: Defense Minister Juan Ponce Enrile had announced his break with dictatorship and was holed up in Camp Aguinaldo. We immediately sensed that something really big was happening, or about to happen. We decided to stop work on the issue of Midweek that we were planning to close.

The rest of the night and the next three days are now a blur of memories that I can no longer get in proper sequence. The magazine temporarily moved its base of operations from the office to my house, which was near the corner of EDSA and only two blocks away from the Bohol Avenue studios of what was then Channel 4, the government station.

I remember going with my wife every day to EDSA—or rather, that strip of EDSA between Camp Aguinaldo and Camp Crame. Sometimes our 15-year-old son joined us, though he and his high-school buddies had their own EDSA itinerary.

We never camped out, however. Part of the reason, on my part, was psychological. Crame was prison and painful memories. But now the festive crowd was compelling me to view Crame as a symbol of freedom and democracy. I remember bumping into playwright Boni Ilagan, my cellmate in the early years of martial rule. Outside the camp gates, we reflected on the irony of being in a crowd that was guarding our jailers and torturers.

So my wife and I never stayed long in the Crame-Aguinaldo area. When we weren’t home offering snacks and drinks to correspondents and photographers of various publications who asked to use our telephone and our toilet, we moved around.

We were outside Channel 4 when reformist troops captured it. Afterward, they threw huge oil paintings of Marcos and Imelda to the crowds gathered outside, who stomped and spat on the canvases and finally set them on fire.

We were on a late-morning jog when we chanced upon a firefight between reformist troops on the ground and loyalist soldiers guarding the Channel 9 transmission tower on Panay Avenue.

When word got around that Radio Veritas in Novaliches was to be attacked by loyalists, we rushed there with a contingent from the Concerned Artists of the Philippines. We joked that, while the rest of the Filipino people were protecting Enrile and General Fidel Ramos on EDSA, we were protecting the Apo Hiking Society.

Much has been written about Nora Aunor going to Aguinaldo and being booed away by the crowd because she had campaigned for the Marcoses, then gutsily going back the following night and being tearfully embraced by Enrile. Me, I remember seeing bold star Sarsi Emmanuel on Quezon Avenue, seated on the hood of a car and gleefully announcing that Marcos had fallen.

It was the night of February 25, the fourth day of the people’s uprising, and my wife and I were with Sarsi’s Boatman director, Tikoy Aguiluz. This was the second time word of the Marcoses’ leaving Malacañang had spread, and we were not sure if this was another false alarm. But we hitched a ride with Tikoy to Sta. Mesa and from there walked to the Malacañang gates. I briefly caught sight of my brother, the one who would later be imprisoned under Cory’s administration, just before he disappeared behind the closing gates.

Shut out of the Palace, we walked back to Tikoy’s car on Sta. Mesa. I picked up a piece of barbed wire that someone had shaped into a crown of thorns, but I dropped it somewhere along the way because the crowd was so thick I was afraid of hurting someone. On Sta. Mesa, I remember seeing Joker Arroyo and Teddy Boy Locsin momentarily getting out of a car that couldn’t get past the crowds. I exchanged a few words with Joker, and then he and Teddy Boy got back into the car and inched their way toward Malacañang, while I walked on to oblivion.

Senator Gringo Honasan wonders whether Cory Aquino was on EDSA during those four momentous days in February. This is a foolish question. On those four days, EDSA was not just a strip of road between two military camps. EDSA was the entire country.

Edsa Martial Law Martial Law, Batas Militar
Your Guide to Thriving in This Strange New World
Staying
In? What to watch, what to eat, and where to shop from home
OR
Heading
Out? What you need to know to stay safe when heading out