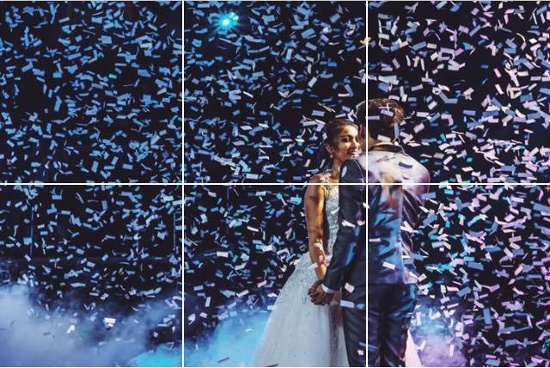 James Reid had fans swooning on Thursday when he posted a sweet photo collage dedicated to his girlfriend and on-screen partner, Nadine Lustre. The collage, which was a shot of the couple during their sold-out concert in Araneta Coliseum, was captioned with, "This is the highlight of my life so far. Our adventure has just begun." He also got mushy on his Twitter account, where he called himself the "happiest man in the world."

2. Gerald Anderson says he owes his career to Kim Chiu

In an interview with ABS-CBN, Gerald Anderson admitted that his former girlfriend and love-team partner, Kim Chiu, played a major role in his 10 years in showbiz. "Alam mo, hanggang sa matapos ang career ko, [Kimerald] will always be a part of me," he said. "It's very phenomenal talaga at wala talaga ako rito kung hindi dahil kay Kim." He also added that he is open to working with Chiu, who is currently paired with her rumored boyfriend, Xian Lim. "If there are future projects na we can work together for our fans [or] for ourselves bakit naman hindi?" He said.

In case you haven't already heard, Cruel Intentions is headed to TV! NBC is set to start a pilot soon, and star Sarah Michelle Gellar has confirmed to reprise her famous role as the scheming Kathryn Merteuil. Should the pilot do well and the series moves forward, Gellar will be a series regular. The show picks up 15 years after the events of the 1999 movie, and will also feature the son of Kathryn's late stepbrother, Sebastian Valmont (once played by Ryan Philippe). The film's original producers will also return, but it is still unclear when the show will air.

4. This "Everything Donut" fuses a donut with a bagel

Forget cronuts; this New York City-based restaurant has just created the "Everything Donut," fusing a donut and a bagel together. The mashup is a sweet donut covered in cream cheese glaze then topped with sesame seeds, poppy seeds, pepitas (pumpkin seeds), garlic, and sea salt. So far, customers seem to have taken to the sweet-and-savory combo pretty well.

5. Graduating high school student turns out to be a 23-year-old man

In Pennsylvania, U.S.A, Asher Potts was a member of the National Honor Society and an all-around good guy—a young role model that any kid could look up to. But a few months shy of graduating from high school, police caught on that Asher Potts was actually Artur Samarin, a 23-year-old Ukrainian national. Samarin’s visa was only for a short stay. When it expired, he took on a new identity and enrolled in high school as a freshman. According to the police, the identity was completely made-up, and no one was harmed when he assumed it.

6. Dong Yan fined and put on probation after being caught smuggling turtles in his pants

Just so you know, this has nothing to do with Dingdong Dantes and Marian Rivera. Instead, Dong Yan is a man who, back in 2014, attempted to enter Canada with 38 turtles inside his pants. He was caught at the Niagara border crossing with the hidden turtles inside plastic bags secured to his legs. He was recently slapped with a fine of about U.S. $2,600, and put on probation for a couple of years. To add to that, Yan is not allowed to own turtles and tortoises for a decade, and should do 50 hours of community service. He was also told to write a letter about the whole incident.

"It's okay, heaven is big enough for everyone and we all have something to pray for," Imelda Marcos eportedly said in Filipino when she was told that the mass she attended at the Baclaran Church in Paranaque City was for the victims who perished during the late Ferdinand Marcos’ rule. According to Inquirer.net, the former First Lady is a devotee of the Our Lady of Perpetual Help and usually attends Wednesday masses at the said church. "We go there every Wednesday to hear mass because we’re completing the novena for nine consecutive Wednesdays," Imelda’s staff member Ricardo Malasa explained. Imelda was photographed unknowingly sitting with the victims, and was surprised at the mentions of martial law during mass.

Gabriel Salvador was serving CBS Corp. CEO and president Les Moonves in a restaurant, when the former brought up arranging a fight between Floyd Mayweather and Manny Pacquiao. Salvador’s son trained at the gym owned by Freddie Roach, Manny Pacquiao’s trainer. With that connection in mind, the waiter’s son got Roach’s number and gave it to his father, who in turn called Roach, and before everyone knew it, the Fight of the Century was arranged, with Salvador apparently shunned to the side. Now the waiter wants his share of the fight proceeds and is suing both Pacquiao and CBS Corp. stating that he was guaranteed a finder’s fee of about U.S. $8.6 million. The Mayweather vs. Pacquiao fight is considered the most lucrative match up in the history of boxing, earning over U.S. $400 million.

Ask any avid Pinoy teleserye fan, and they'll tell you that a kidnapping scenario and a grand wedding are practically staples in a series finale. Here are 10 local soap operas that took this Pinoy TV trope to another level, with triple weddings, stunning designer gowns, and more.

It's hard to keep up with all the new places popping up left and right in Bonifacio Global City. If you're looking to try something new, we round up the latest in BGC's booming restaurant scene.