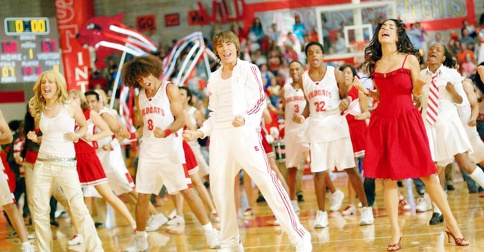 Legends of the Hidden Temple returns to TV, Leni Robredo on social media, and more.

1. High School Musical 4 is in the works

It looks like HSM fans can "stick to the status quo" all over again! Disney Channel has officially kicked off a U.S.-based search for an all-new cast for the fourth installment of High School Musical. None of the original cast have announced plans to reprise their roles, but the movie will take place in the same East High. The screenplay will be written by Peter Barsocchini (who wrote all three of the previous movies).

2. Anne Curtis and Derek Ramsay to reunite in new movie

We haven't seen Anne Curtis and Derek Ramsay onscreen together since No Other Woman in 2011 and A Secret Affair in 2012. In a recent press conference, the former confirmed that they will be teaming up once again, but didn't disclose any further details. This would be Curtis' first movie after 2014's Blood Ransom.

Meanwhile at the Kapuso network, Heart Evangelista announced that she will be reuniting with Dennis Trillo for a new teleserye entitled Juan Happy Love Story. "[It's] a romantic comedy that's a little sexy and naughty," she explained in her Instagram post. The two previously worked together on two shows: Dwarfina in 2011 and Legacy in 2012.

4. Legends of the Hidden Temple is returning to TV

Disney Channel isn't the only one cashing in on the nostalgia. Nickelodeon is bringing back its '90s game show favorite, Legends of the Hidden Temple. Now before you get all excited about joining, the show will be a live-action TV movie about the backstory of the game. The show is set to debut late 2016.

A Reddit user and full-time student shared his experience living with his mother for 13 months...which ended with a ridiculous bill. His mom charged him to pay a portion of the utility bills, as well as fees for her cleaning the house and doing the chores. More notably, she charged him U.S. $1,000 for "being an asshole and not appreciative of [his] mother's support, financially or otherwise."

6. Osama bin Laden was anxious about wife’s trip to the dentist

In a letter that was part of the haul in the 2011 raid in Abbottabad, Pakistan, the late Al Qaeda leader Osama bin Laden had written about his fears over his wife’s tooth, specifically the tracking device supposedly implanted in it. “The size of the chip is about the length of a grain and the width of a fine piece of vermicelli,” bin Laden relayed in the letter, which was released on Tuesday. Using the alias Abu Abdallah, he told the reader to destroy the letter after reading.

Since taking over the post on February 12, new director of the Manila Traffic and Parking Bureau Benjamin Feliciano Jr. has already terminated the services of a number or traffic personnel, including two men whose misdemeanors were caught on camera and even shown on national television. One of them, Miller Cadampog, admitted to taking P40 from a motorist. The former claimed that though he declined, he accepted the money in the end since the latter stubbornly offered it to him. Most of the Manila Traffic and Parking Bureau (MTPB) enforcers get P6,000 to P10,000 as monthly allowances, plus part of the ticket fines as commission.

8. Leni Robredo warns students about "wrong information" from the Internet

Vice presidential candidate Leni Robredo spoke about the assortment of information found on the Internet. “I don’t know if you are aware na ngayong election, may mga kandidatong nagha-hire ng entire companies para lang mag-feed ng wrong information sa Internet,” Robredo told the college students of the University of Perpetual Help Las Piñas yesterday. She also pointed out that candidates are sure to talk about what the public likes to hear, and advised the audience to check track records to see if these back up the claims.

If you're looking for a quick weekend getaway without the hassle of going out of town, we found five beautiful Airbnbs in Manila that will give you the rest and relaxation you deserve.

The best films about food can make any viewer feel like they are smelling, experiencing, or even tasting the gorgeous dishes onscreen. We found 10 more foodie films that beautifully present all sorts of cuisines, but be warned: You'll be very, very hungry in no time.