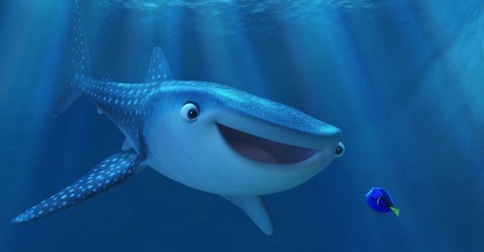 It's been 13 years since we last saw our favorite fishy friends from Pixar. The studio has finally released the first full-length trailer of its sequel, Finding Dory, which tackles Dory's quest to find her family. Ellen DeGeneres will reprise her role, alongside a roster of new characters voiced by Ed O'Neill, Diane Keaton, Idris Elba, and Michael Sheen. The movie is in theaters June 17.

Just days after former actress Rica Peralejo announced that she was pregnant with her second child, she reported that she had lost her six-week-old baby. "It is most probably a developmental problem. An abnormality with the baby that is not compatible with life so it didn’t allow my baby to progress any further," she wrote in her blog. "My doctor said that nothing could have altered this, even if I rested [or] stayed home." She reportedly found out she was pregnant in January, but only announced it to fans on Sunday.

Regardless of how you feel about Kanye West, you probably already know that his Twitter is full of entertaining gems. Vanity Fair took advantage of it and asked celebrities at the Oscars after-party to dramatically read some of them. Expect gripping performances from the likes of Patrick Stewart, Whoopi Goldberg, J.J. Abrams, Will Arnett, Mindy Kaling, and more.

4. Chick-Fil-A will give customers free ice cream if they put down their phones

We get it; it's tough to stay away from your phone (especially if you're really busy...or social). U.S.-based restaurant chain Chick-Fil-A is now offering to give customers an ice cream cone if they put down their phones. Dubbed a "cell phone coop," customers are challenged to switch their phones to silent and leave their phones in the coop for a "distraction-free" meal.

5. You’re invited to hack the Pentagon

You can try, as long as you’re an American citizen and will pass their background check, that is. The Pentagon wants to see if there are any defects in certain public U.S. Defense Department webpages. Called “Hack the Pentagon,” the program is similar to bug bounties conducted by some companies: a reward is given to the person who reports a bug in their system. The Pentagon aims to eliminate the threat of hackers, thus the recent launch of the organized test of their cyber security. There is no word yet on what kind of reward the agency will give to successful, qualified hackers, but they are taking into consideration offering monetary compensation.

In Canada, a couple of plumbers were restoring a customer’s bathroom when they found a gold brick worth $50,000. They spotted it under some debris and thought that it belonged to the trash. “I [saw] a gold shimmery thing on the ground and I thought it was a cooper light fixture,” plumber Dean Materi said. “But when I went to shovel it up, it seemed kind of heavy. I picked it up and it was a gold brick.” His boss Alif Babul decided that they hand over the brick to the owner. “We always return what we find,” he said, referring to one of their company rules.

“Nothing happens, only purely corruption,” presidential candidate Rodrigo Duterte told the crowd in Lingayen, Pangasinan on March 2, Wednesday, referring to the current administration. Duterte called Liberal Party standard bearer Mar Roxas an idiot, saying “Lahat ng Pilipinas may shabu.” Vice President Jejomar Binay wasn’t spared either. “Maybe he can talk about criminality, about drugs, but he cannot talk about corruption because he himself has baggage,” Duterte said. PDP-Laban spokesperson Paola Alvarez also joined in, saying that the Aquino administration’s slogan was “nothing but a platform of deceit,” and continued to point at the Roxas campaign’s use of government vehicles.

When you're back from your beach getaway or out-of-town road trip, it's time to learn something new. From arts and crafts to cooking classes, we round up the best workshops for adults this summer.

No matter how many times you tell yourself that you're staying away from fried food, it's hard to resist a plate of crispy, golden chicken. Ready your appetite!