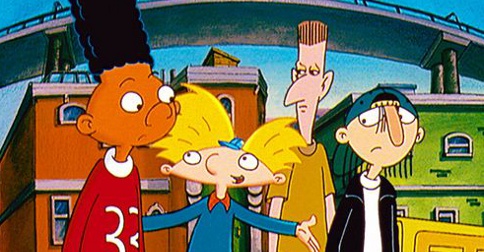 Nickelodeon is airing a new Hey Arnold! movie + more things you might have missed today

1. A lot of '90s kids are probably going to be excited about a new Hey Arnold! movie

We don't know about you, but we're definitely feeling like kids again! Nickelodeon has officially greenlit a new Hey Arnold! TV movie, which will pick up right where the original series ended back in 2002. The two-part, two-hour movie will be entitled Hey! Arnold: The Jungle Movie, and will involve Arnold's search for his long-lost parents.

Former adult film star Maria Ozawa made headlines yesterday, March 3, when she said that she had a one-night stand with her Nilalang co-star, Cesar Montano. In an interview with radio DJ Mo Twister, she admitted that she slept with him before they started filming their MMFF 2015 entry, dubbing it "hello sex." The actress took to her Twitter to backtrack on her statement, calling it a "joke" and that she was just "having fun" with the topic during the show.

Facebook Messenger is about to get a lot more musical. The messaging platform has added a new feature that lets users share Spotify playlists and songs with friends within Messenger chat threads. It should be noted that you can't play music from within the app just yet; instead, the track or playlist will open in the Spotify app.

4. Science explains why it hurts to step on LEGOs

A YouTube channel called American Chemical Society Reactions has finally explained why stepping on a LEGO block hurts a lot. According to their video, the average human foot is home to 200,000 sensory receptors, compounded by the full force of your body weight when you come in contact with the toy.

5. A team of refugees will be competing in the Olympics for the first time

The 2016 Olympics in Rio de Janeiro will be a landmark one for refugees. Among the 20 million people forced to leave their countries, the International Olympic Committee found 43 athletes eligible for the Olympics. An estimated 10 people will be taking part in the games, and will be marching under the International Olympic Committee (IOC) flag when the games kick off in August 2016.

The latest Pulse Asia survey (conducted from February 15 to 20) shows Sen. Grace Poe and Vice President Jejomar Binay tied for the lead (26% and 25%, respectively). However, Pulse Asia clarified that Binay is statistically tied with two other presidential candidates: Mayor Rodrigo Duterte and ex-DILG chief Mar Roxas (both with 21%). Sen. Miriam Defensor-Santiago came in last with 3% of the votes.

HBO has finally responded to Manny Pacquiao's controversial anti-LGBT stance. Although the network said they are obligated to air Pacquiao's upcoming April bout with Timothy Bradley, they "felt it important" to express their stand on the issue. "We consider them insensitive, offensive and deplorable. HBO has been a proud home to many LGBT stories and couldn't approach this event without clearly voicing our opinion," said HBO in a statement.

Whether it's roasted, fried or steamed, it's hard to resist a tasty plate of chicken. We round up 10 delicious chicken dishes you need to try.

10. 10 Things You Should Know About Ang Kiukok

A retrospective exhibition featuring National Artist Ang Kiukok is ongoing at the Ayala Museum! Before you marvel at his technique and distinct style, get to know the man behind the prize-winning works.