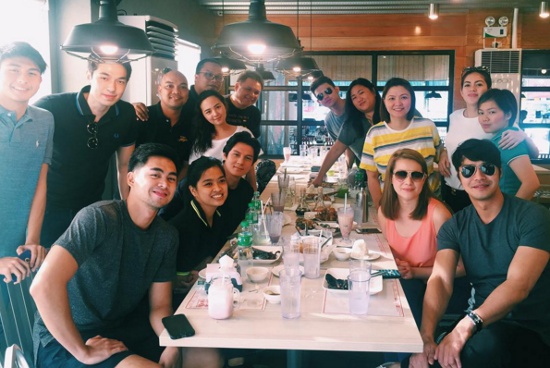 Photos of Bea Alonzo and Zanjoe Marudo hanging out have surfaced on the Internet. The former couple were part of a small get-together with friends in an unnamed Quezon City restaurant. They were accompanied by other celebrities like Shaina Magdayao, Inigo Pascual, and Joseph Marco. Alonzo and Marudo were a couple for over five years; the latter confirmed their split about two months ago.

TV and film director Francis Pasion has passed away this past weekend due to a heart attack. The 38-year-old was found dead at his home in Quezon City on Sunday, March 6. Pasion directed plenty of teleseryes for ABS-CBN, including On the Wings of Love, Nathaniel, Dyesebel, Princess and I, and My Binondo Girl. He is also known for his indie feature films like Jay in 2008 and Bwaya in 2014.

In a Facebook post over the weekend, veteran actress Vivian Velez tendered her "irrevocable resignation" from the ABS-CBN show, Tubig at Langis. She cited "humiliation" from a fellow actress on the show. In an interview with PEP.ph, she admitted that she was referring to Cristine Reyes, saying, "We shared a designated standby room and she asked me to leave the room because she wants it only for her own. She bangs the doors, shouted at me. She keeps on singing 'Goodbye, Farewell'  in front of my face while we are rehearsing," she said. "She complained to the production staff [about] why they [were] nice to me and she should be the priority all the time. And many other instances of rudeness that [were] uncalled for." She added that her co-stars Isabelle Daza and Zanjoe Marudo had sympathized with her.

4. Italy wants pizza to be recognized by UNESCO

Italy's UNESCO commission has pushed for Neopolitan pizza-making to be recognized by the organization's annual cultural heritage list. The proposal was backed by a worldwide petition with over 850,000 signatures. According to the commission, the art of pizza-making was a "central element of Neapolitan and Italian identity," and should be distinguished from competitors, like New York-style pizza. After a year-long process that will involve 200 countries, the list will be released in 2017.

TGIFridays Glorietta bartender Rizza Umlas was crowned the World's Greatest Bartender at the 25th annual World Bartending Championship in Dallas, Texas. She bested nine other finalists from around the globe, becoming the youngest (and only female) winner of the title.

6. Woman dies after being stuck in elevator for a month

Maintenance workers in Beijing came to repair a malfunctioning elevator in the Xi’an area in the latter part of January. Discovering the elevator wedged between two floors, the workers yelled to check if anyone was inside and proceeded to turn off the power supply. The crew then left and returned in March, only to find the body of a 43-year-old Chinese woman inside the elevator. There were scratch marks inside and the deceased was determined to have died of dehydration. Police have made arrests for involuntary manslaughter.

In celebration of International Women's Day on Tuesday, March 8, women will be getting free MRT and LRT-2 rides in two batches: From 7 a.m. to 9 a.m., and 5 p.m. to 7 p.m. The promo is in partnership between the Department of Transportation and Communication, and the Philippine Commission on Women.

Promising not to employ the "teka-teka" mindset in releasing emergency funds, presidential aspirant Jejomar Binay vowed that disaster victims would have quicker access to help. Binay’s camp asserts that unlike the present administration and during presidential candidate Mar Roxas’ time as the Department of the Interior and Local Government head, Binay would make sure that funds for rehabilitation projects are prepared even before calamities strike. Joey Salgado of the United Nationalist Alliance said, “Binay will not wait until the next campaign season to spend for programs which should have been finished years ago.”

Fill your month with a good dose of culture. We round up 10 art exhibits around the Metro that you shouldn't miss this March.

Summer is right around the corner! We don't know about you, but we're already itching to head to the beach, and this is giving us more reason to do just that: We show you the beauty of Sicogon Island in Carles, Iloilo.