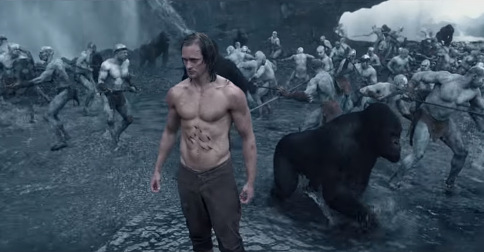 1. Watch the new trailer of the live-action Legend of Tarzan

Warner Bros. has released a new, full-length trailer of its live-action adaptation of Legend of Tarzan. The trailer touches on Tarzan's origin story, but mostly focuses on his return to the jungle after living in the city with his wife, Jane. The film stars Alexander Skarsgård, Margot Robbie, Christoph Waltz, Samuel L. Jackson, and Djimon Hounsou. It hits theaters July 1 and is helmed by Harry Potter director David Yates.

Spotify has struck a deal with the U.S.'s National Music Publishers Association three months after the former was hit with two lawsuits over alleged copyright infringement. The music streaming website will start paying music publishers U.S. $16 million in what it calls "unmatched works," or songs in its catalog that are missing "certain ownership information." In exchange, music publishers must agree not to sue Spotify for copyright infringement.

4. This nifty website can help you remember the name of a film

Have you ever tried to remember the title of a movie, but all you can recall are certain scenes or actors? Whatismymovie? is a Finnish-developed website that promises to solve that problem. Users can enter certain descriptions into its search engine such as "Comedy in Hawaii" or "Sean Connery in red pants" and the website will come up with several movie title suggestions.

Festivities for Earth Hour kick off at 7 p.m. at the Quezon City Memorial Circle, with the World Wide Fund For Nature-Philippines Ambassadors Marc Nelson, Rovilson Fernandez, Mikee Cojuangco-Jaworski, and a host of other personalities joining in until 10 p.m. Called “Pedal for the Planet,” part of the event includes volunteers pedaling on 10 stationary bamboo bikes to light up an LED map of the Phiilippines. The actual Earth Hour is at 8:30 p.m. and will be observed in 178 countries and territories.

Presidentiable Grace Poe paid a visit to and brought flowers to the tomb of sugar heiress Tessie Valencia, who had been the one to bring Poe to Fernando Poe, Jr. and Susan Roces. Grace Poe was found at the Jaro Cathedral in Iloilo City when she was just a baby. A woman called Sayong Militar raised her for two years before giving her to Valencia, who in turn gave the child to showbiz couple Susan Roces and Fernando Poe Jr. Roces and Poe were in the area as part of the latter's campaign trail.

7. Marcos: Santiago’s health should be her priority

Following presidential candidate Sen. Miriam Defensor-Santiago’s announcement to skip the second presidential debate on March 20, running mate and vice presidential candidate Bongbong Marcos said that Santiago’s health should come first even if they are in the middle of campaign season, reported Inquirer.net. “We had planned to be together during the campaign. That was always the original plan. But I suppose her health issues have overtaken her and she has just to attend to that. And I think that she would be able to overcome this new obstacle and she will be joining us in the campaign soon enough,” Marcos said. He also related that while he prefers to campaign with Santiago, campaigning individually seems to be the “trend” for this election.

Pilgrims and mountaineers planning to scale the mountains during Holy Week are informed that the activity is illegal. “Mounts Banahaw and San Cristobal are still closed...for the next three years,” Salud Pangan of the Department of Environment and Natural Resources said. “Any plans to climb and reach the mountain peak is unauthorized and therefore, illegal.”  She also added, “I’m warning pilgrims and nature trippers that if someone shows [them] a permit from my office, most likely it is a fake document with my forged signature.” However, the villages of Sta. Lucia and Kinabuhayan in Dolores town in Quezon province, which is located at the foot of Banahaw, will be open to the public.

Looking for something new to do? Next time you plan a day out, head to Escolta for a dose of art, culture, history, and other activities.

There are so many options out there besides the classic black bikini! Update your wardrobe with any of the two-piece swimsuits we've rounded up for you.