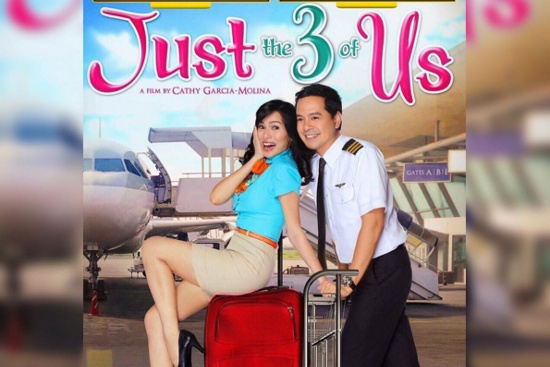 Star Cinema has unveiled the official poster for the highly anticipated team-up of John Lloyd Cruz and Jennylyn Mercado. The rom-com, Just the 3 of Us, chronicles the story of a pilot (Cruz) and an airline stewardess (Mercado) who has a huge crush on the former. Directed by Cathy Garcia-Molina, it hits theaters on April 27.

A recent Facebook photo of American band Switchfoot performing in Tondo has gone viral. Although it hasn't been officially confirmed, Facebook users said that the performance was intended for a new music video for their upcoming album. The band, who is best known for their song "Dare You To Move," had a free live concert on March 27 at Bonifacio Global City to celebrate Easter Sunday.

3. Batman V Superman is getting an R-rated "Ultimate Cut"

Before you get too excited, it's not coming out in theaters. The R-rated version of the film (which will reportedly include deleted scenes and additional characters) will be released via the film's Bluray and DVD set. It is also rumored that this version will run for three hours, instead of the two and a half hour theatrical release. Warner Bros. is set to announce the release date in a few weeks.

If you're in dire need of a hug but no one is around, this chair by South Korean Lee Eun Kyoung will solve your dilemma. The sofa, dubbed the "Free Hug Sofa," features long arms that can be bent to envelope you in a comforting hug. It also comes in a variety of colors, so you can match it with the rest of your interiors.

5. Deadpool is officially the highest-grossing R-rated film ever

Your favorite foul-mouthed superhero has broken another record. Deadpool is now the highest-grossing R-rated film ever, with earnings at U.S. $746 million worldwide. (It edged out previous record-holder The Matrix Reloaded by about U.S. $4 million.)

6. Mt. Apo fire spreads to 300 hectares of forest and grassland

Eduardo Ragaza, a national park supervisor in Davao Del Sur, has confirmed that the Mt. Apo fire has spread to 300 hectares of forest and grassland. He added that the fire could still spread to other areas, though it has slowed down due to "moisture at the mountain." The fire in Mt. Apo started Saturday afternoon, March 26, at the peak and spread downhill towards the Kapatagan area in Davao del Sur.

7. About 44 million ballots printed a month before deadline

The camp of presidential candidate Mar Roxas has come to the defense of a comic book that features him rescuing people to safety during Typhoon Yolanda's onslaught. The comic claimed that Roxas was in Tacloban on the eve of the storm, which Tacloban-based writer Lottie Salarda denied. "He never knew that the storm will hit as early as 5 a.m. Tapos ngayon hero siya? Wala siyang alam," she said. In a statement, Roxas' camp said the comic was created by his supporters and that while the comic "dramatized" the events of Yolanda, the Liberal Party stands by what he reportedly did in Tacloban.

Love your furry friend? We round up a handy list of trusted places that will cater to your pet's needs in Manila, from veterinarians to adoption centers and everything in between.

10. 10 Art Memes For Every Manila Situation

To celebrate classic art, the wonders of social media, and well...just being Pinoy, we put our own relatable, Snapchat spin on these 10 paintings.