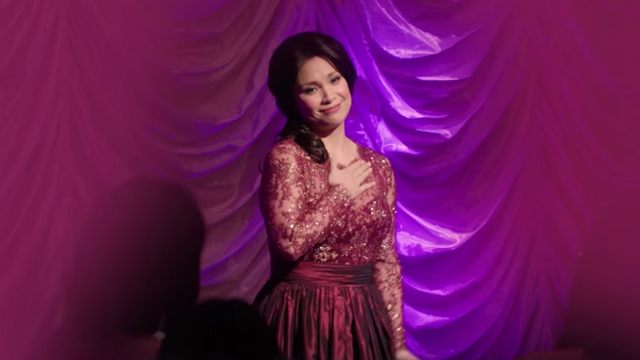 A trailer for the upcoming season finale of The CW's Crazy Ex-Girlfriend features an appearance from Lea Salonga, who will reportedly play the aunt of the lead male character, Josh (played by Filipino actor Vincent Rodriguez III). The show's co-creator and star, Rachel Bloom, confirmed that Salonga will perform a song in the musical-comedy. The season finale will air in the U.S. on April 18.

2. Ben Affleck is starring and directing in a solo Batman movie

Warner Bros. has confirmed that a standalone Batman movie is pushing through, and it will be helmed by its star, Ben Affleck. The studio's chairman and CEO Kevin Tsujihara credited the box-office success of Batman V Superman: Dawn of Justice, which earned nearly U.S. $800 million worldwide, despite being panned by critics. A release date for the solo Batman movie has yet to be announced.

3. Here's your first look at Benedict Cumberbatch as Doctor Strange

Marvel has finally released the first trailer for the upcoming Doctor Strange movie, the studio's second biggest superhero flick for 2016. Its star, Benedict Cumberbatch, dropped by Jimmy Kimmel Live to give fans a look into the film. Spoiler: It gets very trippy!

4. Ian Veneracion is doing another movie

In an interview with PEP.ph, actor Ian Veneracion confirmed that a new movie with Star Cinema is already in the works, but he declined to reveal any further details. Fans have speculated that the new project will involve his current leading lady, Jodi Sta. Maria, who worked with him in Pangako Sa 'Yo and All You Need is Pag-Ibig.

If a film were to be made about her, senatorial candidate Leila De Lima has an answer for who should portray her: Dawn Zulueta. The former justice secretary also came up with a title for the biographical film, calling it "The Lady Justice." “Gusto kong mag-focus [ang film] sa nagawa ko, ‘yong paglaki ko, and then ‘yong nagawa ko. Paano ako pinalaki ng parents ko, at paano ako nagtrabaho sa mga ibinigay sa aking trabaho,” she said.

6. COMELEC will no longer use the Manila Hotel as venue for canvassing center

Instead, the Commission on Elections will once again use the Philippine International Convention Center as the venue for the national canvassing in the May 9 polls. Commission on Elections (COMELEC) Chairman Andres Bautista had suggested the Manila Hotel as the site for national canvassing, but different sectors objected, as the COMELEC was also criticized for the plan to purchase bib vests—a project worth P26.5 million.

Vice presidential candidate Leni Robredo was a member of the Sentro ng Alternatibong Lingap Panligal or Saligan, which served as the Sumilao farmers legal counsel. If the farmers had left their homes for Metro Manila in 2007 to settle their claim to their ancestral land, they repeat their journey on April 15, but this time to lend Robredo their support. “Leni has helped them in their quest for land. Now the farmers thought it is time to do something for her,” said Soc Banzuela, the national coordinator of Pakisama, one of the organizers of the Sumilao farmers. The cross country caravan-march will last for 23 days, starting on April 15 at Sumilao, Bukidnon and ending on May 7 at the Quezon Memorial Circle.

9. 10 New Restaurants to Try This April

Stumped on where to eat? If you're on the lookout for something new, we round up 10 fresh restaurants for you to check out this month.

10. Choose Your Illusion: Mark Justiniani at the UP Vargas Museum

He wowed crowds during Art Fair Philippines 2016 in February, and now the public has another chance to catch a glimpse of Mark Justiniani’s three-dimensional artwork, “Allegoria,” plus other pieces at his exhibit opening today, April 13.