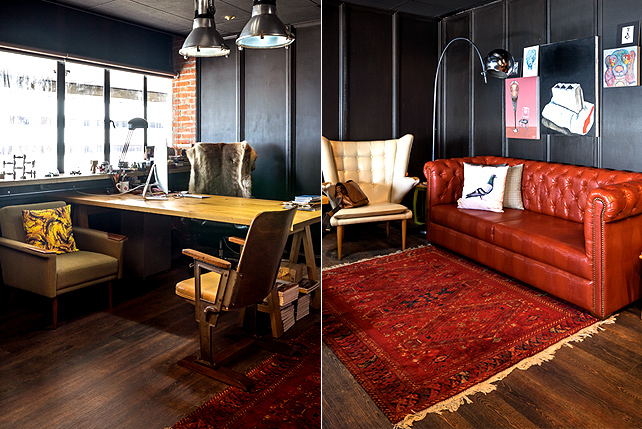 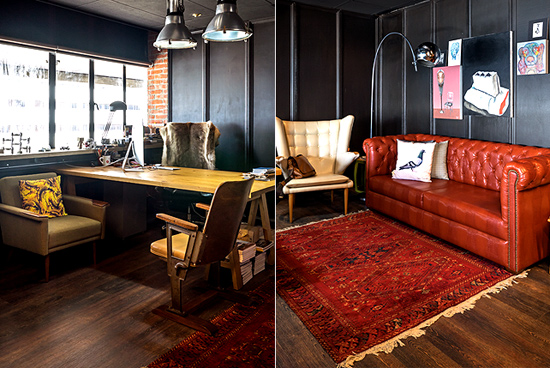 (SPOT.ph) Even before mid-century modern furniture dominated the design scene on this side of the world, Space Encounters was already carving out its little niche in the Ortigas neighborhood. Selling carefully curated products amid restored vintage pieces and sleek chairs, the store was the 2009 offshoot of designer Wilmer Lopez’s practice, which brought the same polished mid-century aesthetic to commercial and residential interior spaces.

The company has grown and expanded over the years, and in March 2016, it secured a 150-square meter space next door to its very first office. Retaining its mid-century look and playing on the space theme of the group’s name, the new office space showcases the best of what the team does—consistent branding, a refined take on mid-century design through finishes and furniture, and thoughtful details that add splashes of whimsy and smart quirkiness everywhere. 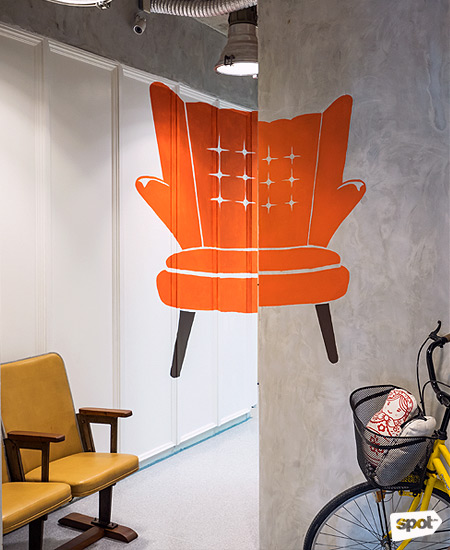 A fun mural of Space Encounters’ ubiquitous Papa Bear chair introduces you to the space. “We held a contest among our employees for the lobby design,” says Thor Balanon, Space Encounters’ VP for marketing and operations. There were three pitches—one based on crafts, another hinged on the “Humans of Space Encounters” concept, and the winning design was centered on the philosophy, “It’s all a matter of perspective.”

“This embodies our direction. We like to say that creativity is looking at things in a different way,” adds Thor.

A row of vintage cinema chairs rescued from an old cinema from Laguna are lined up against delicate paneling along the walls. The classic finishing were remnants from the space’s old occupant, a resin company. Wilmer decided to retain them and give them a wash of white paint to keep things bright and updated. 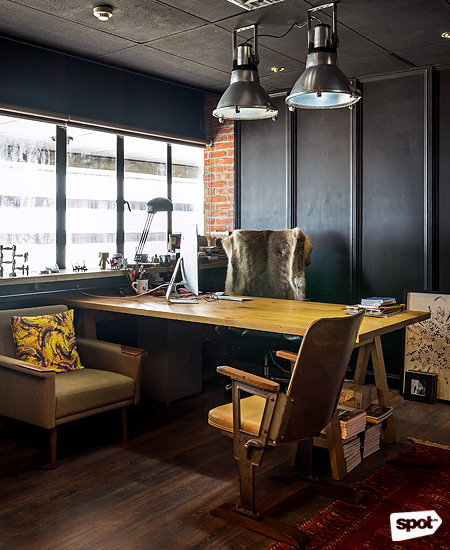 In keeping with the space theme, Wilmer’s private office is labeled “Fleet Admiral.” Kept in black tones and hushed colors, the office isn’t just a functional space for meetings and actual work, but a showcase for many of Wilmer’s designs. Favorite pieces in the space are, again, the cinema chair, which is now hinged onto a wooden base (in the cinema, it was secured onto the flooring) and Wilmer’s favorite Chesterfield tufted sofa—a one-off piece. 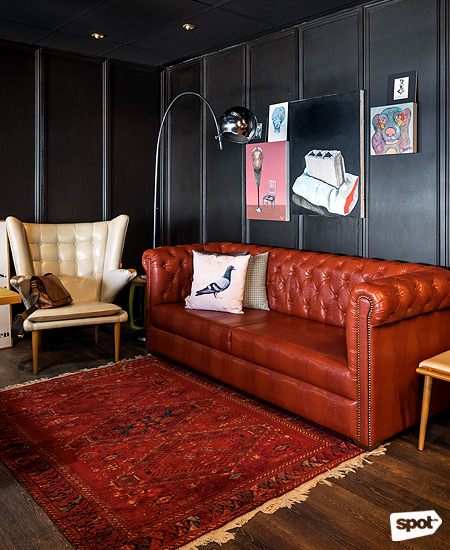 While the dim space is easily a foil to the bright white washes of the lobby, it still features the same fun, toy collection scattered all throughout the office. Brightening up the walls are distinct pieces sourced from Art in the Park. Two paintings that pop out are those of chairs made by artist Lui Manaig. 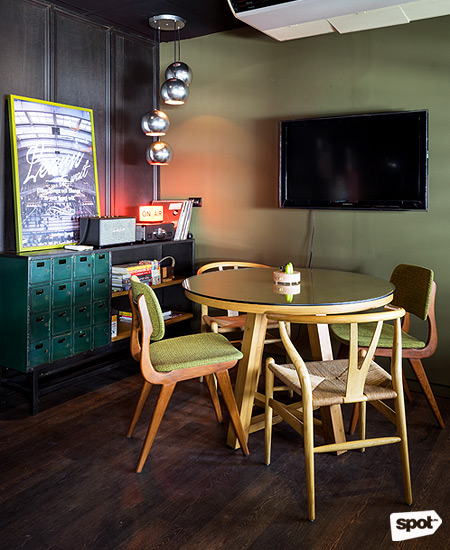 A salvaged collection of PO boxes from the Ortigas post office makes up a reworked shelving unit. “We found them lying on the street and asked if we could buy all of them,” Wilmer explains. The boxes were about to be sold off by the kilo for disposal until they were able to purchase them. The units still keep their original color and are found in other spaces of the office. 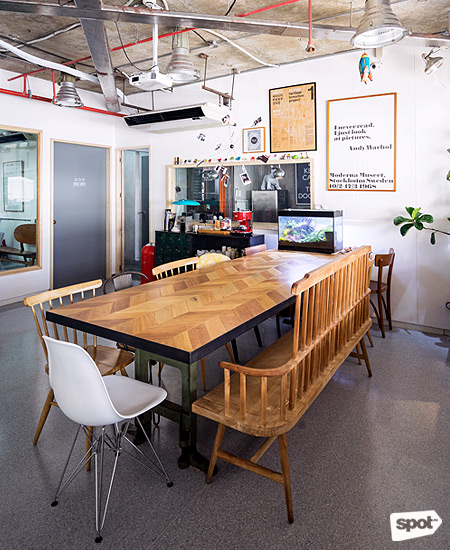 The social hub of the Space Encounters’ tight ship lies in the conference area. A multi-purpose space used for everything from meetings to meals, drinks to film-viewing, the airy room is dotted with personal touches like a hanging clip installment decorated with Instax photos, fun space and travel toys and décor, as well as DIY terrariums mixed with dinosaur figurines. Wilmer himself toyed around with just the right amount of water and light before coming up with arrangements that work in the environment. 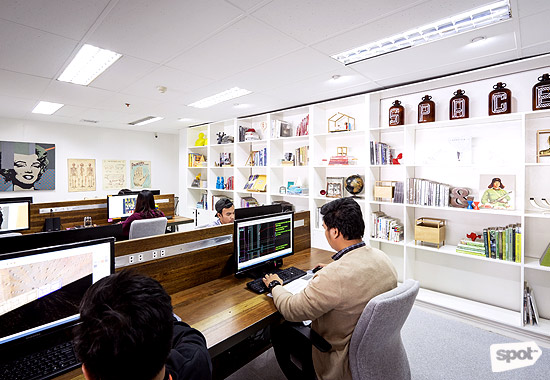 Just beside the Space Deck is the main work area of the operations. Playfully labeled “Space Cadets,” the room holds the work desks plus a library carefully arranged according to color. Aside from the fun graphics that deck the walls, other notable pieces in the area include the solid worktables, whose heavyweight legs are repurposed from old work tables Wilmer found in a factory for fabric milling. The large window allows natural light to filter into the room from the conference area and keeps the entire space illuminated effortlessly. 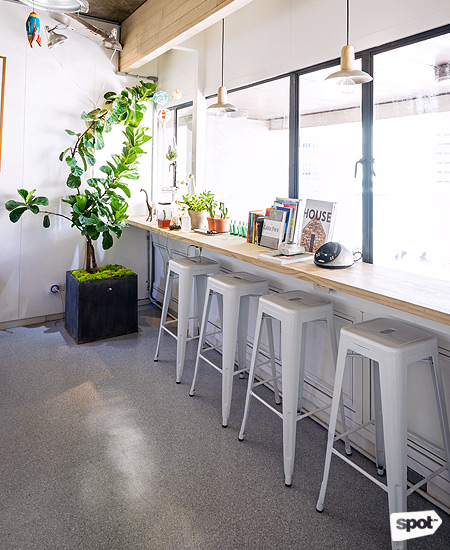 Just behind the conference room is a generously spaced pantry. The space holds a bar area that looks out into the Space Deck through a large window, allowing light to enter through an otherwise dim space. The space, though mostly functional, is again brought alive by little touches—little toys and vintage kitchen containers with a distinct 1970s appeal keep areas that lay mostly behind the scenes still within theme. 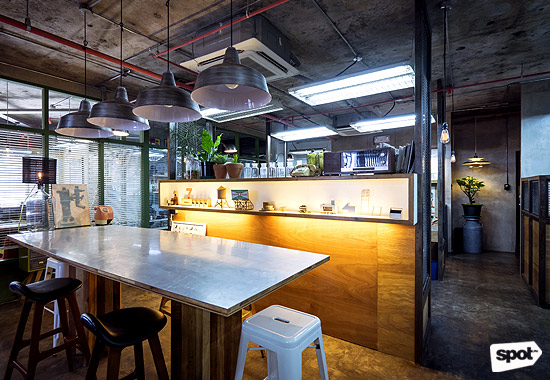 Space Encounters’ first office is still fully operational and bustling, despite the acquisition of the brand new space. Wilmer decided to keep the bare ceilings and floor, and dressed everything up with industrial bricks and metal doors. The central work area is mostly open in layout. Despite the hard-edged materials used to decorate the space, nooks and crannies are softened by vintage accessories such as old telephones and typewriters. The office is rich in texture—everywhere you look, you’ll find a spot that carries strong visual impact, whether it’s a row of scale models, or a wall covered in black and white photos. 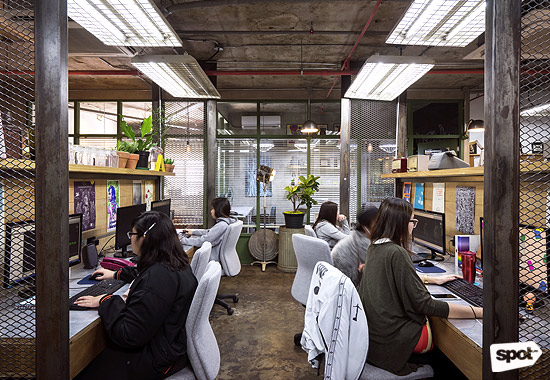 Private offices are walled off from the main workspace with glass partitions that still retain the industrial, New York loft look found all throughout the area. Natural light is still an important factor in the makeup of the office, and the partitions allow for illumination to filter through. 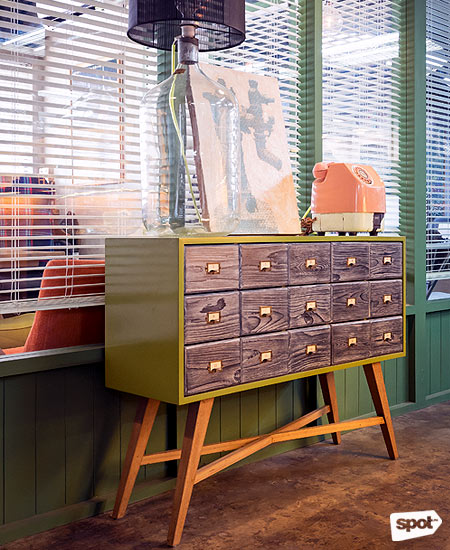 The thoughtfully placed details against the backdrop of Space Encounters’ pieces are a testament to the many layers found in the team’s approach to design. Both offices are an extension of Space Encounters’ shop in terms of the furniture that fills it, but the office is also a living and breathing space that encourages everyone on the team to push the boundaries of their creativity.

Workspaces Design Cool Office Cool Offices Space Encounters
Your Guide to Thriving in This Strange New World
Staying
In? What to watch, what to eat, and where to shop from home
OR
Heading
Out? What you need to know to stay safe when heading out