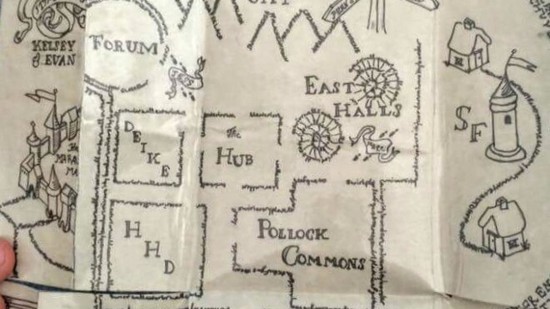 1. This guy proposed to his girlfriend with a Marauder's Map

No, we don't mean he bought a Marauder's Map and stuck a ring in it. A guy named Evan Onuskanych was inspired by a trip to the Wizarding World of Harry Potter with his girlfriend, and decided to propose to her with a customized version of the magical map. The illustrations include landmarks of their entire relationship, including the high school where they met, the coffee shop from their first date, and the spot where their footprints meet and he asks her to marry him. Swoon!

The tech giant's own Safe Browsing Site Status report reportedly warned users that the Google.com website is "partially dangerous" and that it may install malware or try to steal personal information. The program detects "unsafe sites" and warns users via their web browsers or on Google Search. As of writing, however, it seems Google has already lifted the unsafe tag for their own website.

Yes, you read that right, and yes, we mean the convenience store. U.S. Republican presidential candidate Donald Trump made the mix-up during a speech in Buffalo, New York, where he was quoted saying, "I was down there and I watched our police and our firemen down at 7/11, down at the World Trade Center right after it came down." He didn't correct himself, by the way. Trump won the Republican presidential primary in New York, while Democratic hopeful Hilary Clinton also triumphed in the state.

After five years of placing lotto bets, a 75-year-old pensioner hit the jackpot by using the lucky pick feature for a shot at the correct number combination. His P120-worth ticket got him the P22-million jackpot prize in the 6/42 Lotto draw on April 7. Upon claiming his prize, he informed the Philippine Charity Sweepstakes Office that he plans to donate some of his winnings to a local church, set aside a portion for his and his wife’s future needs, and give the rest to his children so that they can put up their own businesses.

Along with improvised firearms, cell phones, speakers, and Wi-Fi routers, authorities also found four sugar gliders—animals endemic to Australia and Indonesia—during a raid at the New Bilibid Prison on Tuesday, April 19. According to the New Bilibid Prison director, Supt. Richard Schwarzkopf, the items might have been smuggled into the compound through garbage trucks, ambulances, or vehicles owned by catering services.

The construction of the MRT Line 7 officially begins today, April 20, with a groundbreaking ceremony attended by President Noynoy Aquino. The new line is meant to connect Bulacan to the MRT-3 and the LRT-1, and is planned to be operational in four years. Expected to shorten travel time from three and a half hours to one hour, the MRT-7 will initially accommodate 350,000 daily passengers. With upgrades, it is expected to accommodate 800,000 passengers per day.

8. Binay leaves it to the public to weigh in on Duterte’s psychological report

Used as basis for the annulment of Rodrigo Duterte and Elizabeth Zimmerman’s marriage in 2000, a psychological report indicated that the presidentiable has a “pervasive tendency to demean, humiliate others, and violate their rights and feelings,” and has “difficulty controlling his urges and emotions.” Vice President Binay, who says it's "high time" for candidates to undergo medical and psychological tests, suggests that it's up to the voting public to decide on Duterte’s “physical and mental case.”

Nothing says summer like sun, sand, and colorful trends! This season, we show you how you can rock the fun flamingo trend...whether it's with a cool backpack or a pair of kicks.

Been to a few? Discover more! Not only do you learn about the place’s people, history, and cuisine, you get to have fun in these once-a-year festivals, too!