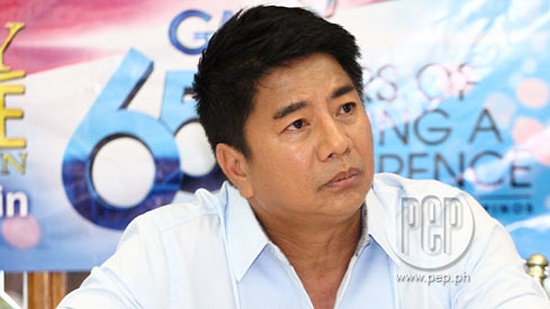 Duterte maintains lead in new Pulse Asia poll, Just the 3 of Us gets new release date, and more.

In a resolution filed on April 11, the Court of Appeals ordered TV host Willie Revillame's arrest over his child abuse case. (Remember Jan-Jan's infamous dancing incident in 2011? Yes, that one.) The Court of Appeals (CA) junked Revillame's motion for reconsideration, and upheld the previous decision of the Quezon City Regional Trial Court, who issued a warrant of arrest for Revillame in 2013. "As there is probable cause for the petitioner’s commission of a crime, his arrest and arraignment should now ensue so that this case may properly proceed to trial," said the CA.

Star Cinema's latest offering has been moved to a later release date. Just the 3 of Us, which stars John Lloyd Cruz and Jennylyn Mercado, was originally set for April 27, but was moved to May 4 (the same release date of the JaDine-starrer, This Time). The film is directed by Cathy Garcia-Molina, and also stars Joel Torre, Joem Bascon, and Maria Isabel Lopez.

The latest X-Men installment is right around the corner, and its brand-new (and last) full trailer features some very familiar claws. Although the trailer hinted at Wolverine's appearance, it is still unclear how huge his role would be for the film. The movie opens in theaters in May.

4. Microsoft releases new iOS keyboard that will make it easier to type with one hand

Microsoft has unveiled a new keyboard app called Word Flow, which promises to make typing with one hand on a large iPhone much easier. The app, which is only available in the U.S. for now, includes an "arc" feature that enables easier typing for users. It also comes with a predictive feature, as well as the ability to swipe between letters.

If you're a huge Star Wars fan, you should probably book a flight to London in June. The Fork Awakens is a pop-up restaurant that brings together witty Star Wars references and food, with dishes aptly titled "Tatooine Muddy Soup with Alderaan" and "Mini Banthaburgers." The restaurant opens on June 23 for six days, and dinner is reportedly U.S. $60 per person.

Alexander McQueen’s label is being sued by a bridal designer who claims that the former’s creative director Sarah Burton "copied" her ideas for the wedding dress worn by Kate Middleton that were sent for consideration almost five years ago. The designer, Christine Kendall, said that Middleton's final gown "incorporated" some of the sketches she submitted, but the Duchess of Cambridge's spokesperson denied her claims. Meanwhile, a spokesperson for Alexander McQueen dismissed the claims as "nonsense" and "ridiculous."

On Monday, Canada's Prime Minister Justin Trudeau condemned the execution of a Canadian hostage by Abu Sayyaf militants. The hostage was 68-year-old John Ridsdel, who was captured alongside three other people in September 2015 while on vacation. It was reported that a severed head was found on Monday, five hours after the expiry of a ransom deadline set by militants who had threatened to execute one of four captives. (The initial demand was P1 billion each for the detainees.) "This was an act of cold-blooded murder and responsibility rests squarely with the terrorist group who took him hostage," Trudeau said. "The government of Canada is committed to working with the government of the Philippines and international partners to pursue those responsible for this heinous act."

Whether you prefer your fries thin or thick, crispy or soggy, salty or spicy, we round up the best restaurant fries from all over the Metro. Get ready to dig in!

10. 10 Velcro Sneakers That Will Bring Back Your Childhood

Who says velcro sneakers are only meant for the playground? Velcro straps are making a big comeback this 2016, and we found 10 sneakers that will add a dash of youthful fun to your wardrobe.