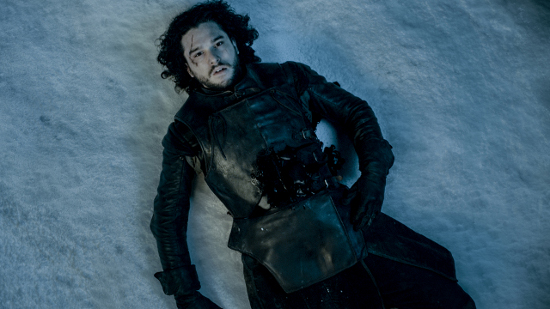 1. Thrones star Kit Harington apologizes for "lying to everyone"

In an interview with Entertainment Weekly, Kit Harington (best known for his role as Game of Thrones fan-favorite, Jon Snow) apologized for misleading fans about his character's fake death. "I'd like to say sorry for lying to everyone. I’m glad that people were upset that he died. I think my biggest fear was that people were not going to care. Or it would just be, 'Fine, Jon Snow’s dead,'" he said. "But it seems like people had a, similar to the Red Wedding episode, kind of grief about it. Which means something I’m doing—or the show is doing—is right."

2. Paulo Avelino and EJ Falcon to star in new show together

Paulo Avelino and EJ Falcon are returning to TV after the successful run of their shows, Bridges of Love and Pasion de Amor, respectively. The new show, The Promise of Forever, will feature sexy star and ABS-CBN newcomer Ritz Azul as the leading lady. Plot details have yet to be revealed, but it will be helmed by directors Darnel Villaflor (Nathaniel) and Hannah Espia (Transit).

3. Space Jam 2 is happening, and it stars LeBron James

Justin Lin, who is best known for his work in the Fast & Furious movies, is reportedly slated to direct the upcoming sequel to the 1996 hit Space Jam. Rumors of a sequel have been circulating for awhile now, and it looks like Cleveland Cavaliers forward LeBron James will star. James has yet to confirm the reports.

It's a lineup right out of a music fan's dreams. Classic rock icons Paul McCartney, Bob Dylan, Neil Young, the Rolling Stones, and The Who are slated to play in a three-day concert in October. The concert will be arranged by the folks behind Coachella, marking the first time all musical acts have shared a lineup. The show is slated for October 7 to 9 in the same venue as Coachella.

5. This music video series will let you create your own mashups

If you've ever wanted to try your hand at creating musical mashups, this interactive music video series can help. Each video in Clash Up's eight-part series will feature a group of artists across different genres to bring together, and there are a total of 81 possible musical combinations to try out. The videos also give users a little taste of music history, with new episodes released every Monday.

6. Santiago: PH not ready for a Duterte presidency

In an interview with Inquirer.net, Sen. Miriam Defensor-Santiago said that the Philippines is "not yet ready" for a Duterte presidency, saying, "Some of his statements make us doubt his allegiance to the rule of law." She also commented on his tough stance on criminality, saying, "Merong mga [naniniwalang] bayani siya kasi kaagad ay susuntukin niya 'yong kalaban niya. Alam naman nating mali 'yon, pero wala tayong legal literacy kasi. 'Di man lang natin alam anong tinatawag na rule of law. Rule of law means the law applies to everybody whatever his standing in the community."

Rachel Angeli Miranda, a graduate of the UP College of Law, topped the 2015 Bar Examinations with a grade of 87.40%. Of the 6,600 people who took the exams in 2015, a total of 1,731 passed, garnering a 26.21% passing rate. The Top 10 placers include four students from UP, alongside University of San Carlos, Ateneo de Manila University, and San Beda College in Manila.

Mar Roxas' camp has dared Davao City Mayor Rodrigo Duterte to stop his supporters from spreading fake endorsements online. "We challenge Mayor Duterte to show the discipline he says he will bring to the Philippines. He can start with his supporters," said Akbayan Rep. Barry Gutierrez. Previous fake endorsements that have gone viral online include Pope Francis, U.S. President Barack Obama, and Iglesia Ni Cristo.

This Mother's Day, take your mom somewhere extra special! We round up 10 restaurants that will cater to any mother out there, from the cool mom to the totally traditional mom.

If going through your social media feed feels exhausting lately, you're not alone. Here are 10 election-related posts that we're tired of seeing. All the time.