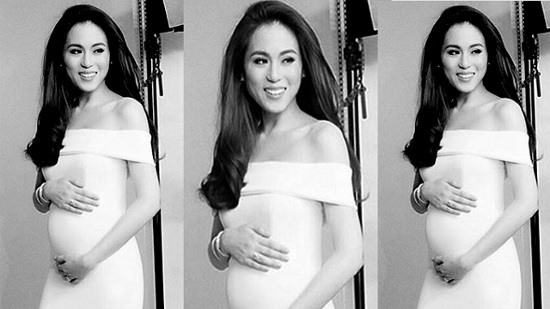 Stylist Kimi Yap took to her Instagram account to post a sneak peek of Toni Gonzaga's upcoming maternity shoot. It is still unclear, however, when and where all the photos will be released. Gonzaga confirmed her pregnancy on ASAP on April 17, and promised that she will remain visible on TV for the coming months. "Medyo we will just take it slow this time. I really just want to enjoy the moment," she said.

2. Channing Tatum's new interview will make you love him more

Carly Fleischmann, a young woman diagnosed with severe autism who communicates by typing on a computer, recently launched her YouTube web show with her first guest star, Channing Tatum. She charmed the Magic Mike star with questions about his career, personal life, and even the challenges of being viewed as a Hollywood hunk. "I find it hard to make people take me serious at all, ever," he admitted.

3. Frozen fans want Elsa to have a girlfriend

A Twitter campaign has been launched demanding that Frozen's Queen Elsa have her own lady-love. The hashtag, #GiveElsaAGirlfriend, quickly trended on the social media site, with LGBT fans showing their support for the change. So far, Disney has yet to respond to the petition.

4.'90s cult classic The Craft is getting a sequel

The 1996 cult classic The Craft is getting a witchy sequel! Douglas Wick, the producer of the original and upcoming film, confirmed that the sequel will pick up 20 years later. It's worth noting, however, that the film's original stars (Neve Campbell, Fairuza Balk, Rachel True, and Robin Tunney) have yet to confirm their return. "There will be callbacks to the original movie, so you will see there is a connection between what happened in the days of The Craft, and how these young women come across this magic many years later," he explained.

A 10-year-old Finnish boy named Jani was paid U.S. $10,000 for reporting a security flaw in Instagram by which hackers could delete comments on any posted photos. To prove his claims, which he told a local paper, Facebook created a test account in February and had Jani hack into Instagram. The U.S. $10,000 was part of the company’s bug bounty program.

Ted Cruz bowed out of the Republican presidential race on Tuesday, May 3 after he was crushed by Donald Trump in Indiana. This means the controversial real estate mogul can now call dibs on the Republican nomination. Cruz said he was proud of his campaign and his "stand for conservative principles," but he has yet to announce whether he would pledge his support to Trump.

In a Wednesday interview with ANC's Headstart, Rodrigo Duterte's lawyer, Salvador Panelo, said there was "nothing wrong" in receiving lavish gifts from influential personalities, "especially" during special occasions. His statement comes after Duterte admitted to being given ownership of property from Pastor Apollo Quiboloy, the head of the Davao-based religious group, Kingdom of Jesus Christ the Name Above Every Name. Duterte's spokesperson, Peter Laviña, also earlier confirmed that the mayor has been using Quiboloy's private jet and helicopter.

In the latest Pulse Asia survey conducted from April 26 to 29, Camarines Sur Rep. Leni Robredo surged past Sen. Bongbong Marcos among the candidates for vice president. Robredo scored a rating of 30%, two points ahead of Marcos, but remained statistically tied. Robredo's ratings rose by four points from the last survey, while Marcos dropped three points.

These days, dating is so complicated that it probably makes you yearn for the simpler times of reto and telebabad. Here are 10 dating problems that none of us experienced 10 years ago.

Looking to spoil and pamper mom this Mother's Day weekend? We round up a nifty list of sumptuous feasts and royal treatments that your mom would love on her special day.