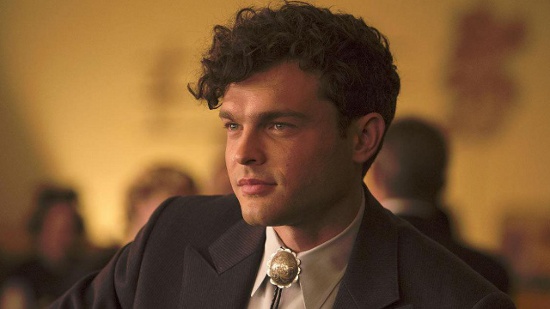 It's official: Star Wars has cast Hail Caesar! breakout star Alden Ehrenreich as the young Han Solo in an upcoming standalone film about the popular character. Directed by Phil Lord and Christopher Miller (The LEGO Movie, 21 Jump Street), the new movie is currently in the pre-production stages. Prior to Ehrenreich (who is now in negotiations), other possible names to take on the role included Kingsman's Taron Egerton and Transformers: Age of Extinction's Jack Reynor.

Viva Films' This Time, which stars James Reid and Nadine Lustre, reportedly earned P15 million on its first day of release. Directed by Nuel Naval, it tells the story of a pair of lovestruck teens who only see each other during the summer. Its box-office rival, Star Cinema's Just The 3 of Us (starring John Lloyd Cruz and Jennylyn Mercado), earned P16 million on the same day.

In an Instagram post on Friday, May 6, Mariel Rodriguez announced that she will no longer be supporting Camarines Sur Rep. Leni Robredo as vice president. "Because of the black propaganda (though I believe she has a good heart), I have decided to change my vice president. It's not her...it's her party," she wrote. However, she didn't disclose which candidate she will be supporting in Robredo's place. She also added that it was her husband, Robin Padilla, who "helped" her change her mind.

Justin Timberlake has dropped new music! The track, Can't Stop the Feeling, is his first solo song in almost three years, and will be part of the upcoming animated film, Trolls. He has also confirmed that he's working on a new studi0 album with Pharrell, Timbaland, and Little Big Town. You can buy the song via iTunes or stream it via Spotify.

5. Would you try food from 3D-printed vending machines?

A Finnish company called VTT Technical Research Centre is investing in the development of high-tech vending machines that can provide food through 3D printing. "3D printing technology will enable the layer-by-layer manufacture of various structures, from crispy to soft gels that produce a distinctive mouthfeel," said the website. A release date has yet to be announced.

6. Krispy Kreme is opening an ATM that serves Nutella-filled donuts

Krispy Kreme U.K. is reportedly unveiling a pop-up ATM machine that dispenses Nutella-filled donuts (each priced at £2) to customers from May 9 to 21. All proceeds from the machine will go the U.K.'s Teenage Cancer Trust. Before you get too excited, however, there's still no word on whether it will be expanding to Krispy Kreme branches around the world.

On Friday, May 6, COMELEC spokesman James Jimenez said that the airing of political ads against a candidate is not against the law. "Partisan political activity is defined specifically as any activity which is in favor of or against a candidate. So an ad can be for someone or against someone," he said. His statement came after a controversial ad targeting Rodrigo Duterte was aired (reportedly paid for by Sen. Antonio Trillanes IV). Jimenez added that the COMELEC doesn't have the power to censor the content of political ads.

8. Trillanes defends use of children in anti-Duterte ad

Meanwhile, Sen. Trillanes has defended the use of children in the political ad he sponsored. In a statement, he questioned why Duterte's supporters were "suddenly concerned" about children when they have not been sensitive about his other public statements. "Yet they laugh every time Duterte cusses and jokes about his penis and rape not realizing that children are listening too? Such hypocrisy, right? Now, that's what the ad is all about too," he said. "The children were purposely used to hammer the message that they should always be part of the consideration in our choice of leaders of the country." He also made it clear that "all pertinent laws" were strictly followed.

9. Crafting Calendar: Workshops for May 2016

It's not too late to get artsy this summer! We round up a list of workshops that will help you unleash your creativity, whether it's stamp making or basic watercolor.

A burrito has to be both bold and filling, with just the right ratio of meat to everything else. If you're looking to satisfy your Latin and South American food cravings, make a beeline for these 10 places.