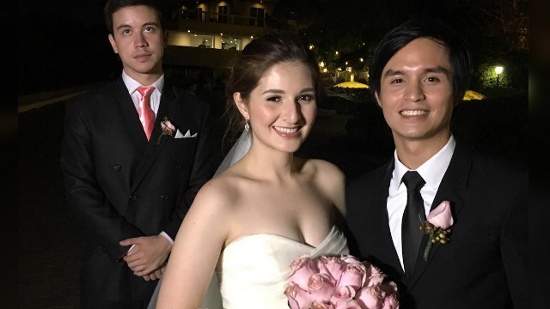 Duterte promises to "control his mouth," Spotify heads to TV, and more.

You probably remember Japoy Lizardo as the cute taekwondo champion who graced the Milo packs you bought when you were a kid. Now, he and his fellow taekwondo athlete Janice Lagman tied the knot in Taal Vista Hotel, Tagaytay. The garden ceremony was attended by close friends and family members, including ABS-CBN actor Arjo Atayde (Lagman's cousin).

It looks like music streaming platform Spotify is expanding their reach. The service is launching 12 original, music-themed "video programs," including a mockumentary series about the EDM scene. The shows will reportedly be a mix of drama, documentaries, and live performances, with episodes ranging from several minutes to 15 minutes long. The new service will be available for free and paid Spotify users in the U.S., U.K., Germany, and Sweden.

Rihanna has launched a global scholarship program that will award students attending college in the U.S. The scholarships are based on financial needs and ranging from U.S. $5,000 to U.S. $50,000 and may be renewed for up to three more years or until they earn their bachelor’s degree. The only requirements are that applicants must be accepted in an accredited U.S. school for the year 2016 to 2017, and that they are residents of Barbados, Brazil, Cuba, Haiti, Guyana, Jamaica, or the U.S.

4. Snapchat now lets you zoom in with just one hand

Here's some good news for Snapchat users out there. The app has been updated with a new feature that lets your camera zoom in without lifting your thumb from the capture button. Before the new update, you could only zoom if you used to two hands: One for the capture button, and the other to zoom in by pinching the screen.

McDonald's branches in San Francisco are reportedly testing garlic-and-parsley fries in four locations throughout the city. Apparently, they're doing so well that they've all sold out in less than two weeks. The fries, which were coated with locally-sourced garlic, olive oil, parmesan cheese, parsley, and salt, were only officially introduced to test locations on May 3. If they were popular enough, the fries variant would be expanded to 250 other McDonald's branches throughout San Francisco.

6. Duterte: "I cannot be bastos because I'm speaking for our country"

In a television program aired early Tuesday, May 10, presumptive president Rodrigo Duterte said that he will do away with the profanities once he steps into office. "I need to control my mouth," he said. "I cannot be bastos because I am speaking for our country. If you are the president of the country, surely you need to be prim and proper...prim and proper na almost maging holy na ako." Meanwhile, his common-law wife Honeylet Avancena said his language was just part of the elections, explaining, "The character that he projected during the campaign was the character very appropriate for the campaign period kasi awayan iyan eh."

On Tuesday, Camarines Sur Rep. Leni Robredo denied a so-called Liberal Party "Plan B plot" to have Duterte impeached so she can take his place. "I've always repeatedly said in the past that the amount of support that I was willing to give Sec. Mar [Roxas] would be the same kind and the same amount of support that I should give whoever wins the presidency." Robredo said. "He deserves my 100% support and this is good for the country. It will not benefit the Filipinos if I do no give him the support he deserves." However, she made it clear that her support for him would not extend to human rights violations.

9. 10 Things Every Beauty Girl Needs on Her Desk

Whether it's an impromptu dinner date or a sudden formal event, we round up a handy list of things every beauty girl needs to have at hand.

Skipping a shopping spree or movie marathon? We show you where to go if you want a dose of art and culture in Manila this month.