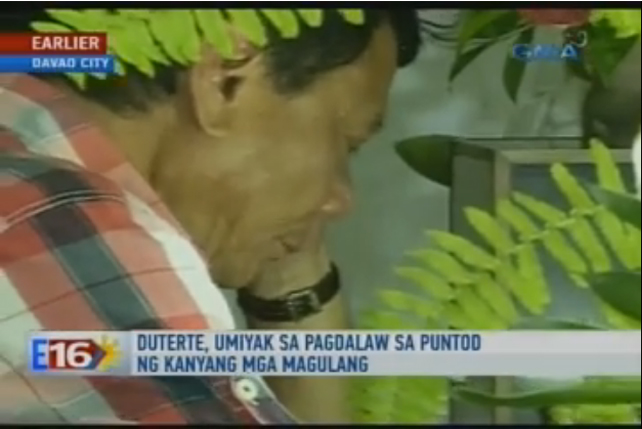 Looks like the tough-talking mayor also has a sensitive side

Rodrigo Duterte let it all out when he visited his parents' tombs in Davao City. 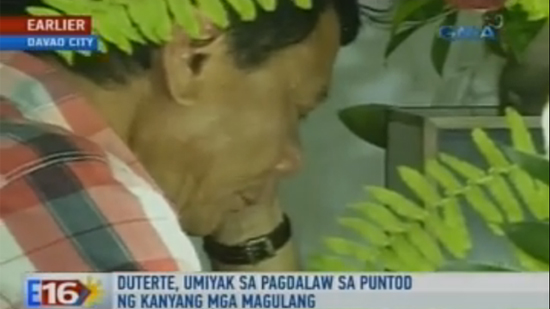 (SPOT.ph) Davao City Mayor Rodrigo Duterte, the presidential aspirant currently leading the race who is also known for his macho, tough-talking image, seems to have a sensitive side after all.

According to a report from GMA News Online, Duterte visited his parents' tombs early Tuesday, May 10 and cried there as he asked for their help on how to lead the country.

The report said the controversial mayor went to the Wireless Cemetery at 3 a.m. to stand before the graves of his parents Vicente and Soledad, before approaching his mother's tomb to cry and ask for her help to lead the Philippines.

As of 10:30 a.m. today, May 10, Duterte still leads the presidential race by more than 6 million votes, based on partial and unofficial results.

Vice presidential aspirant Sen. Antonio Trillanes IV, who has butted heads with the tough-talking mayor through allegations of the latter's secret bank accounts, has also acknowledged Duterte's victory. "I respect the will of the Filipino people. They have spoken clearly and resoundingly that they want Mayor Duterte to be our next president," Trillanes said in a statement.

Elections 2016 Rodrigo Duterte
Your Guide to Thriving in This Strange New World
Staying
In? What to watch, what to eat, and where to shop from home
OR
Heading
Out? What you need to know to stay safe when heading out