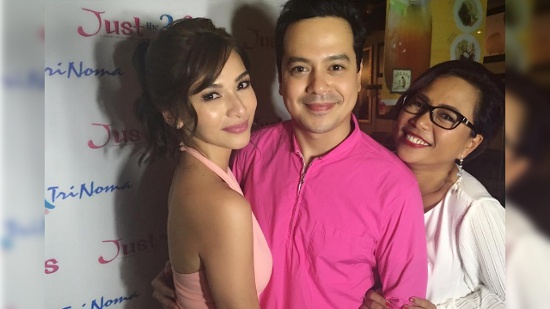 1. Another John Lloyd-Jennylyn movie could happen

Star Cinema's Just the 3 of Us, which stars Jennylyn Mercado and John Lloyd Cruz, has crossed the P100 million mark at the box office after six days. In an interview with ABS-CBN News, director Cathy Garcia-Molina said that another film starring the two leads may already be in the works. "I think parang pinag-uusapan na, mukhang may part two na. Kung hindi man part two, they’d do another film," she said. The current film, which is still showing in theaters, also stars Joel Torre, Maria Isabel Lopez, and Joem Bascon.

In 2005, Sunshine Dizon was part of the original Encantadia cast where she played Pirena, the Sangg're of the fire gem and a main antagonist. A report from 24 Oras confirmed that the actress will be part of the network's upcoming sequel-slash-remake as a new character. The show is slated to premiere late 2016.

3. Ryan Reynolds makes a hilarious appearance in the Honest Trailer for Deadpool

If you love Honest Trailers and the R-rated dark humor of Deadpool, you'll love this video. Its star, Ryan Reynolds even makes an appearance in character and in true Deadpool fashion, he makes fun of the popular video series and curses. A lot.

4. The Exorcist is headed to TV

The 1973 horror classic is getting the TV treatment! Fox is reportedly working on a "modern reinvention" that will be a serialized psychological thriller revolving around two men tackling one family’s case of horrifying demonic possession. A premiere date has yet to be announced, but it will star Geena Davis.

In exciting science news, NASA announced the discovery of over 1,200 new planets. According to astronomers, it's a "step toward finding Earth-like planets." The data was from NASA's Kepler space telescope, and out of 4,302 potential planets, 1,284 have a 99% chance of being a planet. Looks like we're a step closer to Star Wars in real life!

In her first statement since the May 9 election polls, Miriam Defensor-Santiago remained positive and called for her supporters to do the same. "Cheer up, people! Ganiyan lang talaga ang buhay. The night is darkest just before the sun rises," she said in a Facebook post. "As long as we stand for something, all our energy and time are not lost." Santiago previously ran for president in 1992 (losing to Fidel V. Ramos) and 1998 (losing to Joseph Estrada).

On Tuesday, a U.S. official confirmed Washington's willingness to work with Rodrigo Duterte, the presumptive winner of the presidential elections. Earlier, State Department spokesperson Elizabeth Trudeau told reporters, "The United States congratulates the Philippines on holding inclusive and democratic elections. Our two nations have strong and enduring ties based on our shared respect for democratic values. We look forward to continuing those ties."

9. 10 New Restaurants You Need to Try This May

It's a new month, which means there's a new roster of restaurants you need to check out. This month, it's all about coffee shops, comfort food, and more.

No matter where you're from or what your family background is, you are bound to have a memorable Tita in your life. Do you see your future self in one of these Titas?