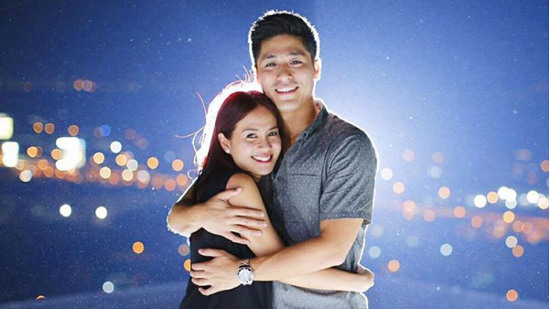 Tabing Ilog alum Kaye Abad made headlines yesterday, May 18, when her boyfriend of two years, Paul Jake Castillo, proposed. Although their friends and family were there with cameras, the surprise birthday-slash-engagement party was documented by Nice Print Photography, who just released the official video of the affair. Prepare a box of tissues!

2. Robert Ludlum's books will get their own cinematic universe

Universal Pictures is reportedly set to bring best-selling author Robert Ludlum's spy thrillers to life with their own cinematic universe. The first book up for an adaptation is The Janson Detective, which will star Dwayne Johnson and will be co-written by Academy Award-winner Akiva Goldsman. No release date has been announced.

3. This app promises to help you lose weight via intercourse

4. Nokia is returning to phones and tablets

After an initial unsuccessful run with Microsoft, Nokia has now sealed a deal with a newly created company called HMD global. The latter is set to produce a line of phones and tablets under Android but with Nokia features. A release date has yet to be announced.

Ella Mae Colbert, a centenarian from South Carolina, attempted to break the Guiness World Record for fastest 100-meter dash by a runner over 100 years old on Tuesday, May 17. She stumbled and fell in front of well-wishers and eventually finished at 46.7 seconds. The oldest competitive sprinter is currently Hidekichi Miyazaki, a 105-year-old Japanese man who completed the 100-meter-dash in 42.22 seconds.

The 12 new members of the Philippine Senate were announced by the Commission on Elections on Thursday afternoon, May 19. The lineup was proclaimed by rank, from the 12th to the first candidate depending on the number of votes in the May 9 elections. The official elected senators are: Franklin Drilon, Joel Villanueva, Vicente Sotto III, Panfilo Lacson, Richard Gordon, Miguel Zubiri, Manny Pacquiao, Risa Hontiveros, Francis Pangilinan, Sherwin Gatchalian, Ralph Recto, and Leila de Lima. Commission on Elections (COMELEC) chairperson Andres Bautista said in his opening remarks that the 2016 election is "probably the most divisive and vicious, and arguably the most efficient." He also added that 2016 had the highest turnout for overseas voters.

Salud Bautista and Michael Bautista of Philrem Service Corporation asked to be excused from the Senate's ongoing investigation into the U.S. $81-million money laundering controversy. In a letter to Sen. Teofisto Guingona III, the Bautista couple claimed that "the answers we have given during said hearings are now being used to support the accusations against us in the above-mentioned cases." The Senate Blue Ribbon Committee is currently on its seventh hearing after taking a break during the election period.

Flight MS804, an EgyptAir Airbus A320, faded from contact on Thursday, 2:45 a.m. (Central European Summer Time) en route to Paris from Cairo. It disappeared from radar at 16 kilometers into Egyptian airspace and was traveling at 37,000 feet. The plane was carrying 59 passengers and 10 crew members. The report and confirmation from EgyptAir was made public at around 11:00 a.m. (Philippine Standard Time).

Churros aren't just limited to a chocolate dip (and we admit to loving those). These days, you can see all sorts of churros in the Metro, from churro popcorn to a heavenly churro cheesecake.

10. The 10 Relatives Every Pinoy Knows

Family reunions often mean an eclectic mix of colorful personalities, from the balikbayan cousin with a foreign twang to the Master Chef Tita who'll make sure no one goes hungry, even for a second.