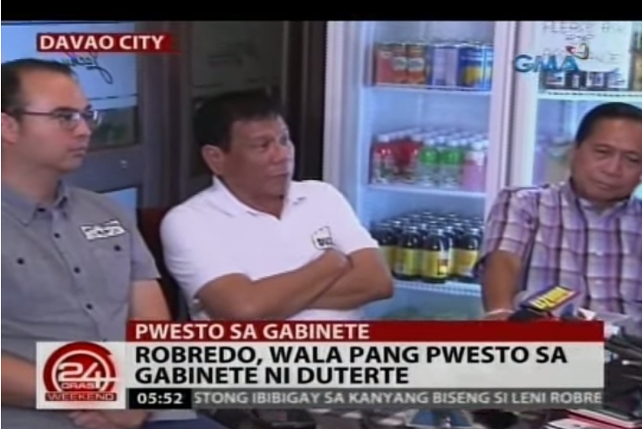 This is politics, after all. 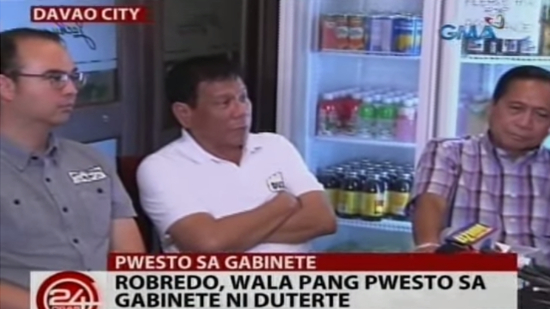 (SPOT.ph) President-elect Rodrigo Duterte will finally complete his Cabinet line-up this week after he unveils his remaining prospects for the key departments under his administration.

Duterte said the big reveal will be on Tuesday, May 31, when he names his candidates for the Defense, Interior, and Customs positions, along with the head of the Philippine Drug Enforcement Agency, the Philippine Daily Inquirer reported.

However, this leaves questions whether he will be offering a Cabinet slot to vice president-elect Leni Robredo, who campaigned under the former administration's Liberal Party.

In an interview with GMA News, Duterte made it clear that he has yet to decide whether a Cabinet position will be given to Robredo. “I have not considered anything for her because I'm more worried about where I would place the friends that nagka-utang ako ng loob,” he said.

Robredo earlier said it was up to Duterte whether or not she should get a position, but she added that she will proceed and focus on anti-poverty programs.

Duterte and Robredo are set to be proclaimed as winners of the national elections this afternoon, May 30, at the joint session at the plenary hall of the Batasang Pambansa. Duterte has mentioned that he has no plans of attending the proclamation.

Cabinet Officials Duterte Cabinet Rodrigo Duterte
Your Guide to Thriving in This Strange New World
Staying
In? What to watch, what to eat, and where to shop from home
OR
Heading
Out? What you need to know to stay safe when heading out