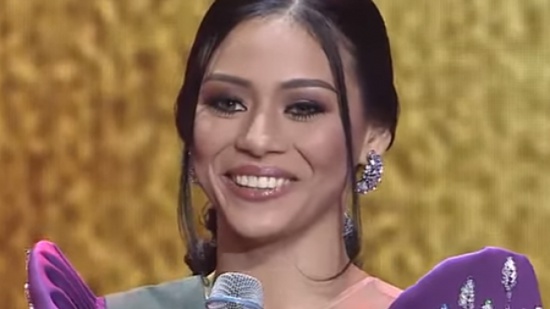 Miss Philippines-Earth candidate Bellatrix Tan became the talk of the town over the weekend when she answered a question about the El Niño and La Niña weather phenomena. (For context, this was what she said: "El Niño is what we are facing right now. If we do simple things like planting trees, then we will not experience drought, right? If we start now, we will achieve La Niña.") In an interview with DZMM on Monday, she defended herself, saying, "Sinabi ko na nga po doon sa host na alam ko kung ano ang La Niña, heavy rainfall. Hindi ko po ma-explain kung bakit ganoon po [ang naging pagsagot ko]."

When asked about her message to her critics, she replied, "Siguro try niyo sumali ng national pageant. You’ll know the feeling."

The Broadway smash hit Hamilton was a runaway winner at this year's Tony Awards, bagging a total of 11 awards, but falling short of breaking the record for the most awards (set by The Producers in 2001). The hip-hop musical took home all the major prizes including Best Musical, Best Lead Actor (Leslie Odom Jr.), Best Original Score, and Best Featured Actor.

Another Disney princess is headed to the big screen this year! The studio has unveiled the first trailer for Moana, whose titular character hails from the South Pacific and is voiced by newcomer Auli’i Cravalho. It tells of Moana's epic journey across the high seas to save her people. Along the way, she will team up with a demi-god named Maui (voiced by Dwayne Johnson). It will also feature original music by Hamilton creator and star Lin-Manuel Miranda. The film hits theaters in November.

Teen star Liza Soberano denied rumors that Marvel offered her the role of Mary Jane Watson in the studio's upcoming standalone film for Spider-Man. "It’s not really an invitation. I think it was what the fans wanted...fans of Marvel. I think one of them is Pinay and parang she tweeted [saying] kung merong magiging Mary Jane Watson, she would want it to be me," she told ABS-CBN. "[If I receive an offer], I would love that. That would be a nice opportunity."

A funny video presents the common onstage methods of TED Talk speakers, from walking to the center of the stage with clasped hands to flashing huge words on the screen. It's so believable, you would think it's an actual TED Talk presentation.

The Philippine Atmospheric, Geophysical, and Astronomical Services Administration, in partnership with Komisyon sa Wikang Filipino, launched on Monday, June 13 the Patnubay sa Weder Forkasting, a Filipino dictionary of technical weather terms. The language agency compiled weather terms both in English, Filipino, and other Philippine languages like Ilokano and Bikolano for the said publication.

Chinese Coast Guard barred Filipino youth group Kalayaan Atin Ito from planting a Philippine flag on Panatag Shoal on June 12 to celebrate Independence Day. Fifteen Filipino members and an American volunteer were aboard a fishing boat when Chinese personnel stopped them from proceeding to the shoal.

8. DepEd says first day of school year was one of the best

Outgoing Education Sec. Armin Luistro said that they did not see any glitches during the first day of the implementation of the senior high school program. “Sa akin lang ha, ito ang one of the best openings ng school year. Wala akong masyadong narinig, kahit sa mga media reports, na malakihan at malawakang problema,” he said in a press conference.

Follow our country's best children's book illustrators and see their work-in-progress sketches, things that inspire them, or even funny moments from their daily lives. Here are 10 Filipino illustrators that you should check out on Instagram.

Who says you need to break the bank to take good care of your skin? We round up 10 beauty products that are easy on the budget, and give you the proper skincare you need.