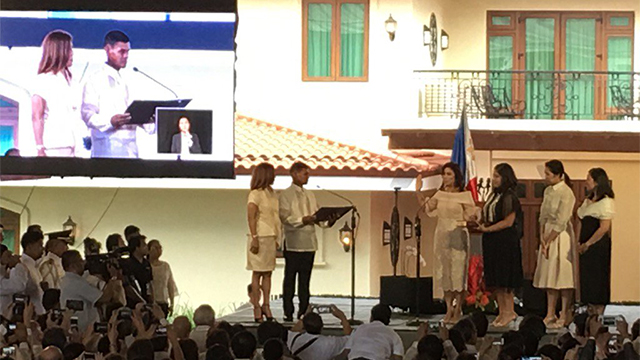 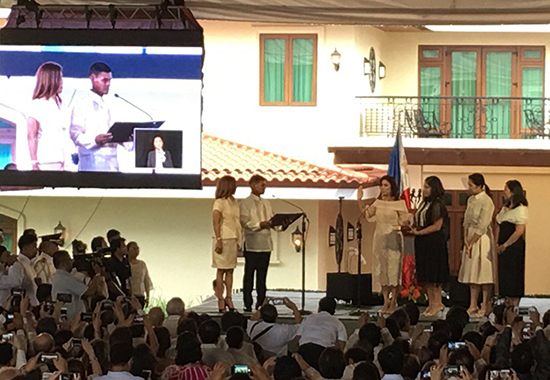 (SPOT.ph) Thanks to live streaming, public viewing, and other platforms, the whole nation witnessed the inauguration of the new Vice President of the Philippine Republic, Maria Leonor Gerona Robredo. The oath-taking held on June 30, 9 a.m. at the Quezon City Reception House (a.k.a. Boracay Mansion) in New Manila, Quezon City was attended by about 300 guests. But, more than the VIPs, to be noted in the ceremonies is the attendance of what Leni refers to as "nasa laylayan," or the marginalized sectors of the society. "Ang sandaling ito ay hindi lang tungkol sa akin, ito ang ating pagkakataon na makasama ang nasa laylalan tungo sa mas maginhawang buhay," she said in her first message to the people as the newly inaugurated vice president.

The program started with a flag-raising ceremony led by Bangsamoro leader Jehanne Mutin, Sumilao farmer Bajekjek Merida, Urban poor leader Alice Murphy, and PWD representative Gabriel Querubin. An ecumenical service led by various faith leaders from northern to southern Philippines followed: a Christian prayer by campaign volunteer Cyleen Velasquez, an Ifugao prayer by IP leader Delfin Dimog Dulnuan, a Muslim prayer by National Commission on Muslim Filipinos head Hon. Uztadz Abdulhadi T. Daguit, and a Catholic prayer by Sr. Cho B. Borromeo, FMM. Barangay Captain Ronaldo Coner of Punta Tarawal—one of the poorest communities in the Bicol region—in Camarines Sur administered her oath. Robredo previously said that Coner would symbolize her advocacy of giving a face and voice to people on the fringes of the society. Right next to him during the oath-taking was Barangay Captain Regina Celeste San Miguel of Mariana, Quezon City, the location of the Reception House.

Robredo also recognized some of the people who helped her in her campaign: Nanay Alberta "na nagsangla ng singsing," the Sumilao Farmers who marched from Bukidnon to Manila in April to support her campaign, and the father and son "na pinagtagpi-tagpi ulit ang napunit nating posters."

"Pagsama-samahin natin ang ating kakayahan para makabuo tayo ng makabuluhang pag-unlad," called Leni. It was only apt that one of the songs played at the end of the inauguration ceremony was "Isang Lahi, Isang Dugo, Isang Musika," which highlighted the country's need to be united: "Ikaw at ako tayo ay Pilipino, isang bansa ba’t di magkaisa."