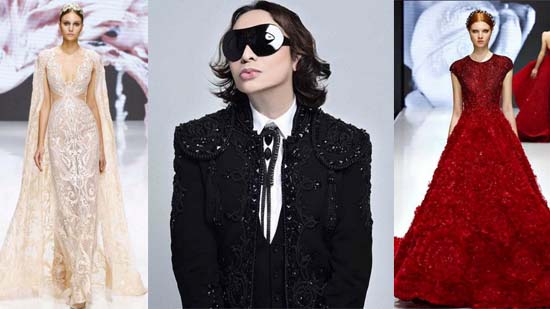 Michael Cinco made waves at Paris Fashion Week last Sunday, July 3, after receiving a standing ovation for 30 couture dresses and gowns that he showcased on the ramp at L’Orangerie Ephmre in Le Jardin des Tuileries. “The whole experience is a dream come true,” Cinco told The National. “I am very thankful for such a humbling opportunity.”

Marian Rivera admitted to turning down a new primetime soap offer by GMA to focus on taking care of her seven-month old daughter, Baby Zia. The network also talked to her about extending her morning show, Yan Ang Morning, to which she agreed to but only for a few weeks. “Lumalaki kasi yung anak ko. Sa stage na ito, hindi ko kayang iwan,” Rivera told PEP.ph.

4. J.K. Rowling has already written a sequel to Fantastic Beasts

J.K. Rowling reportedly already has the sequel to her upcoming film, Fantastic Beasts and Where to Find Them. According to David Yates, the man who worked with Rowling on the last four Harry Potter films and partnering with her as director of Fantastic Beasts, the novelist has already finished the script for the prequel’s sequel. “She’s done with the first one. She’s written the second one. She’s got ideas for the third one,” Yates told Reuters.

5. Mischievous hound steals man's phone, gleefully refuses to give it back

"The world's worst dog...and I still wouldn't change him." wrote Eimear O'Donnell on Facebook after uploading a video of his brother, Sean O'Donnell, chasing after their dog who got hand (paw?) of Sean’s phone. Watch the undeniably fun video.

In President Rodrigo Duterte’s speech at the 69th anniversary of the Philippine Air Force, he named five police generals who are allegedly involved in the trade of illegal drugs and ordered for them to be relieved from their posts. Included in the roster of those generals was former Philippine National Police (PNP) deputy Director General Marcelo Garbo, Jr., who Duterte called a “protector of drug syndicates.” The other four police generals were identified as Vicente Loot, Bernardo Diaz, Edgardo Tinio and Joel Pagdilao. Garbo and Loot have already left the police service.

Flooding across central and southern China over the past week has left almost 130 people dead, damaged more than 1.9 million hectares of crops, and led to direct economic loss of over 38 billion yuan or approximately $5.70 billion. Premier Li Keqiang visited Anhui, one of the hardest-hit provinces to meet residents and encourages officials to do everything they can to protect the life and livelihoods of people.

The world has been a little bit...scary, lately. And with everything that's been happening, it's important to keep calm and find your inner peace. Yoga studios have been popping up all over Metro Manila, and if you've been looking to try it out, here's a list of useful (not to mention, cute!) yoga essentials.

Do you remember when you used to schedule your days according to the time you needed to harvest your crops on Farmville? Oh, those were the good ol' days when games were actual games and player wasn't a term for your ex. From Typing Maniac to Friends For Sale, we give a rundown of the Facebook games we all used to love.

10thingsyoumighthavemissed News Showbiz Features Metro Manila News
Your Guide to Thriving in This Strange New World
Staying
In? What to watch, what to eat, and where to shop from home
OR
Heading
Out? What you need to know to stay safe when heading out