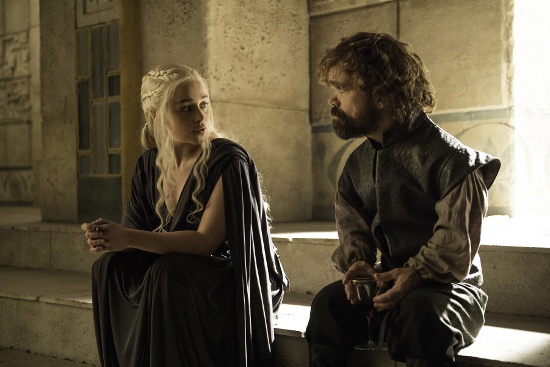 1. Game of Thrones Season 7 has been delayed

Bad news, Thrones fans. According to creators David Benioff and DB Weiss, production for Season 7 will be delayed in anticipation of "some winter weather." An exact airing date has yet to be announced, but the previous six seasons have all premiered between March 31 and April 24. It's going to be a looong wait.

According to a report from ABS-CBN's Marie Lozano, Kathryn Bernardo and Daniel Padilla are now "exclusive." However, Padilla made it clear that they are not yet in a relationship, saying, "May hinihintay pa kami na something kaya hindi pa malagyan ng label. Maaga pa sa ngayon. May mga gagawin pa kami and may tamang moments para doon." The two have a still-untitled Star Cinema film directed by Olivia M. Lamasan.

For many of us who are still quite confused over the new relationship between Tom Hiddleston and Taylor Swift, we finally have a celebrity who gets how we all feel. Ryan Reynolds and Blake Lively were among the stars spotted during Swift's epic Fourth of July celebrations, but unlike the other celebrities, Reynolds doesn't seem to be as thrilled about being part of her squad. The evidence? This single snapshot of his facial expression that quickly went viral.

4. Pokemon Go is now rolling out for iOS and Android

Gamers, get ready to relive your childhood! The augmented reality game Pokemon Go is steadily rolling out for both iOS and Android. The new app first went live in New Zealand and Australia yesterday, July 6, and is now available in the U.S. It's still unclear when the app will launch in the U.K., Canada, or other markets. The game uses your smartphone to place Pokémon in the real world, so it's like being a real-life trainer!

Carmelito Isidro, a farmer living in Sitio Anuling, Pamucutan, Zamboanga City, claimed that he caught a man in the act of raping his expectant cow on Saturday, July 2. In a report by Zamboanga Today, he narrated that he was bothered by the nonstop barking of his dogs at past 8 p.m. so he went to check what was happening. When the man "attacking" Isidro's cow sensed Isidro's presence, he immediately ran and left behind his jacket and phone which led to his identification. The suspect, known in their community as Jose, is now the subject of a manhunt and will be facing charges under the Animal Welfare Act.

Vice Mayor Paolo Duterte confirmed on Thursday, July 7, that Davao City has received threats from ISIS, the international terrorist organization responsible for various deadly attacks in different countries. The Armed Forces of the Philippines, however, said that they have yet to verify the reports. Duterte, who is acting as mayor while Mayor Sara Duterte is on leave, has directed the police to secure key entry and exit points to the city.

8. Duterte ends tanim-bala scheme once and for all

President Rodrigo Duterte prohibited authorities from arresting passengers caught with bullets in their luggage. Travelers will instead undergo immediate profiling to clear them of criminal intentions, explained Senior Superintendent Mao Aplasca, new director of the police Aviation Security Group. They will also be allowed to immediately board their flight if no firearm is confiscated.

The Premium Point-to-Point Bus Service was launched in an effort to ease the traffic congestion happening every day along EDSA. We list down what you need to know about it—from schedule to fare matrix. Conquer the Metro with this guide.

You don't need a significant other to be cheesy. We round up 10 places that will satisfy your craving, whether it's pizza, macaroni, or a sandwich.

News Showbiz Features Politics Manila Metro Manila News 10thingsyoumighthavemissed
Your Guide to Thriving in This Strange New World
Staying
In? What to watch, what to eat, and where to shop from home
OR
Heading
Out? What you need to know to stay safe when heading out