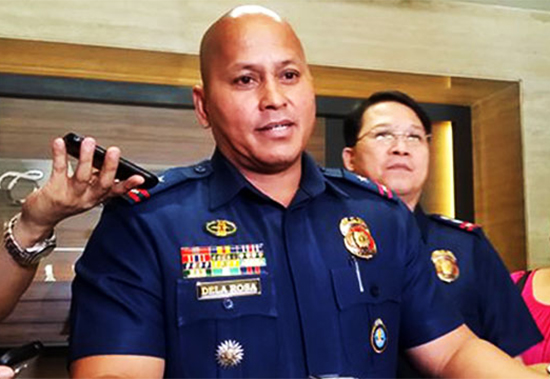 1. PNP chief admits having a crush on Angel Locsin

Philippine National Police Director General Ronaldo "Bato" Dela Rosa admitted having a crush on Angel Locsin on Umagang Kay Ganda on Thursday, July 7. He also said that he hopes Locsin will be portraying Darna again and he joked that he would get in trouble with his wife if they continued to go back to the subject. Dela Rosa also named Robin Padilla and Cesar Montano as the action stars that he would want to portray him in a biopic if given the chance.

Good news, gamers! Another installment of the Tomb Raider franchise will be released on March 18, 2018. The movie will star Alicia Vikander as Lara Croft. The film will be co-produced by MGM and Warner Bros who recently aquired the rights from GK films.

Homophobia is slowly becoming a thing of the past as the Star Trek franchise portrays Hikaru Sulu's character as the first openly gay role in the series. John Cho, who plays Sulu's character in Star Trek Beyond, says that his character has a daughter and a partner. Cho also stated that the decision made by writer Simon Pegg and director Justin Lin was a nod to George Takei's coming out in 2005.

Living the dream or abusing it? We can't decide! Yuko Kinoshita (a.k.a. Japan's Gluttonous Beautiful Woman) once again wows her audience as she takes hogging McNuggets to another level. We're all guilty of eating an entire pack of nuggets all by ourselves, but no one has probably done what she has which is eating 150 pieces of deep-fried goodness in one sitting and also providing reviews for sauces. Yes, sauces.

5. A planet with three stars has been discovered

A team of astronomers announced on Thursday, July 7, the discovery of a planet that orbits around three suns. HD 131399Ab is a cosmic body located 340 light years from Earth in the constellation Centaurus. It is one of the youngest planets to be discovered outside of our solar system. The planet was discovered by Kevin Wagner, a first-year PhD student at the University of Arizona.

6. Butchoy will exit PAR by Saturday, according to PAGASA

Typhoon Butchoy (Nepartak) weakens slightly as it nears landfall on Southeast Taiwan early on Friday, July 8, according to the state weather bureau. Despite its slightly weakened state, Butchoy will continue to strengthen the southwest monsoon and bring moderate to occasionally heavy rains to the provinces of Zambales, Bataan, Batangas, Cavite, and Mindoro. Fortunately, it will be exiting the Philippine Area of Responsibility by Saturday, July 9.

7. Andres Bautista to be blamed for COMELEC hacking

Commissioner Rowena Guanzon said that Commission on Elections chair Andres Bautista should take full responsibility for a data hacking breach of the poll body’s website. Bautista and fellow commissioners Christian Robert Lim and Al Parreño were summoned by the National Privacy Commission to find out how the database of 55 million voters was publicly posted online on March 27.

The operations of two nickel ore mines in Benguet and Zambales are to be suspended, according to Mines and Geosciences Bureaus Director Leo Jasareno. The mines were found in violation of environmental regulations after a month-long audit. President Rodrigo Duterte has previously warned that he would cancel mining projects that would cause environmental harm.

We asked our readers to share with us their food discoveries over social media and what we saw was good! These posts will make you want to ruin your diet. Proceed with care.

10. 10 Sandwiches That You Need to Know About

We round up sandwiches—aside from the Cubanos, grilled cheese, and even the local pan de sals—that you should definitely try. These deserve to be on your radar.

Metro Manila News Features Showbiz News 10thingsyoumissed
Your Guide to Thriving in This Strange New World
Staying
In? What to watch, what to eat, and where to shop from home
OR
Heading
Out? What you need to know to stay safe when heading out