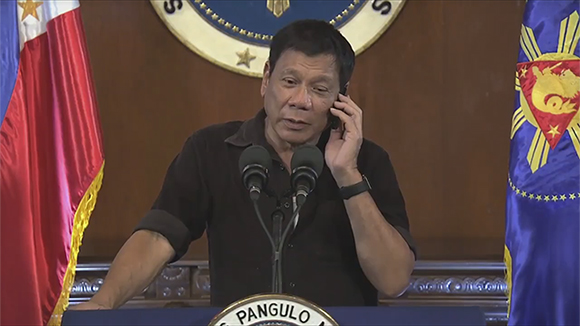 (SPOT.ph) Remember when your recruitment officer said, “We’ll call you,” after a job interview? Well, President Rodrigo Duterte gave it a different spin.

Duterte previously drew flak for not giving Vice President Leni Robredo a cabinet position in his administration. He even said in a press conference in Davao City on May 31: "Alam mo, wala ako talaga. I am...non-commital ako diyan. You know why? Kilala ko si Bongbong Marcos, I do not want to hurt him. Si Leni, she should understand that she belongs to the opposite side. There is no law that exists that is a compelling reason for her to be a member of the Cabinet." It even took too long before the president met up with the vice president after they've been elected.

So, it was a welcome surprise when Duterte finally called Robredo about a job offer. "Do you have the number of Leni? Call her," he said while behind the mic in the middle of a press conference on Thursday afternoon, July 7, in Malacañang. The video was posted on the Facebook page of the Presidential Broadcast Staff-Radio Television Malacañang.

"Alam mo ma'am kasi, tinawagan kita para mahinto na itong tanong-tanong. Kaya nga e. Do not be apologetic. Gusto ko na itong...tanong nang tanong, tanong nang tanong. Pwede ka housing, ma'am? Can you be the housing secretary? Tanggapin mo, ma'am?" Robredo's response was inaudible, but in a briefing held much later, Justice Sec. Vitaliano Aguirre II said that the vice president accepted the offer. "The [previous] meeting between the two was very amiable. I believe that was the key for the president to offer her a position," he added when asked about Duterte's change of heart.

Cabinet Duterte Robredo
Your Guide to Thriving in This Strange New World
Staying
In? What to watch, what to eat, and where to shop from home
OR
Heading
Out? What you need to know to stay safe when heading out