Looks like Manny Pacquiao won't be retiring from boxing after all 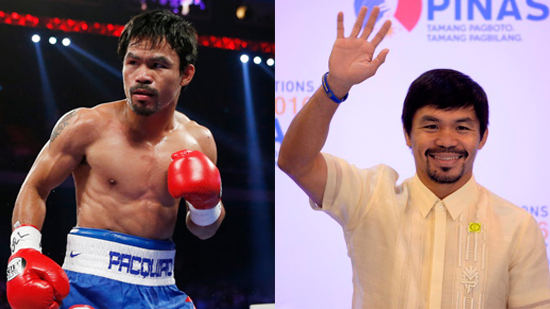 (SPOT.ph) Sen. Manny Pacquiao has made headlines again after his camp announced the possibility of another match for the supposedly-retired boxer on Tuesday, July 12. It’s not the first time that the former Sarangani representative made confusing statements. Here’s a quick look at of some of them.

When he said he would retire

Pacquiao formally announced his retirement after a unanimous-decision victory over Timothy Bradley in April 2016. “Yes, I am retired. I want to go home to my family and serve the people,” he said in a post-fight press conference. “My heart is 50/50. I might enjoy my retired life or I might want to come back. It’s hard to say because I’m not there yet. But right now my decision is to retire,” he added.

Two months later, rumblings of a comeback surfaced when it was reported that Pacquiao's longtime promoter, Bob Arum, reserved the Mandalay Bay Events Center in Las Vegas for an October 15 fight. On Tuesday night, July 6, Arum told the Guardian that “[Pacquiao] now has given [them] the go-ahead to shop for a venue and an opponent and see if [they] can do it on a particular date or dates.” They would also have to consider the dates when Pacquiao can take a leave of absence from the Senate for three weeks to complete his training in the U.S.

When he said that people shouldn't vote for him anymore

Pacquiao went on to win a seat in the Senate in the May 2016 elections.

He immediately drew flak for the statement, which led to Nike dropping their endorsement deal with the boxing champ.

A day after, he posted on his Instagram account, "I'm sorry for hurting people by comparing homosexuals to animals. Please forgive me for those I've hurt. I still stand on my belief that I'm against same sex marriage because of what the Bible says, but I'm not condemning LGBT. I love you all with the love of the Lord. God Bless you all and I'm praying for you."

Metro Manila News Pacquiao Senate Congress Lgbt
Your Guide to Thriving in This Strange New World
Staying
In? What to watch, what to eat, and where to shop from home
OR
Heading
Out? What you need to know to stay safe when heading out