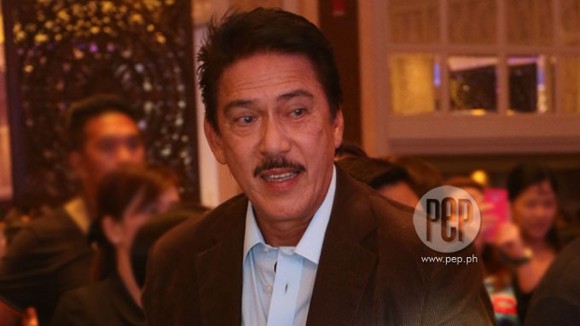 In an interview with TV5's Aksyon Tonite on July 13, Sen. Tito Sotto clarified a statement that led to a social media uproar and later, an MTRCB probe into the Eat Bulaga episode. "It was a simple reaction saying that a married lady should not be out at night having shots [sic] with men other than her husband," he explained. Sotto came under fire for criticizing a guest on the show, who said she was taken advantage of while drinking. Sotto had chastised her, saying, "Kababae mong tao, pa-shot-shot ka."

When Star Trek actor John Cho announced that his character Sulu was gay, the news wasn't exactly met with enthusiasm by veteran George Takei (who originally played the role in the series and movies). The openly gay 79-year-old stated his preference that they create an entirely new gay character. On Thursday, he took to his Facebook page to clarify his statement, reiterating his earlier point but adding, "I am not disappointed that there is a gay Star Trek character [...] I wish John Cho well in the role I once played, and congratulate Simon Pegg on his daring and groundbreaking storytelling. While I would have gone with the development of a new character in this instance, I do fully understand and appreciate what they are doing."

Actress Isabelle Daza took to her Instagram account to announce that her father, Bong Daza, had passed away. Although she did not disclose the reason behind his passing, he had reportedly suffered a heart attack last week. Daza was the ex-husband of Miss Universe-slash-actress Gloria Diaz, and the son of culinary icon Nora Daza.

According to an apps analytics company called Sensor Tower, iPhone users have spent more time playing Nintendo's viral Pokemon Go than browsing social media. On average, players reportedly spent over 33 minutes playing the game, but only spent 22 minutes on Facebook and 18 minutes on Snapchat. However, it's worth noting that the data was taken just one day after the release of the game.

5. Man marries his smartphone with rings and all

Aaron Chervenak married his smartphone in a small ceremony in Las Vegas. He said that he wanted to prove a point and show people "how precious our phones are becoming." The wedding, as reported, is not legally binding.

Looks like China is as sour as the Philippines' green mangoes after the international arbitration tribunal ruled that their country's claim on the nine-dash demarcation line in the West Philippine Sea is illegal. Some Chinese expressed anger via social media, with posts saying they will boycott Philippine imports such as mangoes and bananas or cancel holiday plans to the Philippines, while others suggested that the Chinese government impose economic sanctions on the Philippines.

In a press conference on Thursday, July 14, Vice President Leni Robredo denied having a "secret meeting" with Commission on Elections chairman Andres Bautista as claimed by a video circulated by the Dayaang Matuwid Facebook page. The clip shows that both Robredo and Bautista supposedly met in secret on the 10th floor of the Urdaneta Apartments in Makati on July 12, the same day that the Supreme Court ordered the vice president to submit her reply to the electoral protest filed by Sen. Bongbong Marcos. According to Robredo, she and her daughters attended a dinner party in the building with about 40 people, Bautista included.

8. Eight out of 10 Filipinos trust Duterte

In a nationwide poll conducted on June 24 to 27, days before President Rodrigo Duterte formally assumed presidency on June 30, it was revealed that 84% of Filipinos have "much trust" on the national leader. The survey was carried out by the Social Weather Stations on 1,200 respondents from a variety of income classes, age groups, and educational attainments. “I’m sure he would appreciate the trust and he would say, if I know him, na ‘trabaho lang ‘yan, that’s part of the job and that we will continue to do our part,’” Presidential spokesman Ernesto Abella said when asked about the president's reaction.

Let's face it; movie tickets don't always come cheap. Don't let a tight budget keep you from seeing a good movie or two! We round up 10 places in Manila that let you catch a film without spending a single peso.

Metro Manila News 10thingsyoumissed Politics Features Showbiz News
Your Guide to Thriving in This Strange New World
Staying
In? What to watch, what to eat, and where to shop from home
OR
Heading
Out? What you need to know to stay safe when heading out